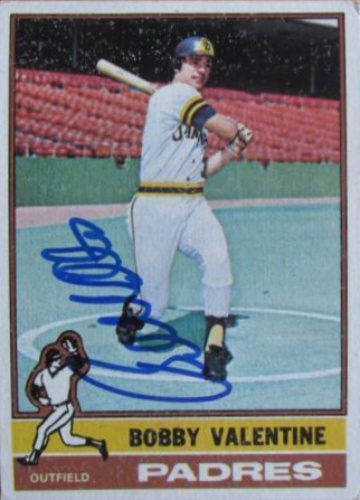 Current items with a signature of Bobby Valentine

These are the most current items with a signature of Bobby Valentine that were listed on eBay and on other online stores - click here for more items.

Traded items with a signature of Bobby Valentine

Most recently, these items with a signature of Bobby Valentine were sold on eBay - click here for more items.

City manager? Bobby V. in hometown mayor race (05/07/21): Bobby Valentine, who served as manager of the Rangers, Mets and Red Sox in addition to winning a Japan Series title and serving as AD at Sacred Heart University, is running for mayor in Stamford, Connecticut.

Bobby Valentine Congratulates the Giants and Takes a Shot at the Red Sox in the (10/2014): Heres the thing as it pertains to Bobby Valentines perceived slight at his former employer: He wasnt exactly rooting against the Red Sox last year as they went on to win the World Series.

Bobby Valentine: Lucky Fella (09/2014): Bobby Valentine, the Stamford native who has had a storied career as a professional baseball player and manager, told the Westport Rotary Club today that much of his success can be attributed to luck and being in the right place at the right time.

Happy 15th anniversary to Bobby Valentine's mustache disguise (06/2014): June 9, 1999. An otherwise normal day on the MLB calendar turned historically significant when Mets manager Bobby Valentine found the most creative of ways to respond to an ejection.

Bobby Valentine mentors Weston Middle School student (04/2014): What first captivated me about Bobby Valentine — the former MLB player and manager — was his indescribable voice. Its comfort producing tone is something that everyone must experience for themselves.

Bobby Valentine to Join Titan's Hot Stove Dinner (03/2014): TORRINGTON - One of Connecticut's most storied professional athletes is coming to town as a special guest at an upcoming fundrasier for the Torrington Titans.

Bobby Valentine says Masahiro Tanaka worth $100M for Yanks (01/2014): Now, the big players for Tanaka could essentially be down to two clubs – the Yankees and Dodgers – for the privilege of paying the 25-year-old right-hander more than $100 million for at least six years.

Bobby Valentine Likes What He Sees In Westport Players (08/2013): STAMFORD, Conn. – Bobby Valentine loves the way Westport is embracing its appearance in the Little League World Series. “It looks like they are Little League players who are really enjoying it,’’ said Valentine, now the athletic director at Sacred Heart ...

Bobby Valentine: 'Connie Mack wouldn't have won with that team' (02/2013): FAIRFIELD, Conn. (AP) -- It didn't take long for Bobby Valentine to move past his year to forget in Boston. Of course, there was a new challenge to help him along the way.

Report: Bobby Valentine A Candidate For Sacred Heart Athletic Director Position (01/2013): Two years ago, Bobby Valentine was on ESPN. Last year, he managed the Boston Red Sox. This upcoming year, he may be ... the athletic director of a small New England college?

Bobby Valentine to speak at college foundation gala (11/2012): Making your way up from the high school baseball team, through the major leagues and to the position of manager of the New York Mets and Boston Red Sox does not come easily. But hard work, dedication and a never-give-up spirit can make it happen.

Bobby Valentine angers Red Sox Nation, and more sports from last night (10/2012): Welcome to your discussion forum: Click the login link below to sign in with or to set up a Disqus account or to access your social networking account. When you do, your comment should be posted immediately, provided it meets the guidelines.

Bobby Valentine Struggling With Dismal Red Sox Start (04/2012): Manager Bobby Valentine is struggling in his first season in Boston, with the Red Sox off to a 4-10 start.

Sports people: Bobby Valentine, Maria Sharapova (03/2012): Bobby Valentine The new Red Sox manager seems intent on keeping the most tiresome rivalry in baseball alive. After the Yankees called their spring training game Thursday because they said they were out of pitchers,...

Bobby Valentine is Red Sox new manager (11/2011): BOSTON -- Players eating fried chicken and drinking beer in the clubhouse during games. If it didn't bother Bobby Valentine as a baseball lifer, it would certainly offend his sensibilities as a self-proclaimed gourmet chef.

Bobby Valentine to be Featured at Celebrity Breakfast June 10 (05/2011): It is just three weeks to the Danbury Westerners 2011 New England Collegiate Baseball League season and excitement is building as the club readies its line-up for the 40+ game schedule.

College Park's Ellingson named to Bobby Valentine All-American team (04/2011): David Ellingson may only be a sophomore, but he’s already getting noticed.

Bobby Valentine trying to help Japanese friends after quake (03/2011): Bobby Valentine has been working on little sleep since Japan was devastated by an earthquake and tsunami last week, devoting much of his time to tracking down friends and former players and figuring out a way to help from thousands of miles away.

Report: Bobby Valentine considering buying a share of Mets (02/2011): Valentine, whose appointment as the city's public safety director is scheduled to go before the Board of Representatives Tuesday night, is considering a bid to buy a portion of the team he managed to its most recent World Series appearance, according to a published report.

In wake of storm, Bobby Valentine serves as Stamford traffic cop (01/2011): The former Mets manager, who now doubles as Stamford's Director of Public Safety and an ESPN baseball analyst, took to the streets Thursday morning and served as a traffic cop near an I-95 on-ramp.

Bobby Valentine to keynote winter banquet (12/2010): St. John’s University hit a home run and scored one of baseball’s most dynamic minds to warm up their winter celebration.