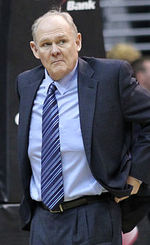 George Matthew Karl (born May 12, 1951) is an American former professional basketball coach and player. After spending five years as a player for the San Antonio Spurs, Karl became an assistant with the team before getting the chance to become a head coach in 1981 with the Continental Basketball Association. Three years later, he became one of the youngest NBA head coaches in history when he was named coach of the Cleveland Cavaliers at age 33. By the time his coaching career came to an end in 2016, Karl would coach for nine different teams in three different leagues (CBA, NBA, Liga ACB), which included being named Coach of the Year three combined times (twice in the CBA and once in the NBA) with one championship in the FIBA Saporta Cup. He is one of nine coaches in NBA history to have won 1,000 NBA games and was named NBA Coach of the Year for the 2012-13 season. While he never won an NBA championship, Karl made the postseason 22 times with five different teams, which included a trip to the 1996 NBA Finals with the Seattle SuperSonics. More about George Karl

Current items with a signature of George Karl

These are the most current items with a signature of George Karl that were listed on eBay and on other online stores - click here for more items.

Traded items with a signature of George Karl

The most expensive item with a signature of George Karl (2011-12 EXQUISITE ENDORSEMENTS GEORGE KARL Auto autograph Holofoil SSP #4/5 UNC) was sold in August 2022 for $150.00 while the cheapest item (GEORGE KARL - Authentic Signed Autograph Denver Nuggets Coach 3.5X5 Photo wCOA) found a new owner for $0.43 in March 2018. The month with the most items sold (2) was March 2014 with an average selling price of $22.47 for an autographed item of George Karl. Sold items reached their highest average selling price in August 2011 with $29.99 and the month that saw the lowest prices with $0.99 was August 2016. In average, an autographed item from George Karl is worth $9.95.

Most recently, these items with a signature of George Karl were sold on eBay - click here for more items.