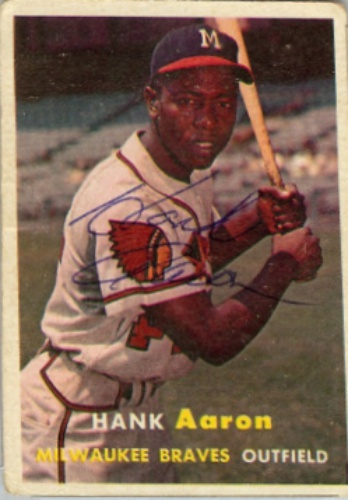 Henry Louis Aaron (February 5, 1934 – January 22, 2021), nicknamed "Hammer" or "Hammerin' Hank", was an American professional baseball right fielder who played 23 seasons in Major League Baseball (MLB), from 1954 through 1976. Widely regarded as one of the greatest baseball players in history, he spent 21 seasons with the Milwaukee/Atlanta Braves in the National League (NL) and two seasons with the Milwaukee Brewers in the American League (AL). More about Hank Aaron

Current items with a signature of Hank Aaron

These are the most current items with a signature of Hank Aaron that were listed on eBay and on other online stores - click here for more items.

Traded items with a signature of Hank Aaron

If you're interested in Hank Aaron Rookie cards you might want to take a look at our sister site that specializes in Baseball Rookie Cards only.

Most recently, these items with a signature of Hank Aaron were sold on eBay - click here for more items.

Aaron remembered in ceremony at Braves' park (01/26/21): Manager Brian Snitker and Hall of Famer Chipper Jones were among the Braves luminaries who credited Hank Aaron for their success as part of the memorial ceremony for the late slugger.

Hank Aaron's life celebrated in memorial service at Braves' Truist Park (01/26/21): Chipper Jones, Marquis Grissom and Brian Snitker were among those who eulogized the legendary slugger

Hank Aaron memorial service will be held at Braves' Truist Park on Tuesday (01/25/21): A burial service for the MLB legend is scheduled for Wednesday

Hank Aaron death: Why the Atlanta Braves should change their name to honor the l (01/2021): Aaron's death at the age of 86 was announced on Friday

Hank Aaron on hand as hopeful Braves ramp up (02/2020): Hank Aaron's appearance added excitement to what is already a highly anticipated spring for the Braves.

Thoughts On the Red Sox Accepting a White House Visit (12/2018): The final pitch of the 2018 World Series was devastating, an unhittable 84 mile per hour slider from Chris Sale with 7 inches of…

Pastor, Leave Sports Out of the Pulpit. Here’s Why (11/2018): There's really only one scenario where you should ever mention a specific sports team from the pulpit, and it's very unlikely this will ever happen at your church.

Report: Hank Aaron doesn't resent A-Rod, he's rooting for him (02/2015): Alex Rodriguez has a lot more enemies than friends these days, but he gained a powerful ally this week.

Council Approves Hank Aaron Funding (01/2015): The Mobile City Council approves nearly half-a-million dollars in additional funding for the home of the Bay Bears. The manager of the team says this will bring the stadium up to MLB standards.

Alabama Baseball Comes to Hank Aaron Stadium (11/2014): MOBILE, AL -- The Mobile BayBears Professional Baseball Club, in partnership with the Mobile Sports Authority, is proud to announce they will host the University of Alabama baseball team in a three games series against Lipscomb University at Hank Aaron Stadium, March 6-8, 2015.

Trout, Stanton win 2014 Hank Aaron Award (10/2014): Mike Trout of the Angels and Giancarlo Stanton of the Marlins were named the 2014 winners of the Hank Aaron Award, given annually to the most outstanding offensive performer in each league.

Baseball legend Hank Aaron meets Hank the Dog (08/2014): Remember Hank the Dog, the mutt that made headlines when he showed up at the Milwaukee Brewers’ spring training camp? It was determined that the dog had been hit by a car. He was taken to the veterinarian, where his injuries were treated.

10 Interesting Facts About Hank Aaron (06/2014): Hank Aaron is one of the best baseball players in the history of baseball. Here are 10 interesting facts about him. Contributor: Tom Harrington Published: Jun 16, 2014

Hank Aaron has partial hip replacement surgery (02/2014): ATLANTA (AP) - Hall of Famer Hank Aaron is recovering from a partial left hip replacement. The Atlanta Braves said Saturday the 80-year-old Aaron fell on ice on Friday and had the procedure later in the day. The Braves say Dr. Scott Gillogly, who performed the procedure, ...

Hank Aaron tweets? Yes, he does (01/2014): Hank Aaron has only tweeted eight times, but he made news with his last one by sending a message to Seattle Seahawks cornerback Richard Sherman.

Hank Aaron's 715th Home Run As You've Never Seen It (08/2013): Hank Aaron put up so many outrageous numbers over the course of his career that it makes 715 feel almost like an afterthought. Read more...

Jason Giambi breaks a record that Hank Aaron held (07/2013): Hear from a local kid about the game competition he won. Learn about a FREE back & neck pain seminar.

Hank Aaron Stadium now a... drop spot (11/2012): The Mobile BayBears and the US Marine's Toys for Tots program are proud to announce a partnership to make Hank Aaron Stadium a drop spot for this season's holiday toy drive. The drive will begin at "The Hank" on Monday, November 26th and run through Thursday, December 20th.

Dave May Dies at 68; Player in Hank Aaron Trade (10/2012): Mr. May, an outfielder for 12 seasons, was traded to Atlanta so that Hank Aaron could return to Milwaukee.

Hank Aaron to speak at TC's Founders' Weekend (09/2012): TALLADEGA — Hall of Famer Hank Aaron and his wife, Billye, will be the guest speakers for Talladega College’s Annual Founders Weekend Celebration. The weekend celebration will consist of activities to draw TC alumni, family and friends of the college together to commemorate its founding.

Hank Aaron shares words of wisdom (05/2012): Baseball legend Hank Aaron didn't have it easy on his way to the top, and he's telling new graduates not expect any handouts either.

Hank Aaron gives inspiring lecture at Notre Dame (12/2011): Hank Aaron was in Michiana on Tuesday and spoke to a full crowd at Notre Dame about athletics and entrepreneurship.

Hank Aaron Receives Honorary Princeton Degree (06/2011): Hall Of Famer Hank Aaron was eliminating color lines in Major League Baseball since its integration in 1954 with a grace that was unmatched. The home run king is being honored by Princeton University with an honorary degree.

John Milewski: Birthers, Racism, Barack Obama and Hank Aaron (04/2011): Is it possible that those who once threatened Hank Aaron's life have seen the light? Could some of them have actually voted for Barack Obama? People change, don't they?

Hank Aaron’s rookie card now worth the same as his rookie salary (02/2011): The Topps company turned 60 years old this year, which means it was only four when it produced Hank Aaron’s rookie card. If you have one, and have kept it in pristine shape, it could be worth as much as $5,000; or exactly the same as Aaron’s salary that season with the 1954 Milwaukee Braves.…