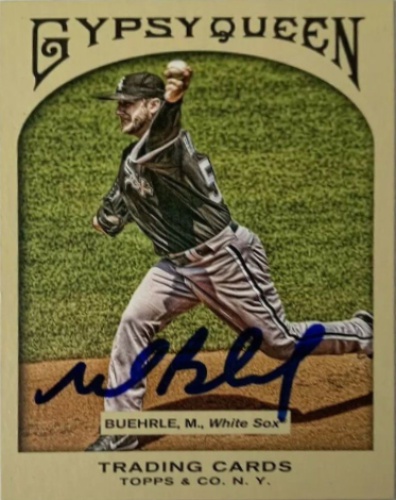 Mark Alan Buehrle (/ˈbɜːrli/; born March 23, 1979) is an American former professional baseball pitcher. He played the majority of his Major League Baseball (MLB) career with the Chicago White Sox, playing twelve seasons for the team and winning the World Series with them in 2005. Buehrle also pitched for the Miami Marlins and Toronto Blue Jays. More about Mark Buehrle

Current items with a signature of Mark Buehrle

These are the most current items with a signature of Mark Buehrle that were listed on eBay and on other online stores - click here for more items.

Traded items with a signature of Mark Buehrle

If you're interested in Mark Buehrle Rookie cards you might want to take a look at our sister site that specializes in Baseball Rookie Cards only.

The most expensive item with a signature of Mark Buehrle (Historic Mark Buehrle 2009 Perfect Game Signed Game Used Baseball Beckett COA) was sold in October 2021 for $5995.00 while the cheapest item (Mark Buehrle Signed Baseball Card) found a new owner for $0.01 in June 2014. The month with the most items sold (76) was July 2009 with an average selling price of $18.08 for an autographed item of Mark Buehrle. Sold items reached their highest average selling price in April 2019 with $799.99 and the month that saw the lowest prices with $1.47 was March 2009. In average, an autographed item from Mark Buehrle is worth $18.50.

Most recently, these items with a signature of Mark Buehrle were sold on eBay - click here for more items.

Let's get graphic: MLB must operate on Mark Buehrle speed (03/18/15): In its quest to speed up the pace of games, Major League Baseball should simply ask pitchers to imitate Mark Buehrle.

Toronto Blue Jays speedy pitcher Mark Buehrle actually gets rattled when he’s fo (03/08/15): Buehrle was born and bred to work quickly on the mound. Since he became a metronome starter in 2001, nobody has worked faster

Mark Buehrle tops 200 innings for 14th straight season (09/2014): And fittingly for the quick-working, soft-tossing southpaw, Wednesday's game was played in one hour and 59 minutes.

Toronto Blue Jays sweep Boston Red Sox as Mark Buehrle busts out of slump (07/2014): The Jays have a 10-3 record since the all-star break and have won four straight series

Blue Jays starter Mark Buehrle finds early chemistry with new catcher Dioner Nav (02/2014): The last time Mark Buehrle shook off a catcher’s sign was more than 10 years ago on a tour of Japan by a group of major-leaguers.

Toronto Blue Jays’ Mark Buehrle ends season on sour note with injury in loss to (09/2013): For the Blue Jays, even as this ghastly season grinds to a close, every day seems to spawn another injury story

Blue Jays’ Mark Buehrle continues hot streak with defeat of Royals (08/2013): After rough start to his tenure with the Toronto Blue Jays, Mark Buehrle has emerged as the team’s top starter

Mark Buehrle ‘old reliable’ for the Blue Jays (07/2013): Mark Buehrle calls it luck. Manager John Gibbons calls it anything but luck. Either way, they'll both take the outcome

The week in baseball: A perfect game for Mark Buehrle (06/2013): It has been a lucky week to be a baseball fan.

Mark Buehrle shines as Blue Jays beat Red Sox in ninth on Adam Lind homer (05/2013): In five of his seven previous starts, Mark Buehrle had struggled, falling behind hitters and giving up a bundle of homers

Mark Buehrle, Blue Jays fall victim to Yankees long ball (04/2013): Mark Buehrle was a mess in his first two starts as a Toronto Blue Jay. In his next two, he reverted to familiar form

Mark Buehrle gets some quality camp time with dog (02/2013): Mark Buehrle brought his dog, Slater - banned in Ontario but not the USA - to Blue Jays camp on Wednesday. / Paul White, USA TODAY Sports DUNEDIN, Fla. â?? A good day at spring training for Blue Jays pitcher Mark Buehrle also was a reminder of the downside of his trade to Toronto.

Mark Buehrle looks forward to joining Blue Jays (12/2012): The depth of the Toronto pitching staff has improved considerably with the addition of Buehrle and Josh Johnson.

Pit bull ban: Blue Jays pitcher Mark Buehrle should spend time here first before (11/2012): POLL: Whose side are you on? Do you wish Mark Buehrle success in changing Ontario’s pit bull ban or do you agree with Damien Cox that the pitcher needs to live here before telling us what to do?

Miami Marlins pitcher Mark Buehrle wins 4th Gold Glove (10/2012): Mark Buehrle is the third pitcher to win the Gold Glove in both leagues, winning the NL honor Tuesday. It was his fourth overall.

Miami Marlins’ Mark Buehrle has work remaining to reach 200 innings again (08/2012): Marlins left-hander Mark Buehrle is the only active pitcher in baseball to throw at least 200 innings in each of his last 11 seasons.

Mark Buehrle and Giancarlo Stanton lead Marlins over Phillies (06/2012): Before Saturday’s game, Marlins manager Ozzie Guillen was ruminating over his team’s solid play the past few days when he said, “I hope it’s not just a tease.

It was the third in White Sox's history, joining Mark Buehrle against Tampa Bay (04/2012): Phil Humber threw the first perfect game in the majors in almost two years, leading the Chicago White Sox to a 4-0 victory over the Seattle Mariners on Saturday.

Miami Marlins pitcher Mark Buehrle hopes to continue making quick work of batter (03/2012): Mark Buehrle’s quick-pace style has made him one of the most consistent starters in the majors. The Marlins are banking on his continued success.

Count Cubs among Mark Buehrle's many suitors (11/2011): MILWAUKEE - Benedict Buehrle. Fairly or not, that's how Mark Buehrle, one of the greatest White Sox players...

Mark Buehrle makes quick work of Twins for White Sox (08/2011): CHICAGO — With the way Tyler Flowers is playing, putting him in charge wasn’t a bad idea by Mark Buehrle.