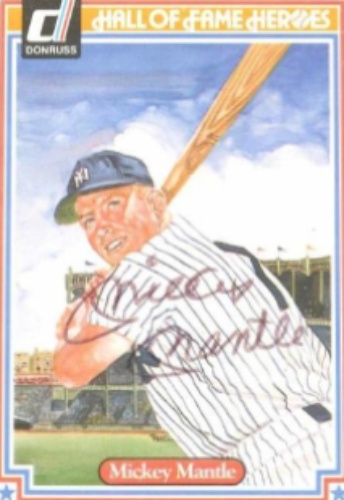 Mickey Charles Mantle (October 20, 1931 – August 13, 1995), nicknamed "the Commerce Comet" and "the Mick", was an American professional baseball player. Mantle played his entire Major League Baseball (MLB) career (1951–1968) with the New York Yankees as a center fielder, right fielder, and first baseman. Mantle was one of the best players and sluggers and is regarded by many as the greatest switch hitter in baseball history. Mantle was inducted into the Baseball Hall of Fame in 1974 and was elected to the Major League Baseball All-Century Team in 1999. More about Mickey Mantle

Current items with a signature of Mickey Mantle

These are the most current items with a signature of Mickey Mantle that were listed on eBay and on other online stores - click here for more items.

Traded items with a signature of Mickey Mantle

If you're interested in Mickey Mantle Rookie cards you might want to take a look at our sister site that specializes in Baseball Rookie Cards only.

The most expensive item with a signature of Mickey Mantle (1951 Bowman MICKEY MANTLE Rookie New York Yankees Signed Auto PSA DNA 8) was sold in November 2022 for $70000.00 while the cheapest item (MICKEY MANTLE SIGNED AUTOGRAPHED COLOR PHOTO ON WOOD PLAQUE WITH COA) found a new owner for $0.01 in March 2019. The month with the most items sold (155) was May 2020 with an average selling price of $192.50 for an autographed item of Mickey Mantle. Sold items reached their highest average selling price in March 2012 with $890.50 and the month that saw the lowest prices with $36.00 was May 2019. In average, an autographed item from Mickey Mantle is worth $225.00.

Most recently, these items with a signature of Mickey Mantle were sold on eBay - click here for more items.

Mickey Mantle 1952 Topps card, the 'finest known example' of its kind, sells for (08/29/22): The previous record for most expensive sports card was a T206 Honus Wagner card that sold for $7.25 million earlier in August

Yankees' Aaron Judge ties Mickey Mantle with third walk-off home run of season a (07/29/22): Judge is now up to 39 home runs on the year, the same amount he had all of last season

Rays rookie Wander Franco moves ahead of Mickey Mantle with on-base streak (09/2021): The 20-year-old has reached base in 37 consecutive games

Former Yankee sues HOF to get Mantle bat back (07/2021): The bat that Mickey Mantle used to hit his 500th career home run more than five decades ago is in the middle of a lawsuit this week between the Hall of Fame and former New York Yankees teammate Joe Pepitone.

Mickey Mantle baseball card sells for $5.2M, breaking all-time record for tradin (01/2021): The last time this kind of Mantle card was sold, it was for nearly half that price

Mickey Mantle's handwritten letter telling children 'don't do alcohol & drugs' h (06/2020): Mantle also wrote in the letter that he believed Willie Mays was a better baseball player than him, in part because the Giants legend took his health more seriously

Ken Morris: You’re likely to live longer than Mickey Mantle (02/2019): To break up the winter doldrums I’ve always enjoyed heading up to northern Michigan to tackle the ski slopes. I recently had the opportunity to ski with a longtime client.

Peter Ueberroth recalls reinstating Mickey Mantle and Willie Mays to baseball (03/2015): So, the sun rose in the East this morning, traffic was a bear on the 405 and, since there is a new commissioner in major league baseball, Pete Rose is trying again to get back in the club.

A $2.4-million sports memorabilia collection with Mickey Mantle Yankees rookie c (11/2014): Congratulations! Your weather is set to . You can change the location at any time. Don't have an account?

Gloucester County major leaguer who struck out Mickey Mantle and Roberto Clement (10/2014): Congratulations! Your weather is set to . You can change the location at any time. Don't have an account?

Kevin Haskin: 'Frog' could get Mickey Mantle to leap at pitches (08/2014): Kids want to be coached. At least they did in the 1940s, playing baseball in Baxter Springs. Within that hardscrabble town in the southeast corner of Kansas, six boys were shuffling around one day, probably getting a game up, or hitting fungos.

Foutch's Strike Zone surrenders another big inning, eliminated from Mickey Mantl (07/2014): Congratulations! Your weather is set to . You can change the location at any time. Don't have an account?

Mickey Mantle team takes nightcap from Crosby (06/2014): The Deer Park Gold Mickey Mantle team, attempting to make a quick recovery after a doubleheader disappointment at Pasadena Memorial, did so 24 hours later by going 1-0-1 in a twinbill against Crosby.

Almost 20 years after his death, Mickey Mantle slugs home run for Sandy victims (11/2013): An auction of one of the Hall of Famer's contracts brought in $40,000. Then the Mantle family decided to pay back New Jersey.

Collected Wisdom: Larry Mantle, retired high school coach and brother of Mickey (09/2013): Larry Mantle talked with The Oklahoman about his brother, his coaching career and more.

Hardball History: Earl Weaver, Mickey Mantle and Musical Depreciation Night (08/2013): This week’s walk down memory lane takes us past an epic night for Earl Weaver, the Mick’s funeral and some dude bringing a friggin’ piano to Ebbets Field, all in the name of union-busting. History is the best.

Mickey Mantle and Willie Mays: The best rivalry of baseball’s golden age (05/2013): Who was better: Mickey Mantle or Willie Mays? Fifty years after their rookie season, we're still debating it

1960 Mickey Mantle Contract To Be Auctioned Off To Help Sandy Victims (04/2013): Danny Mantle, the son of late Yankees legend Mickey Mantle, is putting his father’s 1960 contract on the auction block to benefit victims of Superstorm Sandy.

Mickey Mantle ’s $1,150 bonus check from Yankees up for auction (02/2013): This might be the coolest piece of auction memorabilia The Stew has ever publicized: The $1,150 check Mickey Mantle received from the New York Yankees to cover his signing bonus in 1949. If that price sounds a little low for … Continue reading →

Goodwin: Mickey Mantle was a long hitter on the links, too (12/2012): A group of guys were sitting around last summer talking about long hitters that we had seen. The names that came up most often were Boyd Downey, Anthony Fink, Kevin Roller and Carthage’s Greg Kyte, a multi-time national senior long-drive champion.

Mario Impemba: Quintin Berry not 'the next Mickey Mantle' but he's helped Detroi (05/2012): Impemba, on WBBL-FM, on if the Tigers are panicking: "As they say, when does it become 'it's not early anymore'? I think we're getting there."

It Started With Yankees Great Mickey Mantle: New World Record For Signed Basebal (10/2011): Assembling more than 4,000 autographed baseballs, it turns out, may not have been as tough a task for Dennis Schrader as proving the collection was a world record.

Leesburg man sells Mickey Mantle autograph (09/2011): Jack Brownlee just sold what could be hall of famer Mickey Mantle's first autograph as a professional baseball player. 'The Mick' was only 17.

Piece Of Mickey Mantle's History Moved From Picher (05/2011): A house being moved doesn't usually make the news.  But it does when that house is a piece of the past for one of Oklahoma's favorite sons.

Baseball's 'Last Boy', Mickey Mantle, offers a unique American story: Bill Livin (02/2011): On Mickey Mantle, the new biography about him, and how Baby Boomers even today see ourselves, darkly, in him.

Bulldozers about to level house in which Mickey Mantle was wed (01/2011): Vandals and thieves have had their way with the small white house at 462 S. Emily St. Windows have been knocked out. The front door is missing. Soon, bulldozers will level it and the rest of what is left of Picher in the wake of the government buyout of the former lead and zinc mining town.