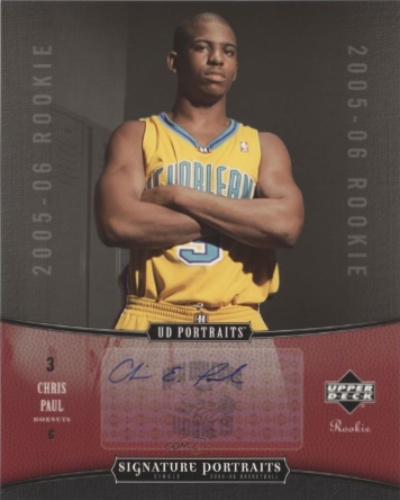 Christopher Emmanuel Paul (born May 6, 1985), nicknamed "CP3" and “The Point God”, is an American professional basketball player who plays for the Phoenix Suns of the National Basketball Association (NBA). Paul is widely regarded as one of the greatest point guards of all time. He has won the NBA Rookie of the Year Award, an NBA All-Star Game Most Valuable Player Award, two Olympic gold medals, and led the NBA in assists five times and steals a record six times. He has also been selected to twelve NBA All-Star teams, eleven All-NBA teams, and nine NBA All-Defensive teams. In 2021, he was selected to the NBA 75th Anniversary Team. He also served as the president of the National Basketball Players Association from August 2013 to August 2021. Among the highest-paid athletes in the world, he holds endorsement deals with companies such as Jordan Brand and State Farm. More about Chris Paul

Current items with a signature of Chris Paul

These are the most current items with a signature of Chris Paul that were listed on eBay and on other online stores - click here for more items.

Traded items with a signature of Chris Paul

If you're interested in Chris Paul Rookie cards you might want to take a look at our sister site that specializes in Basketball Rookie Cards only.

Most recently, these items with a signature of Chris Paul were sold on eBay - click here for more items.

Suns lose Paul to heel soreness against Sixers (11/08/22): Chris Paul was ruled out for the second half of the Suns' game Monday night in Philadelphia with right heel soreness.

Suns’ Chris Paul releases statement on Sarver, ‘the sanctions fell short’ (09/2022): Chris Paul knew the questions were coming: Suns media day is Sept. 26 and he was going to be asked multiple times about the actions and ensuing one-year suspension of team owner Robert Sarver for racist and misogynistic behavior, as well as creating a hostile work environment. So Paul got out in fro

Suns stinker in Game 7 overshadows excellent regular season (05/2022): PHOENIX (AP) Chris Paul worked his way around the perimeter and got the shot he wanted on the first offensive possession for the Phoenix Suns - an open 14-foot jumper near the free-throw line that he's made plenty of times during his 17-year NBA career. The unwelcome surprises were just beginning

Suns' Chris Paul set curfew for teammates during playoff series against Pelicans (04/2022): Phoenix prevailed 4-2 against New Orleans to set up a second-round matchup with the Mavericks, so perhaps Paul's tactics worked

Chris Paul injury update: Suns star to return from fractured thumb Thursday vs. (03/2022): Phoenix has continued to thrive in his absence

Suns looking to find footing without Chris Paul, host Jazz (02/2022): Adjusting to life without Chris Paul is still a work in progress for the Phoenix Suns. The Suns enter Sunday's home contest against the Utah Jazz trying to avoid their first two-game losing streak since late December. On Friday, Phoenix dropped its second game without Paul in the lineup, falling t

NBA Power Rankings: Chris Paul, and the red-hot Phoenix Suns (01/2022): Rookie Wire took a look at the NBA through games played on Sunday and ranked each team from worst to first.

Chris Paul says re-signing with Suns was an 'easy decision' (09/2021): Paul will be re-joining the defending Western Conference champions this season

Suns' Chris Paul surprises grandparents on CBS' 'Secret Celebrity Renovation' (07/2021): Paul was involved in the home makeover for his grandparents, who have lived in the same house for 50 years

Suns vs. Lakers: Chris Paul leaves Game 1 with right shoulder contusion, returns (05/2021): The Suns led the Lakers by nine when Paul went down.

NBA All-Star Game: Chris Paul edges teammate Devin Booker, continues to be among (02/2021): Every team Paul has played for has gotten significantly better the second he showed up

Frustrated CP3: Suns 'not playing well enough' (01/2021): Phoenix Suns star Chris Paul said the team is playing only "in spurts" after Wednesday's loss to the Thunder dropped them to 8-8 on the season.

WATCH: Chris Paul reminds 11-year-old son who the better basketball player is wi (12/2020): "This young man here thinks he can make more free-throws in a row than me."

76ers offseason preview: A Chris Paul reunion with Daryl Morey and Doc Rivers is (10/2020): Philadelphia should do everything in its power to give Doc Rivers his old point guard back

Chris Paul trade rumors: Bucks expected to pursue deal for Thunder star; 76ers d (09/2020): Paul could be a hot commodity if he is made available by the Thunder over the offseason

The Thunder built a Game 4 comeback out of all those Rockets bricks (08/2020): Houston came out of halftime looking unstoppable from 3-point range. But when the shots stopped falling, Chris Paul and OKC stole Game 4 and the series momentum.

Thunder roster, schedule for NBA restart: Three things to know as Oklahoma City (07/2020): Led by a resurgent Chris Paul, one of the league's biggest surprises looks to regain momentum in the NBA restart

President Chris Paul -- the point guard at a time of crisis (05/2020): The 10-time All-Star is the president of the Players' Association, putting him in a key leadership role as the NBA mulls options to return.

Chris Paul says NBA players would need several weeks before a potential return t (04/2020): Paul pointed to the fact that some players have access to full gyms while others don't even have a hoop

Witness in murder of CP3's grandfather recants (03/2020): A key witness who implicated five teens in the 2002 killing of NBA star Chris Paul's grandfather has recanted her testimony.

Bulls' White has career night vs. AAU mentor CP3 (02/2020): Playing against his former AAU coach Chris Paul, Bulls rookie Coby White scored a career-high 35 points Tuesday night in a close loss to the Thunder. "I watch him play just about every time we don't play, so I'm happy to see him doing well," said Paul.

Chris Paul says 'no chance' he will waive $44M player option, even if it means g (01/2020): It doesn't sound like Paul is all that interested in getting traded in the first place

Rumor: Chris Paul would like to play for Milwaukee Bucks (10/2019): There's also almost no chance this happens.

Chris Paul was dishing, DeAndre Jordan and Blake Griffin were dunking (04/2015): The Clippers used all these dunks to pick up a key 94-86 win over Memphis.

Lakers FYI: What might have been with Chris Paul? (10/2014): It's always a problem for the Lakers, this whole Chris Paul thing.

Dempsey: Great debate: Chris Paul's status (05/2014): Chris Paul's exit from the playoffs last week got me thinking. What does it mean to be a "great" player anymore?

Chris Paul: 'My teammates and I' support Donald Sterling's NBA ban (04/2014): Clippers players didn't talk to reporters before the start of Game 5 of the Western Conference quarterfinals against the Golden State Warriors, but point guard Chris Paul released a statement regarding the NBA's decision to ban owner Donald Sterling from the league.

Clippers' Doc Rivers and Chris Paul are on the same page (02/2014): Coach and his All-Star point guard keep the offense flowing. They share a common bond because of the point guard position. That has helped strengthen the relationship between Clippers All-Star Chris Paul and Coach Doc Rivers .

Jordan Brand Launches Chris Paul's Latest Signature Shoe, the 'CP3.VII' (09/2013): The Jordan Brand officially announced Chris Paul 's latest signature shoe, the "CP3.VII," on Wednesday. According to Nike, the shoe draws inspiration from East LA and the 80s era that Paul grew up in. They will be available nationwide on October 5.  Thanks to Nike for the photos.

NBA free agency rumors roundup: Dwight Howard and Houston, Chris Paul staying in (06/2013): The Clippers made a huge splash when they finally landed Doc Rivers to replace Vinny Del Negro and their patience in seeing through a deal that was reportedly dead multiple times may have already paid off.

Aside from Chris Paul, it's the same old Clippers (04/2013): The point guard finished with 35 points and six rebounds. It's too bad his sense of responsibility wasn't contagious.

Three-Pointers: Clippers’ Chris Paul closes out Pacers (02/2013): The Clippers defeated the Pacers 99-91 at Bankers Life Fieldhouse on Thursday, improving to 42-18 on the season. The Pacers dropped to 36-22 with the loss.

Clippers top power rankings; Chris Paul, too? (12/2012): The time of reckoning is upon us. A new year is nigh, and the best team in the NBA is the Los Angeles Clippers. No, we don't know how this happened. But everyone agrees.

Clippers 101, Timberwolves 95: Chris Paul leads L.A. (11/2012): LOS ANGELES -- Chris Paul had 23 points and 11 assists, and the Los Angeles Clippers welcomed Chauncey Billups back to the lineup for the first time this season with a 101-95 victory over the Timberwolves on Wednesday night, Nov. 28.

NBA: Chris Paul likes what he sees on Clippers (09/2012): Chris Paul's disappointment at sitting out of the Clippers' first scrimmage was tempered by what he observed Saturday. For perhaps another two weeks, the All-Star point guard is a fan.

Clippers’ Chris Paul Has Thumb Surgery (08/2012): Los Angeles Clippers point guard Chris Paul had surgery to repair a torn ligament in his right thumb, an injury that occurred last month in training for the London Olympics.

Chris Paul says he still has a connection with New Orleans: NBA links (07/2012): News from around the NBA

Chris Paul's Son Doing The 'The Blake Face' Is The Cutest Thing You'll See All D (05/2012): The Los Angeles Clippers took a 2-1 lead over the Memphis Grizzlies last night with an 87-86 win. But the most memorable moment from the evening came during the post-game press conference.

Chris PaulPractices And Will Start Game 1 Against Memphis (04/2012): The Memphis Grizzlies have been unbeatable at home lately and are preparing to open the postseason on their own court for the first time in team history when they host the Los Angeles Clippers.

Chris Paul confirms he will stay with Clippers next season (02/2012): When Chris Paul was traded to the Clippers, it was with the understanding that he would give them a couple years — this season, and he would opt-in for next season. Opt in for a cool $17.8 million. But there was a concern he would opt-out after this season, either to go play with someone…

Chris Paul to Pau Gasol: I’m Not One of Your Kids (01/2012): Though it was certainly an entertaining, seesaw affair that more than lived up to the hype , one could argue that the best moments from last night’s Clippers/Lakers showodown had little to do with actual basketball.

Could Chris Paul become a Knick? (11/2011): Chris Paul was in Brooklyn on Tuesday, handing out boxes of food to families on behalf of the Carmelo Anthony Foundation.

Tickets To See Lebron, Chris Paul Skyrocket Online (09/2011): Basketball fans interested in attending Saturday's CP3 All Star game at Winston-Salem State University will have to fork over some big bucks.

When The Checks Stop Coming In: Carmelo Anthony And Chris Paul Consider Taking T (07/2011): The NBA better get their isht together if they don’t want to lose their top ballers… Carmelo Anthony said he will consider offers to play professional basketball in China if there is no resolution to the NBA lockout. The Knicks

New Orleans Hornets' Chris Paul works on enjoying his offseason (05/2011): He said he isn't worried about the lockout

The New Orleans Hornets would lose a lot more if they lost Chris Paul (02/2011): When Cleveland lost LeBron James, the franchise lost 26 percent of its value

New Orleans Hornets Coach Monty Williams says they need other players to step up (12/2010): Starting forward Trevor Ariza goes 1-of-13 from the field for four points against the Indiana Pacers.