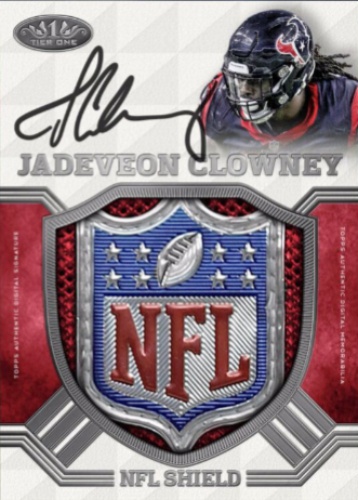 Jadeveon Davarus Clowney (/dʒəˈdɛviɒn/ jə-DEV-ee-on; born February 14, 1993) is an American football defensive end for the Cleveland Browns of the National Football League (NFL). He played college football at South Carolina, where he twice earned first-team All-American honors, and was selected first overall by the Houston Texans in the 2014 NFL Draft. Clowney was a member of the Texans for five seasons, earning three consecutive Pro Bowl selections during his final years with the team. Following his departure from Houston, he played with the Seattle Seahawks and Tennessee Titans before choosing to join the Browns in the 2021 offseason. More about Jadeveon Clowney

Current items with a signature of Jadeveon Clowney

These are the most current items with a signature of Jadeveon Clowney that were listed on eBay and on other online stores - click here for more items.

Traded items with a signature of Jadeveon Clowney

If you're interested in Jadeveon Clowney Rookie cards you might want to take a look at our sister site that specializes in Football Rookie Cards only.

The most expensive item with a signature of Jadeveon Clowney (JADEVEON CLOWNEY SIGNED GAMECOCKS AUTHENTIC F/S SPEED HELMET JSA FULL LETTER) was sold in November 2013 for $750.00 while the cheapest item (2014 Topps Prime Football #140 JADEVEON CLOWNEY * ROOKIE * AUTOGRAPH) found a new owner for $0.99 in October 2022. The month with the most items sold (57) was May 2014 with an average selling price of $99.00 for an autographed item of Jadeveon Clowney. Sold items reached their highest average selling price in October 2011 with $197.50 and the month that saw the lowest prices with $5.50 was October 2022. In average, an autographed item from Jadeveon Clowney is worth $48.39.

Most recently, these items with a signature of Jadeveon Clowney were sold on eBay - click here for more items.

Browns' Jadeveon Clowney out vs. Steelers after reportedly being sent home for c (01/07/23): Clowney said Thursday he was "95 percent sure" he wouldn't be back with the Browns

Browns' Garrett disappointed by Clowney's barbs (01/2023): Browns defensive end Myles Garrett said he was disappointed by comments made by frustrated teammate Jadeveon Clowney that accused the team of showing favoritism to Garrett.

Browns Injury Report: Jadeveon Clowney back, Jedrick Wills misses practice with (12/2022): The Browns saw one player return while a new starter missed practice with an injury.

Denzel Ward out for Browns, Jadeveon Clowney questionable (10/2022): The Browns will not have cornerback Denzel Ward against the Ravens on Sunday, but defensive end Jadeveon Clowney could be back in the lineup. Ward has been ruled out for this weekend because of a concussion. It will be the second straight game that Ward misses because of the injury. Clowney has miss

Texans draft picks 2022: Full list of Houston’s draft picks, order for every rou (04/2022): The Houston Texans have 11 picks in the 2022 NFL Draft, including two in the first round (No. 3 and No. 13). It marks just the second time in franchise history that the team has two first-round picks, while the No. 3 overall pick is the team’s highest pick since selecting Jadeveon Clowney first over

Browns put Jadeveon Clowney on COVID-19 reserve list (12/2021): A report on Friday said that Browns defensive end Jadeveon Clowney tested positive for COVID-19, but the team didn’t put him on the COVID reserve list on Friday or Saturday. The move finally came on Sunday. The Browns announced that Clowney went on the list at the same time that they confirmed right

Lions lineman makes comment about Jadeveon Clowney's mother and it proves costly (11/2021): Sometimes it seems like only the Lions can lose this way

So far, so good: A healthy Jadeveon Clowney is key to Browns' defensive success (06/2021): Jadeveon Clowney signed a one-year deal this offseason with the Browns, and he looked to be at full speed in camp despite recovering from knee surgery.

Garrett: Browns' defense 'scary' with Clowney (04/2021): Myles Garrett said Thursday the Browns' defense will be "very scary" with he and Jadeveon Clowney both rushing the quarterback this season.

NFL free agency 2021: Browns courting Jadeveon Clowney once again, meet with pas (03/2021): Cleveland is getting an up-close look at the former No. 1 overall pick

Source: Clowney's season over following surgery (12/2020): Jadeveon Clowney's season is over after the Titans linebacker underwent knee surgery earlier this week. Clowney, who signed a one-year deal with Tennessee this past offseason, was already on injured reserve.

Ravens miss out on heavy pursuit of Yannick Ngakoue and Jadeveon Clowney, but a (09/2020): The Ravens were ready to deal a second-round pick to the Jaguars for Ngakoue but couldn't make his salary work

Jadeveon Clowney tells Jets to 'come get him' in video chat with newly-acquired (07/2020): McDougald just arrived in New York as part of the Jamal Adams trade

Jadeveon Clowney 'still open' to all offers, plans on signing before the start o (06/2020): Nothing has changed regarding the NFL's top free agent

Is Jadeveon Clowney done in Seattle? Seahawks' Jarran Reed announces he is takin (04/2020): Does this mean Clowney is officially leaving Seattle?

Seahawks making effort to boost pass-rush, with or without Jadeveon Clowney (03/2020): The Seahawks have taken steps in the early free-agency period to add bite to their pass rush.

Jadeveon Clowney says he wants to join a contender in free agency, doesn't dismi (01/2020): Clowney has his list of teams he wants to play for and they all have a shot at the Super Bowl

A status report on Jadeveon Clowney, other Seahawks injury updates (11/2019): Seattle has a few notable injuries on the defensive line that will need to be watched throughout the week.

Texans' Watt, Clowney, Hopkins, McKinney named to Pro Bowl (12/2018): This will be the fifth Pro Bowl for Watt and third for Hopkins and Clowney. McKinney recognized for first time

‘Serious concern’ over Jadeveon Clowney’s knee (02/2015): © Christian Petersen/Getty Images The latest news regarding Jadeveon Clowney's injury woes places great doubt on the likelihood that the Texans linebacker will be ready next season.

Are NFL players like Jadeveon Clowney vulnerable to injury? (12/2014): The Houston Texans invested the No. 1 overall pick of the 2014 NFL draft on linebacker Jadeveon Clowney, but the team didn't get a first-round type performance out of the former South Carolina standout.

Will Houston Texans linebacker Jadeveon Clowney play Sunday vs. Eagles? (10/2014): News of Clowney potentially being out this weekend has to be music to the ears of Eagles' coaches, who were going to have their hands full trying to guard both Clowney and defensive end J.J. Watt.

Jadeveon Clowney's Injury Should Have The Texans Thinking About Tanking (09/2014): The Texans suffered an early blow to their...

With Jadeveon Clowney gone, Gamecocks look to Skai Moore (08/2014): COLUMBIA - His mother wanted to give him a first name that conveyed unlimited potential. So she looked to the heavens. "My mom, she told me when she would look into the sky, she would think about infinity," said South Carolina linebacker Skai Moore. "Just linking me with infinite possibilities."

Jadeveon Clowney Played Through Injury at USC (06/2014): When the 2014 NFL Draft rolled around on May 8, there was no doubt as to who would be the number one pick. During his three years at the University of South Carolina, Jadeveon Clowney performed athletic feats that many …

Jadeveon Clowney on 2014 NFL draft stock: 'Just stop telling me about it' (03/2014): South Carolina star defensive end Jadeveon Clowney is one of the top prospects in the 2014 NFL draft, which means he will constantly hear analysts discussing where he will be selected when the draft officially kicks off.

Jadeveon Clowney 2014 NFL Draft scouting report (01/2014): Is Clowney perfect? No, but he doesn't have to be to become a dominant NFL player. Players with his skill set don't come around often, and that's worth appreciating.

Jadeveon Clowney was speeding because he was running late (12/2013): Video from a traffic stop shows South Carolina star defensive end Jadeveon Clowney telling an officer he had just three minutes to make it to the stadium when he was stopped for doing almost 30 mph over the speed limit.

Jadeveon Clowney still dealing with rib and foot injuries (10/2013): Star South Carolina defensive lineman Jadeveon Clowney is still being affected by injuries that have plagued him all year long. Bruised ribs caused him to miss the Gamecocks' contest against Kentucky, and they are still reportedly bothering him .

Surgeon doubts Jadeveon Clowney will be ready for combine (09/2013): According to an orthopaedic surgeon, Jadeveon Clowney's postseason surgery makes his chances of participating fully in the NFL Scouting Combine slim.

Jadeveon Clowney is the hit of college football (08/2013): COLUMBIA, S.C. — When it was time to go, Jadeveon Clowney left Williams-Brice Stadium like he often does. He climbed onto a steel rail at the top of the stairs, smiled and slid — no hands, no worries.

Mike Leach praises Jadeveon Clowney hit at Pac-12 media days (07/2013): RT @ coachingsearch : David Shaw: "It's our job to teach these guys how to make a living, not make it so they make a living in college." 1 hour ago Love it.

Devin Gardner recalls Jadeveon Clowney's brutal hit on Vincent Smith in the Outb (06/2013): Gardner gives Smith props for his toughness, and says the highlight-reel play will serve as a reminder for Michigan on how not to finish a football game.

South Carolina still celebrating Jadeveon Clowney 's hit vs. Michigan (03/2013): It's the play that won't go away. Vincent Smith surely is getting sick of it. He's like the new Vinko Bogataj, the Slovenian ski jumper who took the "Agony of Defeat" tumble week after week, year after year on ABC's "Wide World of Sports."

Bob Frantz: Jadeveon Clowney owes it to South Carolina to play his junior year (02/2013): Those mean old men of the NFL and the NCAA. How dare they use and abuse poor Jadeveon Clowney like this?