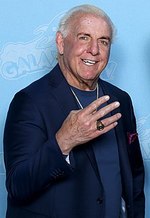 Current items with a signature of Ric Flair

These are the most current items with a signature of Ric Flair that were listed on eBay and on other online stores - click here for more items.

Traded items with a signature of Ric Flair

The most expensive item with a signature of Ric Flair (Ring Worn Signed Ric Flair Pro Wrestling Boot St Louis Ledger Starrcade 1983 NWA) was sold in May 2019 for $7500.00 while the cheapest item (Topps WWE SLAM Digital 2018 Silver Signature Series Ric Flair 758CC) found a new owner for $0.86 in May 2020. The month with the most items sold (55) was January 2022 with an average selling price of $46.00 for an autographed item of Ric Flair. Sold items reached their highest average selling price in October 2017 with $435.00 and the month that saw the lowest prices with $0.99 was August 2010. In average, an autographed item from Ric Flair is worth $61.00.

Most recently, these items with a signature of Ric Flair were sold on eBay - click here for more items.

Ric Flair talks daughter Charlotte being best of all time ahead of 'Legends Nigh (01/04/21): Flair is still laughing off criticism of his daughter while willing to argue her greatness with anyone

Bubba Ray Dudley Knows Exactly How John Cena Should Break Ric Flair's Record (01/04/19): It may look like John Cena is transitioning out of WWE, but there's still one thing he has to do [...]

Ric Flair Pays Tribute to ‘Mean’ Gene Okerlund (01/03/19): The voice of a generation’s childhood drifted away on Wednesday with the sudden death of beloved announcer Gene Okerlund.

Ric Flair, Triple H, Stephanie McMahon & Other Wrestling Stars Remember WWE Hall (01/02/19): As noted, WWE Hall of Famer “Mean” Gene Oklerlund passed away at the age of 76 today. Below are Twitter reactions from around the wrestling world, including comments from WWE Hall of Famer Ric Flair, Triple H, Stephanie McMahon, Seth Rollins and others. Triple H wrote, “A voice and sound track to an

Bubba Ray Dudley Knows Exactly How John Cena Should Break Ric Flair's Record (01/2019): It may look like John Cena is transitioning out of WWE, but there's still one thing he has to do [...]

Ric Flair Claims He's Cleared to Take Bumps Again (12/2018): Ric Flair has an interesting history when it comes to retiring from wrestling.His last match was [...]

UFC 187 Bold Predictions: Who Picks Up the Pieces After Jon Jones' Suspension? (05/2015): I love the dimples that pop up when he smiles, and he truly seems like a good person. But it's not the true championship. Ric Flair taught us that "to be the man, you have to beat the man." And, brother—Jon Jones is still the man until someone beats him ...

Ric Flair Dubbed Over in Spanish Is Exquisite (03/2015): This is the best thing you will watch today.

Ric Flair News & Notes, Booker T News, Is WrestleMania AXXESS Sold Out Yet?, & M (01/2015): Like this post? Share it! -- Ric Flair was interviewed a few days ago for ESPN’s 30 for 30, which looks at Christian Laettner of Duke University. It will air in the spring.

Ric Flair On Tonight's WWE NXT Broadcast, Recent WWE Attendance Figures, Itami/W (12/2014): Like this post? Share it! Want to write for eWrestlingNews.com? Connect now and find out how to contribute.

Backstage Update On WWE Hall Of Famer Ric Flair - Major Concern Over His Health (11/2014): As previously reported, Ric Flair ’s recent health issues and condition were a topic of discussion backstage within both WWE and TNA. As you know, Flair underwent surgery a couple of weeks ago that caused him to be pulled from an appearance on the NXT Takeover: Fatal Four-Way show.

WWE's Scariest Talents, Ric Flair Lands A New Movie Gig, WWE's Q3 Earnings Repor (10/2014): Like this post? Share it! -- WWE has a new feature with horror movie-style posters of the “scariest and creepiest” WWE talents. You can find the gallery here .

Ric Flair Hospitalized in Georgia (09/2014): Wrestling legend Ric Flair has reportedly been hospitalized for over a week. At the age of 65, hospitalization is not something to be taken lightly. As we recently reported here, Duck Dynasty star Phil Robertson was also hospitalized this week, …

WWE: Ric Flair And Daughter Charlotte Could Take On Divas AJ Lee And Paige? [Vid (08/2014): The WWE has been looking for a way to have Ric Flair be regularly involved in an on-screen role but so creative has not figured out a decent way to get the WWE Hall Of Fame wrestler near the ring. Currently, the WWE management has limited their use of Flair to panels and backstage segments

Today In Pro Wrestling History Ric Flair Is Coming, Nitro '96, ROH '06 & Much Mo (07/2014): Want to write for eWrestlingNews.com? Connect now and find out how to contribute.

“Papelbon, of course, is Ric Flair” (06/2014): What, you thought Jeff Manship would be the stylin', profilin', limousine riding, jet flying, kiss-stealing, wheelin' n' dealin' son of a gun?

Ric Flair Addresses Evolution and The Shield (04/2014): Wrestling legend Ric Flair returned on Monday Night Raw on April 28 to praise members of The Shield. Aaron Oster of The Baltimore Sun writes Flair did so despite his past ties with Evolution:...

Check Out These Incredible Paintings of Randy Savage, Ric Flair, Jake the Snake, (03/2014): So good.

Sting Replaces Ric Flair at Indy Events (02/2014): Ric Flair committed to appear at Revolution Pro wrestling events on March 14th and March 15th back in November of last year. Since that time, Flair signed a new WWE contract, which allows the company to override any outside project that Flair has and will commit to.

Ric Flair Replaces CM Punk at Upcoming WrestleMania Axxess Event (01/2014): CM Punk has been removed from the WrestleMania Axxess lineup. Fans who had purchased tickets for his April 5th VIP Autograph session were emailed and notified that Ric Flair would be replacing Punk at the event.

Chris Long is Ric Flair (10/2013): Not sure Ric Flair would sign off on this as an official imitation of the strut, but it's a noble effort from Chris Long. The Rams defensive linemen are getting plenty of opportunities to practice their sack dances in this one, with six.

What's causin' all this? Ric Flair was just being Ric Flair (08/2013): Ric Flair has a knack for making people talk wherever he goes.

Ric Flair Appears at Indy Show (05/2013): Ric Flair, along with the Rock and Roll Express, appeared at an independent wrestling show in Georgia on Thursday night. Flair appeared in front of the crowd, but did not get in the ring or do any interviews.

ESPN Analyst Recalls Meeting “The Nature Boy” Ric Flair (04/2013): In a recent interview, ESPN analyst Stuart Scott told Soultrain.com that Ric Flair was “in the category of people I’ve met that “I was awestruck by.”

Ric Flair : "I loved my son very much" (03/2013): Police in Charlotte say the son of one of wrestling's biggest names was found dead in a SouthPark hotel room early Friday morning.

WWE NXT Live Event Report w/ Ric Flair from Melbourne, Florida 2/24/13 (02/2013): Thanks to Spyke from the NXT Street Team for emailing this report! WWE NXT was live in Melbourne, FL tonight. A capacity crowd showed up at the Melbourne Auditorium. WWE Hall of Famer "Nature Boy" Ric Flair and his daughter, WWE NXT Diva Charlotte, signed autographs for everyone in attendance.

Ric Flair and The Miz (01/2013): I seen the comments on the news on flair and miz and i dont underdtand the hate. I like the miz as a face better then a heel he was boring as a heel to me and as a face he is really funny. He hasnt done anything in the ring really but his Mic work is good not great tho. Now onto the topic at hand.

WWE Steering Clear Of All Recent TNA Talent Including Ric Flair (09/2012): Don’t expect the likes of Alex Shelley, Velvet Sky, Devon, Angelina Love or even Hall of Famer Ric Flair to pop up in a WWE ring anytime soon.

Lex Luger Interview - Not Winning The WWF Championship, Partying With Ric Flair (08/2012): ‘The Total Package’ Lex luger joined Inside The Ropes radio on Thursday night. Highlights are as follows: Partying with Ric Flair: "Limosuine riding jet flying, that was the lifestyle. Ric would stay up so late, riding around the town.

Ric Flair Will Introduce Insane Clown Posse at the Gathering Of the Juggalos (07/2012): Ric Flair really likes money, really needs money, or a combination of both.

Report: Wrestler Ric Flair assaulted by wife, again (06/2012): Police in Charlotte say they had to go out to the home of professional wrestler Ric Flair after they received a call for an assault, the second in two years. Flair, whose legal name is Richard Morgan

Total Nonstop Action Wrestling claims WWE tried to poach Ric Flair, other wrestl (05/2012): NASHVILLE, Tenn. - Two giants in the wrestling world are getting ready to rumble — in a courtroom.

Paul Orndorff Slams Bret Hart, Ric Flair and Ultimate Warrior In Interview (04/2012): Facing Ric Flair in 1982 for NWA World Championship: “He was just another body. Some are better than others. I believed in making it look real. I was probably hard to work with because I wanted it to make real and I knew how to wrestle.”

Jake Roberts Questions Second Ric Flair HOF Induction; Wrestling The Undertaker (03/2012): His favorite WrestleMania moment: "God that is so tough, I had so many of them, I had so much fun at them, WrestleMania 3 was out of this world, the amount of people that were there, Alex Cooper and Honky Tonk Man doing that stuff it was unbelievable and that is still the record.

WWE Hall of Famer claims bragging rights over Ric Flair (02/2012): On the Road to WrestleMania 28 Miami with Sgt. Slaughter

Shane Douglas Says Ric Flair Exposed Himself To Children, Criticizes Dixie Carte (11/2011): Douglas on TNA Hardcore Justice: "They invited me, and offered such a ridiculously low sum of money, that I said "shove it up your backside."

Health Update on Ric Flair - May Not Undergo Triceps Surgery (10/2011): Ric Flair, 62, who was told two weeks ago that he would have to undergo surgery due to a torn triceps suffered during a match with Sting last month on Impact Wrestling, may not have to have surgery at all.

Wrestler Ric Flair Looking at Legal Options Over Alcoholic Cardiomyopathy Story (08/2011): Wrestling icon Ric Flair is FURIOUS over an article which claims the Nature Boy is suffering from a serious medical condition caused by years of hardcore boozing

Ric Flair Desperate for Money? (07/2011): Just reading the about Ric Flair selling some of his wrestling stuff, it's really really sad to see someone have to sell the most prestigious title on all of wrestling for a few quick bucks. Plus a tank top for $25. I really think he has officially hit rock bottom. Here's the link to the site.

Jim Ross Blog: Booker T's Announcing, Ric Flair's Injury and more (02/2011): The Super Bowl: "Football wise we sat just off the GB end zone in the lower level, corner and our seats were excellent. The world's largest video board makes every seat worthwhile I assure you. We were about 14 rows off the field near the Steelers entrance to the stadium.

Breaking News - Ric Flair Leaves TNA's UK Tour (01/2011): One anonymous source said Flair "threw a fit" and "He was playing 'Nature Boy' on the tour and got pissed off and threw a tantrum. As far as we all know, he's in Dublin still. He said he wasn't coming and he wasn't in Berlin."