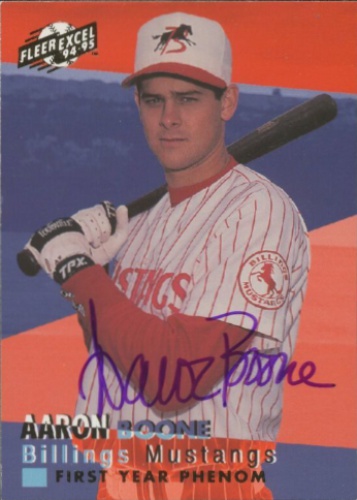 Aaron John Boone (born March 9, 1973) is an American baseball manager and former infielder who is the manager of the New York Yankees in Major League Baseball (MLB). He previously played in MLB for 13 seasons from 1997 through 2009. As a player, Boone is most recognized for his 2003 campaign with the Yankees, during which he was an All-Star and hit the winning walk-off home run of the 2003 American League Championship Series. More about Aaron Boone

Current items with a signature of Aaron Boone

These are the most current items with a signature of Aaron Boone that were listed on eBay and on other online stores - click here for more items.

Traded items with a signature of Aaron Boone

The most expensive item with a signature of Aaron Boone (Aaron Boone New York Yankees Signed Cooperstown 2003 ALCS Bat Steiner) was sold in June 2022 for $229.00 while the cheapest item (Aaron Boone Autographed RawlingOfficial League Ball.) found a new owner for $0.01 in July 2011. The month with the most items sold (17) was December 2017 with an average selling price of $55.00 for an autographed item of Aaron Boone. Sold items reached their highest average selling price in May 2017 with $114.99 and the month that saw the lowest prices with $0.50 was January 2020. In average, an autographed item from Aaron Boone is worth $10.51.

Most recently, these items with a signature of Aaron Boone were sold on eBay - click here for more items.

Boone: Could use Montas as opener in playoffs (09/25/22): With Frankie Montas going on the injured list Tuesday, Yankees manager Aaron Boone said it would be tough for the right-hander to be part of the team's playoff rotation given the timing, but using him as an opener or in a relief role is an option.

Cole tossed, then Boone, but Yanks hold off Sox (09/24/22): Yankees starter Gerrit Cole and manager Aaron Boone were both ejected from Friday night's game against the Red Sox for arguing with plate umpire Brian Knight about a called ball that preceded a game-tying home run in the sixth inning.

Yankees' Aaron Boone bemoans 'embarrassing' loss vs. Rays as New York's free fal (09/03/22): The Yankees were shut out for the sixth time since the beginning of August on Friday

'Embarrassing': Boone angry after Yanks' 9-0 loss (09/03/22): The Yankees' 9-0 defeat to the Rays on Friday was their biggest blowout loss this season. "That's an embarrassing loss," manager Aaron Boone said.

Yanks' LeMahieu day-to-day with toe inflammation (08/16/22): Yankees manager Aaron Boone said DJ LeMahieu will receive treatment on the injury, which has affected him while swinging when he rotates on his back (right) foot.

Yankees bust out of slump after team meeting (08/2022): A season-high five-game losing streak prompted Yankees manager Aaron Boone to assemble his players in the visiting clubhouse at Seattle's T-Mobile Park for a team meeting.

Aaron Boone expects Yankees to be at full strength in Toronto this season despit (04/2022): Some Yankees players reportedly got vaccinated recently

Yankees catcher Ben Rortvedt suffers oblique injury, creating 'concern' for Open (03/2022): New York Yankees' Ben Rortvedt has an oblique injury and there is "concern" as to whether or not the catcher will be ready in time for Opening Day, Aaron Boone said Saturday.

Boone says Yankees 'a lot better' with Gallo (07/2021): The Yankees completed their trade for All-Star Joey Gallo on Thursday, and manager Aaron Boone told reporters that he has already welcomed Joey Gallo to the team.

Yankees' Aaron Judge expected to be in Opening Day lineup after missing final sp (03/2021): Aaron Boone said Judge was feeling 'a little under the weather' on Monday

Boone talks with RHP German about deleted post (02/2021): On Domingo German's first day back with the Yankees following a domestic violence suspension, he had a conversation with manager Aaron Boone over his deleted Instagram post.

Boone's goal to keep LeMahieu 'for a long time' (12/2020): Yankees manager Aaron Boone said "it's no secret" that his No. 1 priority is to keep free agent DJ LeMahieu in the fold "for a long time," and that he'll probably reach out to the infielder in the near future.

Yankees' Aaron Boone says criticism of catcher Gary Sanchez has been 'over the t (11/2020): Sanchez is set to enter a pivotal season after a brutal 2020

Yankees manager Aaron Boone will return in 2021 despite ALDS exit, Hal Steinbren (10/2020): The Yankees are coming off another disappointing playoff exit

Yankees' Aroldis Chapman tests positive for COVID-19, won't be with club for 'fo (07/2020): Chapman is dealing with mild symptoms, according to manager Aaron Boone

Judge in 'holding pattern' amid tests on shoulder (02/2020): An MRI on Yankees star Aaron Judge's ailing right shoulder came back negative, and he is scheduled for another test Monday. "We're in a holding pattern with it, just trying to figure out what exactly is going on," manager Aaron Boone said Saturday.

Lessons from Nick Saban, Aaron Boone and others: How David Ross is preparing to (01/2020): Before managing his first game, Chicago's new skipper is soaking in advice from across baseball and beyond.

For Brian Cashman, Yankees’ Sad Ending Won’t Mean a Roster Reboot (10/2019): “We failed in our final game, but it wasn’t a failed season,” the general manager said in a wrap-up news conference for the 2019 season. Manager Aaron Boone was less sanguine about the A.L.C.S. loss.

Aaron Boone Goes Knuckle-Deep On ESPN Megacast (01/2015): Aaron Boone is one of a number of ESPN personalities featured on tonight's Megacast "ESPN Voices" broadcast on ESPNU, which has mostly consisted of allowing viewers to watch talent eat food. Or in Aaron Boone's case, watch him pick his nose. Read more...

NHL takeaways: Move over, Aaron Boone — Boston has a new villain (05/2014): Bruins have done everything they can to stop P.K. Subban (their fans have done even worse). But the Canadiens’ defenseman just keeps coming, and could just take down the B's.

Former MLB Player and ESPN Analyst, Aaron Boone Talks Heart Awareness, Baseball, (02/2014): I had the great fortune to speak with former Major League Baseball player, Aaron Boone about CHD. He found out back in his college days that he had a heart defect. Even with that news he didn’t let that slow him down. Contributor: Art Eddy, III Published: Feb 18, 2014

Aaron Boone picks Reds to reach World Series (02/2013): Former Red Aaron Boone says the Reds are his pick to get to the World Series in the National League this year. John Fay interviewed Boone on Thursday in Goodyear.

Utah Blaze: Aaron Boone gets AFL award (04/2011): Aaron Boone earned the Highlight of the Week from the Arena Football League.