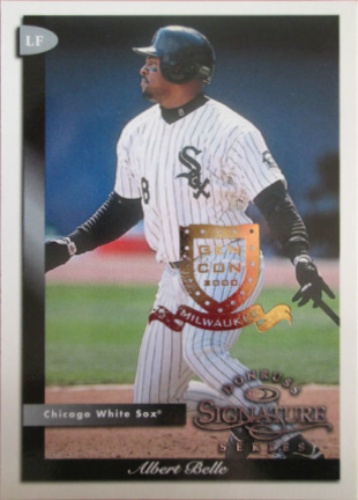 Albert Jojuan Belle (born August 25, 1966), known until 1990 as Joey Belle, is an American former Major League Baseball outfielder who played from 1989 to 2000, most notably for the Cleveland Indians. Known for his fierce, competitive temperament and intimidating stature, Belle was one of the leading sluggers of his time, and in 1995 became the only player to ever hit 50 doubles and 50 home runs in a season. He was also the first player to break the $10 million per year compensation contract in Major League Baseball. More about Albert Belle

Current items with a signature of Albert Belle

These are the most current items with a signature of Albert Belle that were listed on eBay and on other online stores - click here for more items.

Traded items with a signature of Albert Belle

If you're interested in Albert Belle Rookie cards you might want to take a look at our sister site that specializes in Baseball Rookie Cards only.

The most expensive item with a signature of Albert Belle (Albert Belle Signed Game Worn Cleveland Indians Jersey Lot 55) was sold in March 2015 for $600.00 while the cheapest item (Albert Belle Signed Baseball Photo 8x10 COA Indians) found a new owner for $0.01 in February 2009. The month with the most items sold (15) was May 2008 with an average selling price of $9.99 for an autographed item of Albert Belle. Sold items reached their highest average selling price in June 2016 with $144.98 and the month that saw the lowest prices with $0.99 was May 2015. In average, an autographed item from Albert Belle is worth $14.95.

Most recently, these items with a signature of Albert Belle were sold on eBay - click here for more items.

Will there be a happy return for Albert Belle, and other burning questions -- Bu (03/08/15): Cleveland sports fans wonder about Albert Belle, Josh McCown and what constitutes the "DeFilippo Tree."

Albert Belle talks Corey Kluber, dance and Cinderella on visit to Cleveland Indi (02/19/15): Former Indians home-run hitter Albert Belle stopped by the team's spring training site in Goodyear, Ariz. on Thursday to see some old friends. He's still not sure if he'll be able to attend the Indians celebration of the 20th anniversary of the 1995 team that Belle led to the World Series.

No Hitter Has Ever Been More Terrifying Than Albert Belle In This Game (02/16/15): July 25, 1999 . Orioles versus Angels in Turn Ahead the Clock Day at Oriole Park at Camden Yards, hence the hideous monochrome sleeveless trashbag novelty jerseys. Albert Belle batting cleanup. Read more...

When will Cleveland Indians' Hall of Fame include Albert Belle ? Hey, Hoynsie! (03/02/13): Cleveland fans have plenty of topics in this week's mailbag for beat writer Paul Hoynes.

Albert Belle wants to be next Cleveland Indians manager (10/2012): One of baseball’s most tempestuous players has thrown himself into the Cleveland Indians’ manager search. Paul Hoynes of the The Cleveland Plain Dealer reports former Indians slugger Albert Belle emailed a request for an interview to team president Mark Shapiro.

For better or worse, Albert Belle was never boring as the face of the Cleveland (03/2012): The Indians have made peace with Albert Belle. At his finest, Belle hit for power and average like few who ever wore the uniform. He was never, ever dull.

Cleveland Indians' relationship with Albert Belle in a spring thaw: Bud Shaw's S (02/2012): Belle's appearance at spring training is a good first step toward rekindling the relationship between the organization and one of its greatest hitters.