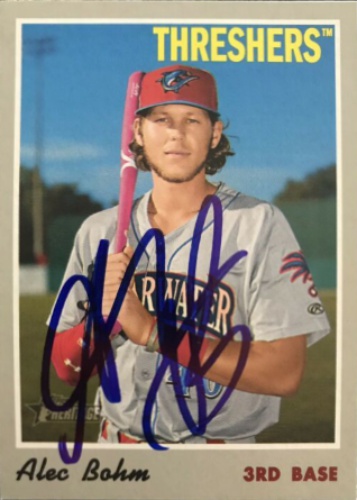 Current items with a signature of Alec Bohm

These are the most current items with a signature of Alec Bohm that were listed on eBay and on other online stores - click here for more items.

Traded items with a signature of Alec Bohm

Most recently, these items with a signature of Alec Bohm were sold on eBay - click here for more items.

Phillies' Alec Bohm situation shows why Philly fans are actually the best (04/13/22): A brief but fiery fan-player media whirlwind in Philadelphia could've gone south, but instead it showed why Philly fans are truly elite sports fans. By Adam Hermann

Philly gives Bohm ovation night after choice words (04/13/22): Phillies third baseman Alec Bohm, who made three errors Monday and later apologized for how he vented his frustration, received a standing ovation from the Philadelphia crowd on Tuesday.

Phillies win one for Alec Bohm, who doesn't really hate this place (04/12/22): Alec Bohm might bleeping hate this place, but he better love his teammates because they got him off the hook something big when they rallied for five runs in the eighth inning Monday. By Jim Salisbury

Phillies rookie Alec Bohm has already developed knack for clutch hits early in M (09/2020): If there's a 'clutch gene,' Bohm just might have it

Phillies call up top prospect Alec Bohm as team makes another major promotion (08/2020): Bohm could provide an offensive boost for the scuffling Phillies