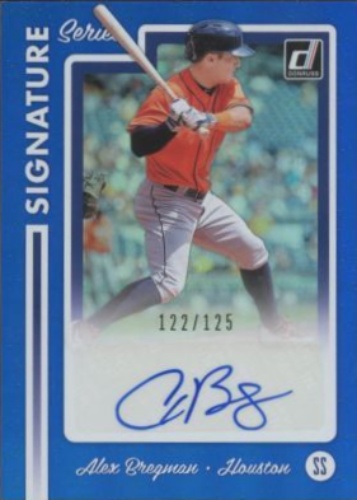 Current items with a signature of Alex Bregman

These are the most current items with a signature of Alex Bregman that were listed on eBay and on other online stores - click here for more items.

Traded items with a signature of Alex Bregman

If you're interested in Alex Bregman Rookie cards you might want to take a look at our sister site that specializes in Baseball Rookie Cards only.

The most expensive item with a signature of Alex Bregman (Alex Bregman 2016 1st Bowman Chrome auto /150 blue PSA 10 Astros autograph) was sold in September 2022 for $1100.00 while the cheapest item (2021 Topps Bunt Alex Bregman ICONIC Defenitive Silver Framed Signature) found a new owner for $0.99 in February 2022. The month with the most items sold (59) was October 2021 with an average selling price of $32.73 for an autographed item of Alex Bregman. Sold items reached their highest average selling price in July 2014 with $219.00 and the month that saw the lowest prices with $0.99 was November 2015. In average, an autographed item from Alex Bregman is worth $46.00.

Most recently, these items with a signature of Alex Bregman were sold on eBay - click here for more items.

Alex Bregman hits home run to fulfill wish of young Astros fan from Uvalde (08/15/22): 'Hey, you hit one for Uvalde!' manager Dusty Baker told Bregman when he returned to the dugout

Bregman delivers on HR ask: 'Hit one for Uvalde' (08/15/22): Hours after representatives of the Houston Astros hosted members of Texas' Uvalde community for a pregame event on Sunday, Alex Bregman delivered on one young fan's request for a home run.

Chris Flexen K's Bregman (04/2022): Mariners pitcher Chris Flexen gets Alex Bregman to swing and miss on a two-strike breaking ball to end the top half of the 5th inning

Bregman has right wrist surgery, to be OK for '22 (11/2021): Houston Astros third baseman Alex Bregman underwent surgery on his right wrist on Monday and should be ready for spring training, the team announced in a news release.

Bregman, out since June, returns to Astros (08/2021): Astros third baseman Alex Bregman on Wednesday will return from a left quadriceps strain that has kept him out of the lineup since June 16.

Bregman reinstated off IL, back for DH vs. A's (09/2020): Astros third baseman Alex Bregman was reinstated from the injured list Tuesday and is batting second in Game 1 of a doubleheader against the Athletics.

Reviewing 2015 MLB Draft: Top 10 players, including Alex Bregman and Walker Bueh (05/2020): Five years later, the 2015 draft has proven to be one of the weakest drafts in recent memory

Bregman 7th Astros player hit by pitch in 5 games (02/2020): Houston's Alex Bregman was hit on the back by St. Louis reliever Ramon Santos on Wednesday, and Bregman shrugged it off as an off-speed pitch that simply got away from Santos.

Olney: Astros fallout could leave Houston vulnerable in AL West (01/2020): An avalanche of criticism could leave Alex Bregman & Co. with a big chip on their shoulders -- and they may need it.

Hinch: Players should have fun, but also respect the game (10/2019): Houston Astros manager AJ Hinch is all for letting the young kids play - and play loud. Alex Bregman, the Astros third baseman who is one of the young stars MLB has highlighted in its ad campaigns trying to reach younger fans, carried his bat past first base after hitting a home run in the first in