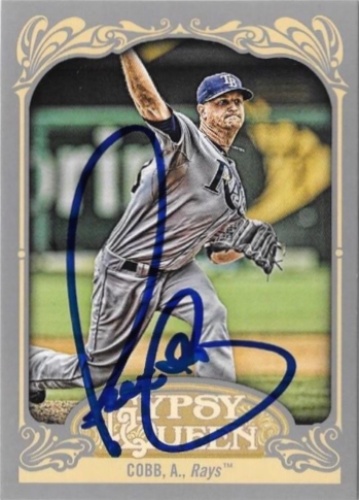 Alexander Miller Cobb (born October 7, 1987), nicknamed Swan, is an American professional baseball pitcher for the San Francisco Giants of Major League Baseball (MLB). He was drafted by the Tampa Bay Rays in the fourth round of the 2006 MLB draft, and made his MLB debut for them in 2011. He previously played for the for the Rays from 2011 through 2017, the Baltimore Orioles from 2018 to 2020, and the Los Angeles Angels in 2021. More about Alex Cobb

Current items with a signature of Alex Cobb

These are the most current items with a signature of Alex Cobb that were listed on eBay and on other online stores - click here for more items.

Traded items with a signature of Alex Cobb

The most expensive item with a signature of Alex Cobb (Alex Cobb signed full size jersey Tampa Bay Rays MLB authenticated) was sold in April 2016 for $99.95 while the cheapest item (Alex Cobb Signed Auto 2008 Bowman Rays 2011 Rookie) found a new owner for $0.25 in September 2011. The month with the most items sold (8) was December 2021 with an average selling price of $4.12 for an autographed item of Alex Cobb. Sold items reached their highest average selling price in April 2016 with $99.95 and the month that saw the lowest prices with $0.25 was September 2011. In average, an autographed item from Alex Cobb is worth $5.99.

Most recently, these items with a signature of Alex Cobb were sold on eBay - click here for more items.

New Giants starter Alex Cobb explains how he attacks hitters (12/10/21): Alex Cobb, the newest Giants starter, saw an uptick in velocity last season. He breaks that down, along with how he likes to attack hitters.

Giants' Alex Cobb 'blown away' by Logan Webb's playoff performance (12/07/21): Before he signed a two-year deal with the Giants, Alex Cobb watched them battle the Dodgers in the postseason.

Alex Cobb explains what drew him to Giants in MLB free agency (12/02/21): Alex Cobb signed a two-year deal with the Giants and said they're a team he had an eye on in 2021 as they exceeded everyone's expectations.

Angels acquire veteran RHP Cobb from Orioles (02/2021): The Angels acquired veteran pitcher Alex Cobb from the Orioles, it was announced Tuesday. Utility player Jahmai Jones will head to the Orioles as part of the deal.