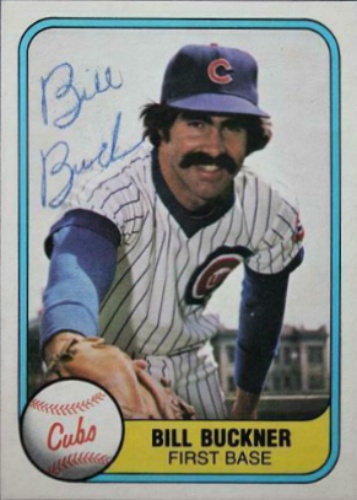 William Joseph Buckner (December 14, 1949 – May 27, 2019) was an American first baseman and left fielder in Major League Baseball (MLB) who played for five teams from 1969 through 1990, most notably the Chicago Cubs, Los Angeles Dodgers and Boston Red Sox. Beginning his career as an outfielder with the Dodgers, Buckner helped the team to the 1974 pennant with a .314 batting average, but a serious ankle injury the next year led to his trade to the Cubs before the 1977 season. The Cubs moved him to first base, and he won the National League (NL) batting title with a .324 mark in 1980. He was named to the All-Star team the following year as he led the major leagues in doubles. After setting a major league record for first basemen with 159 assists in 1982, Buckner surpassed that total with 161 in 1983 while again leading the NL in doubles. Feuds with team management over a loss of playing time resulted in his being traded to the Red Sox in the middle of the 1984 season. More about Bill Buckner

Current items with a signature of Bill Buckner

These are the most current items with a signature of Bill Buckner that were listed on eBay and on other online stores - click here for more items.

Traded items with a signature of Bill Buckner

If you're interested in Bill Buckner Rookie cards you might want to take a look at our sister site that specializes in Baseball Rookie Cards only.

The most expensive item with a signature of Bill Buckner (Bill Buckner 1987 Boston Red Sox #6 Autographed Game Used Road Jersey 75th Patch) was sold in January 2022 for $2571.21 while the cheapest item (BILL BUCKNER AUTOGRAPHED PHOTO) found a new owner for $0.01 in December 2018. The month with the most items sold (69) was May 2019 with an average selling price of $14.99 for an autographed item of Bill Buckner. Sold items reached their highest average selling price in December 2016 with $99.99 and the month that saw the lowest prices with $0.87 was August 2010. In average, an autographed item from Bill Buckner is worth $10.50.

Most recently, these items with a signature of Bill Buckner were sold on eBay - click here for more items.

Mets owner Steve Cohen reveals he owns Bill Buckner baseball from 1986 World Ser (11/26/20): Cohen bought the ball at an auction, but wished to remain anonymous at the time

Bill Buckner Is A Big Fan Of Frontier League Baseball (05/22/14): Former Major League Bill Buckner will be making appearances at Thursday and Friday night's Washington Wild Things games to sign autographs for the fans in attendance.

Bill Buckner Is A Big Fan Of Frontier League Baseball (05/2014): Former Major League Bill Buckner will be making appearances at Thursday and Friday night's Washington Wild Things games to sign autographs for the fans in attendance.

Bill Buckner is the butt of painfully funny 404 error page (04/2014): Baseball fans will require no explanation to appreciate this 404 error page delivered by the newly redesigned Boston.com.

Mookie Wilson and Bill Buckner now, oddly enough, close friends (03/2014): Wilson: “It’ll be here long after Bill and I are gone from this earth, so we just kind of embrace it.”

Bill Buckner: 'I enjoy the Northwest' (07/2012): Former MLB All-Star Bill Buckner is at PK Park this weekend as the hitting coach for the Boise Hawks, the Single-A affliliate of the Chicago Cubs.

Bill Buckner baseball sells for $418,250 (05/2012): DALLAS -- The baseball that rolled through the legs of Boston Red Sox first baseman Bill Buckner in the 1986 World Series was sold at auction Friday for $418,250. Heritage Auctions said the ball was sold to a buyer who wished to remain anonymous. ...

Bill Buckner could be added to BoSox staff (12/2011): Catcher with infamous reputation for 1986 World Series gaffe could be named hitting coach

They’re laughing with Bill Buckner now (09/2011): On his latest trip back to Boise, Bill Buckner kept getting approached by fans at a Chicago airport.

Bill Buckner enjoying managerial gig (07/2011): The former Red Sox infielder brings his Brockton Rox to Wahconah Park. PITTSFIELD -- There is more than a little gray in his hair, and the mustache isn’t as bushy as it was 25 years ago.

Bill Buckner’s Brockton Rox ready to play ball at Campanelli Stadium (05/2011): Sporting new uniforms and a new manager, the Rox open their 10th season by playing host to the Worcester Tornadoes at Campanelli Stadium at 7:05 tonight. Veteran righthander Mike Smith will take the mound for Brockton.

Bill Buckner Back In Boston (01/2011): Bill Buckner was officially introduced as the 2011 manager for the Brockton Rox on Friday, an independent professional team in the Can-Am League.