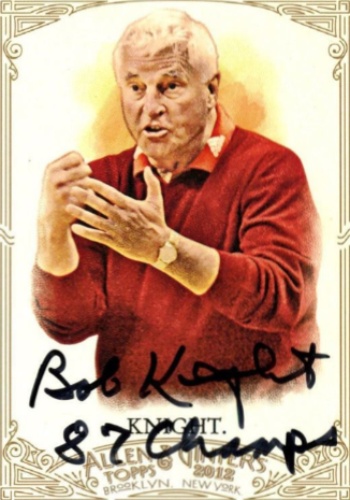 Robert Montgomery Knight (born October 25, 1940) is an American former basketball coach. Nicknamed "the General", Knight won 902 NCAA Division I men's college basketball games, a record at the time of his retirement, and currently fourth all-time, behind his former player and assistant coach Mike Krzyzewski of Duke, Roy Williams of University of North Carolina Men’s Basketball, and Jim Boeheim of Syracuse, of whom Boeheim is still active. Knight is best known as the head coach of the Indiana Hoosiers from 1971 to 2000. He also coached at Texas Tech (2001–2008) and at Army (1965–1971). More about Bob Knight

Current items with a signature of Bob Knight

These are the most current items with a signature of Bob Knight that were listed on eBay and on other online stores - click here for more items.

Traded items with a signature of Bob Knight

The most expensive item with a signature of Bob Knight (Indiana Basketball Legends Signed Floorboard COA Bob Knight Buckner May Cheaney) was sold in February 2020 for $999.99 while the cheapest item (Bob Knight Autographed Wilson NCAA Basketball) found a new owner for $0.01 in May 2016. The month with the most items sold (9) was December 2019 with an average selling price of $90.00 for an autographed item of Bob Knight. Sold items reached their highest average selling price in September 2014 with $250.00 and the month that saw the lowest prices with $5.99 was January 2015. In average, an autographed item from Bob Knight is worth $54.99.

Most recently, these items with a signature of Bob Knight were sold on eBay - click here for more items.

Knight Nation Votes: Duffy In Top 5 (01/21/19): UCF senior Chris Duffy did not even start the season on the official Watch List. But less than four months later, the Orlando native learned Tuesday that he is one of five finalists for the USA Baseball Golden Spikes Award, presented to the top amateur player in the country. “Right now I can’t belie

Bob Knight Screams At Fans Blocking His View During Live Broadcast (03/08/15): If you’re not an avid fan of the American Athletic Conference, Thursday nights and ESPN2,...

Best Hoosier moments from Parks and Recreation: Swanson as Bob Knight (12/2014): Ron Swanson spoofs the moment when former Indiana University basketball coach Bob Knight was ejected from a game for throwing a chair.

Children of fatally shot Canberra truck driver Bob Knight call for an end to gun (06/2014): David and Catherine Knight know from experience that a phone call costs less than a funeral.

Updated: Popular Leigh primary school headteacher Bob Knight dies in Spain (05/2014): A POPULAR Leigh headteacher has died while on a half term holiday in Spain.

Quest for a photo with Bob Knight in Lexington (02/2014): The FOX Sports College Basketball Road Trip has a bigger goal than sticking it to the veteran coach, but when opportunity strikes ... Read how things worked out in Kentucky.

Bob Knight should return for game, Pat says (11/2013): Pat Knight hopes that one day his father will let go of his grudge against Indiana and return for a game at Assembly Hall, he told USA Today Sports.

Too soon to compare Kliff Kingsbury to Bob Knight? (10/2013): Right now, it feels good to be a Tech fan. Almost the way it felt in 2001 when legendary coach Bob Knight joined the coaching staff at Texas Tech.

Col Bob Knight , MBE: Norfolk St John commander had a second career at UEA (03/2013): A former head of the St John Ambulance in Norfolk, Col Bob Knight , who has died aged 95, was among a handful of army officers twice evacuated from France in 1940.

Bob Knight on Georgia player: 'I would've shot him' (11/2012): On the surface, Monday night's matchup between Indiana and Georgia didn't look like anything more than another inferior opponent on the No. 1 Hoosiers' schedule.

Stories flow from Bob Knight during Greenwood library fundraiser (10/2012): Bob Knight back in familiar territory telling familiar stories on Thursday. An appreciative crowd of about 1,000 Indiana basketball fans loved every minute of it.

Six years jail for Bob Knight's killer (08/2012): THE man who fired the shot that killed truckie Bob Knight will spend close to six years in jail.

Neil Reed dies; player was choked by Bob Knight in ’97 (07/2012): Neil Reed, the Indiana University basketball player who was choked by coach Bob Knight in a practice in 1997, died Thursday at the age of 36. Reed, who died in Nipomo, Calif., had suffered a massive heart attack Wednesday, according to Nola.com . Read full article >>