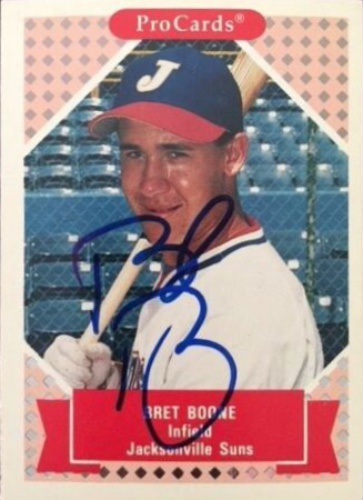 Current items with a signature of Bret Boone

These are the most current items with a signature of Bret Boone that were listed on eBay and on other online stores - click here for more items.

Traded items with a signature of Bret Boone

The most expensive item with a signature of Bret Boone (Bret Boone JSA Mariners Jersey Signed Autographed AUTO BIN C) was sold in April 2016 for $199.97 while the cheapest item (bret boone autographed sports illustrated signed reds) found a new owner for $0.01 in August 2009. The month with the most items sold (14) was September 2015 with an average selling price of $0.99 for an autographed item of Bret Boone. Sold items reached their highest average selling price in April 2016 with $129.99 and the month that saw the lowest prices with $0.99 was November 2018. In average, an autographed item from Bret Boone is worth $6.99.

Most recently, these items with a signature of Bret Boone were sold on eBay - click here for more items.

Boone downplays Judge's comment about Harper (02/05/19): Free agents Harper and Manny Machado still are available, but both are expected to sign elsewhere.

Former All-Star 2nd baseman Bret Boone is writing a memoir - Quincy Herald-Whig (02/27/15): NEW YORK (AP) - Bret Boone figures the best way to tell a baseball story is through his own family. The former Gold Glove second baseman has a deal with the Crown division of Penguin Random House for the memoir "Runs In the Family." He is the son, grandson and brother of former major leaguers.

Bret Boone Daydreams About Softball Dominance and a Fancy Beef Jerky Dinner (05/2013): What’s this video, you ask? Oh, nothing, just an average day for Bret Boone, daydreaming about rec men’s softball while dining with two attractive close-sitters in a seemingly fancy restaurant that doesn’t skimp on the beef jerky entrees or votive candles.