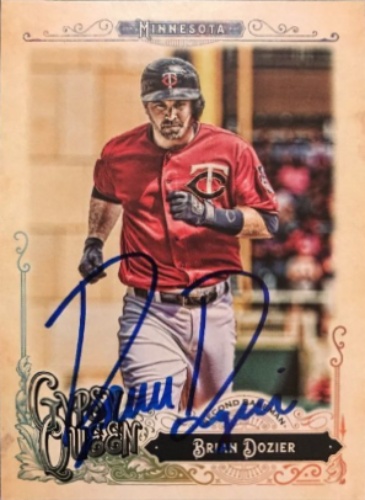 James Brian Dozier (/ˈdoʊʒər/;born May 15, 1987) is an American former professional baseball second baseman. The Minnesota Twins selected Dozier in the eighth round of the 2009 Major League Baseball Draft. He made his MLB debut in 2012 and he played in MLB for the Twins, Los Angeles Dodgers, Washington Nationals and New York Mets. Dozier was an All-Star in 2015, and won a Gold Glove Award in 2017. More about Brian Dozier

Current items with a signature of Brian Dozier

These are the most current items with a signature of Brian Dozier that were listed on eBay and on other online stores - click here for more items.

Traded items with a signature of Brian Dozier

The most expensive item with a signature of Brian Dozier (Brian Dozier signed 2016 Game Used Under Armour Custom Cleats Twins) was sold in December 2017 for $299.00 while the cheapest item ( Brian Dozier 2nd baseman of the Twins Autographed ticket stub!) found a new owner for $0.75 in April 2013. The month with the most items sold (25) was September 2016 with an average selling price of $19.99 for an autographed item of Brian Dozier. Sold items reached their highest average selling price in April 2017 with $114.99 and the month that saw the lowest prices with $0.99 was May 2010. In average, an autographed item from Brian Dozier is worth $15.96.

Most recently, these items with a signature of Brian Dozier were sold on eBay - click here for more items.

Brian Dozier bangs on trash can to troll Astros while rewatching 2019 World Seri (04/15/20): Many people on the video call laughed, while some hid in an attempt to remove themselves from this narrative

Padres sign Brian Dozier, beef up infield depth with right-handed bat (02/23/20): Dozier fits nicely with a roster that has lots of platoon flexibility

Musician Pedro Capó, singer of Brian Dozier's favorite song, visits the National (10/27/19): The singer of 'Calma' a song that Brian Dozier has jammed out to more than a few times, made an appearance at the World Series.

Only Brian Dozier would wear a shirt with a picture of his shirtless celebration (10/2019): Dozier rocking a t-shirt of himself in his shirtless state might be the ultimate flex.

Tom Powers: Twins' unconventional Brian Dozier does things his way at second (03/2015): FORT MYERS, Fla. -- Brian Dozier plays second base the way most kids play in a sandbox. He's always rolling around in the dirt and kicking up dust.

Twins: Brian Dozier 'shocked' by Ron Gardenhire's dismissal (09/2014): Even in the final days of a fourth straight 90-loss season, there were no signs that Ron Gardenhire thought he was about to be replaced as Twins manager.