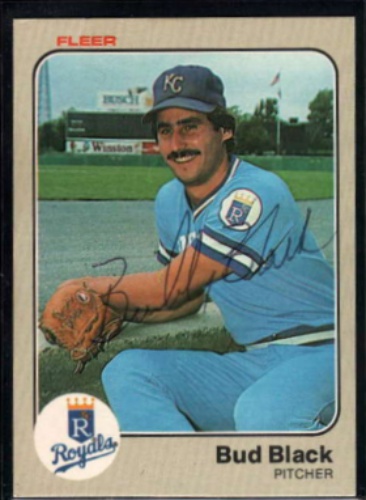 Harry Ralston "Bud" Black (born June 30, 1957) is an American professional baseball manager and former player who is the manager of the Colorado Rockies. He played in Major League Baseball (MLB) as a pitcher from 1981 through 1995, most notably for the Kansas City Royals and Cleveland Indians. He coached the Anaheim Angels / Los Angeles Angels of Anaheim from 2000 through 2006, and managed the San Diego Padres from 2007 through 2015. He was named the National League Manager of the Year in 2010. More about Bud Black

Current items with a signature of Bud Black

These are the most current items with a signature of Bud Black that were listed on eBay and on other online stores - click here for more items.

Traded items with a signature of Bud Black

The most expensive item with a signature of Bud Black (Dale Earnhardt Jr SIGNED IMHOF BUD BLACK car GAI COA #8) was sold in June 2008 for $202.50 while the cheapest item (1989 DONRUSS AUTOGRAPHED CARD BUD BLACK SD PADRES MGR) found a new owner for $0.10 in July 2008. The month with the most items sold (7) was March 2022 with an average selling price of $2.12 for an autographed item of Bud Black. Sold items reached their highest average selling price in April 2018 with $59.99 and the month that saw the lowest prices with $0.59 was April 2010. In average, an autographed item from Bud Black is worth $3.10.

Most recently, these items with a signature of Bud Black were sold on eBay - click here for more items.

Black open to doubleheaders when MLB returns (03/20/20): With Opening Day pushed to mid-May at the earliest, Rockies manager Bud Black said he'd be "up for some sort of doubleheader situation" so teams could fit in as many games as possible this season.

Rockies' Black on Arenado rift: 'Going to be fine' (01/2020): At the Rockies' fan fest on Saturday, manager Bud Black said he believes the situation between All-Star Nolan Arenado and the front office will work itself out. "Things are going to be fine," Black said.

VIDEO: Bud Black Mic'd Up (03/2015): U-T TV gives you a behind the scenes look at a Padres Spring Training workout.

Padres Manager Bud Black (01/2015): SAN DIEGO (KUSI) - Bud Black was in to talk about Spring Training, and the 2015 season. The Padres have the most exciting lineup since the 1998 World Series team, and there is a lot of energy, in and outside the field.

Morning links: Bud Black loses his cool (08/2014): Padres-related news from around the web.

Bud Black aims to launch Padres into run at Diamondbacks (07/2013): WASHINGTON — During his tenure as San Diego manager, Bud Black has guided teams that finished just one and a half and two games back of the winners in the National League’s West division.

Bud Black to remain Padres manager (11/2012): The Padres announced Tuesday they will keep Bud Black as manager through 2015.

A day in the baseball life of Bud Black (09/2012): Two keys to Black's managerial style are movement and memory

Acee: Bud Black should be Padres manager in '13 (08/2012): Manager has made moves, keeps his team believing, needs a chance with more talent.