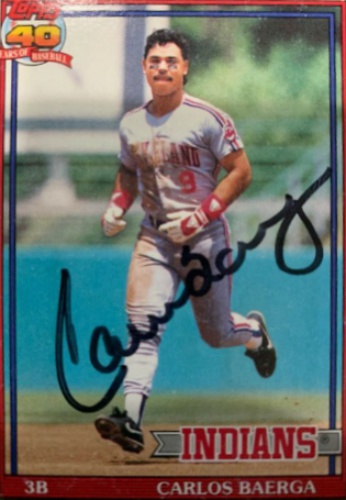 Carlos Obed Ortiz Baerga (/baɪˈɛərɡə/; Spanish: ; born November 4, 1968) is a Puerto Rican former Major League Baseball player. Baerga was known for his superb hitting abilities during his first stint with the Cleveland Indians in the early-to-mid-1990s, accumulating impressive batting statistics, earning three All-Star appearances (1992, 1993, 1995), two Silver Slugger Awards (1993, 1994), and making key contributions to the Indians' 1995 postseason run. He was considered one of Major League Baseball's hardest-hitting middle infielders by 1995 with his superb bat speed and switch-hitting power. After spending most of his career as a second baseman, he was used at various positions late in his career. Baerga was elected into the Indians Hall of Fame in 2013. More about Carlos Baerga

Current items with a signature of Carlos Baerga

These are the most current items with a signature of Carlos Baerga that were listed on eBay and on other online stores - click here for more items.

Traded items with a signature of Carlos Baerga

The most expensive item with a signature of Carlos Baerga (Carlos Baerga 1995 All-Star Game Commemorative Bat - Signed by American League) was sold in February 2016 for $250.00 while the cheapest item (97 UD Upper Deck Carlos BAERGA Indians Signed AUTO #31) found a new owner for $0.01 in April 2010. The month with the most items sold (13) was April 2008 with an average selling price of $1.32 for an autographed item of Carlos Baerga. Sold items reached their highest average selling price in February 2016 with $125.96 and the month that saw the lowest prices with $0.99 was August 2009. In average, an autographed item from Carlos Baerga is worth $6.00.

Most recently, these items with a signature of Carlos Baerga were sold on eBay - click here for more items.

Former Indian Carlos Baerga talks about his time in, and after, baseball (07/31/14): What's Carlos Baerga been up to? The former Cleveland Indian spent more than two hours signing autographs on the first day of the annual National Sports Collectors Convention. He took time to speak with The Plain Dealer.

After 25 years, Indians fan re-creates photo with Carlos Baerga: Tribe Home Open (04/04/14): After 25 years, Ashley Short got her chance to re-create a memory that sparked her lifelong love of her hometown team.

A lineup to remember: Carlos Baerga, John Hart share memories of 1995 Cleveland (06/23/13): Carlos Baerga not only remembers the good old days, he was right in the middle of them.

Jim Ingraham's baseball notes: Carlos Baerga recalls 1990s Tribe fondly (06/22/13): Carlos Baerga not only remembers the good old days. He was right in the middle of them.

Carlos Baerga and John Hart trigger fond memories for Indians' fans: Terry Pluto (06/20/13): John Hart and Carlos Baerga are two of the key people who helped make the Cleveland Indians of the 1990s.

Indians name Carlos Baerga, John Hart to Hall of Fame (02/2013): Fan favorite second baseman will be joined by architect of 1990s World Series teams in being selected for an elite group honored by the club.

Carlos Baerga Throws Support Behind Rick Santorum (03/2012): Although our own primary match-up is in the rear view mirror, the GOP candidates are still blasting away at one another on the national stage.