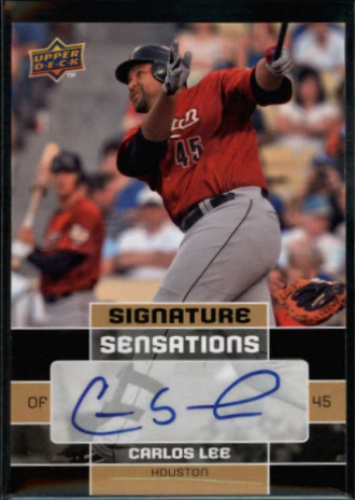 Current items with a signature of Carlos Lee

These are the most current items with a signature of Carlos Lee that were listed on eBay and on other online stores - click here for more items.

Traded items with a signature of Carlos Lee

The most expensive item with a signature of Carlos Lee (CARLOS LEE AUTOGRAPHED JERSEY JSA CERTIFIED SIGNED GAME USED BIRMINGHAM BARONS) was sold in March 2019 for $325.00 while the cheapest item (Carlos Lee 99 Team Best Certified AUTO Signed card) found a new owner for $0.01 in January 2011. The month with the most items sold (25) was May 2008 with an average selling price of $14.99 for an autographed item of Carlos Lee. Sold items reached their highest average selling price in March 2019 with $325.00 and the month that saw the lowest prices with $0.50 was March 2018. In average, an autographed item from Carlos Lee is worth $9.99.

Most recently, these items with a signature of Carlos Lee were sold on eBay - click here for more items.

Carlos Lee retires with 358 career home runs (06/22/13): Carlos Lee, who played for the Houston Astros and Miami Marlins last year, announced his retirement after 14 seasons in the majors, ESPNDeportes,com reported. Lee, 37, came up with the White Sox as a 23-year-old in 1999.

RBI producer Carlos Lee hopes to return to Marlins in 2013 (08/2012): Carlos Lee knows there’s a chance he might play for a different team next year. But he said he’d like to return to the Marlins.

HBT: Carlos Lee reportedly turned down deal to Yanks (07/2012): 3:25 p.m. EDT update: USATODAY’s Bob Nightengale reports that Soriano won’ t be moved before the deadline. Of course, with his contract, he’ll clear waivers and could be dealt afterwards. CBS Sports’ Danny Knobler confirms that “Tigers people say they are not getting Soriano.” ///

Source: Dodgers eye Carlos Lee (06/2012): The Dodgers, trying to add a big bat, are in discussions with the Astros about a trade for first baseman Carlos Lee, according to major-league sources.

2011 MLB Trade Rumors – LA Angels Looking at Carlos Lee? (09/2011): The LA Angels lost three of four to the AL West leading Texas Rangers last week, and the thought of winning the division seemed lost, but the team has rebounded since that series and now trail Texas by . . .