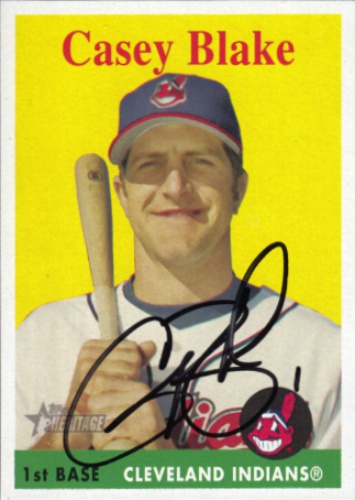 William Casey Blake (born August 23, 1973) is an American former professional baseball third baseman. He played in Major League Baseball (MLB) for the Toronto Blue Jays, Minnesota Twins, Baltimore Orioles, Cleveland Indians, and Los Angeles Dodgers. He had alternated between playing at third base and first base before becoming a full-time third baseman with the Indians. In 2005, Blake moved to right field to accommodate the Indians' signing of third baseman Aaron Boone, and stayed there for two seasons before moving back to third base. More about Casey Blake

Current items with a signature of Casey Blake

These are the most current items with a signature of Casey Blake that were listed on eBay and on other online stores - click here for more items.

Traded items with a signature of Casey Blake

The most expensive item with a signature of Casey Blake (Wichita State University Autographed Baseball 1995 Gene Stephenson Casey Blake) was sold in February 2021 for $109.95 while the cheapest item (2004 DONRUSS TEAM HEROES CASEY BLAKE INDIANS SIGNED) found a new owner for $0.01 in February 2010. The month with the most items sold (15) was October 2008 with an average selling price of $9.99 for an autographed item of Casey Blake. Sold items reached their highest average selling price in February 2021 with $109.95 and the month that saw the lowest prices with $0.29 was January 2010. In average, an autographed item from Casey Blake is worth $6.44.

Most recently, these items with a signature of Casey Blake were sold on eBay - click here for more items.

Asheville YWCA honors AC-T's Casey Blake (08/27/12): ASHEVILLE — Asheville Citizen-Times staffer Casey Blake will be among the 20 women and groups honored at the YWCA of Asheville’s 21st annual Tribute to Women of Influence awards next month.

Casey Blake: Breasts distract from equality (07/27/12): So here’s a fun fact I’d like to share with you, dear readers, about being a good feminist: You can do it completely effectively with your shirt still on.

In the loop: Paul Rhoads, Iowa football, Casey Blake, Lolo Jones (05/2012): Iowa State football coach Paul Rhoads already has a reputation of being emotional, based on viral videos showing his energized postgame speeches. So it's no surprise that Rhoads fights back tears talking his mother.

Rockies release 3B Casey Blake (03/2012): Just days before Easter, a new billboard about being gay and Christian is going ... Heavy rain Tuesday morning came at an especially important time for local ...

PITTSBURGH -- Los Angeles Dodgers third baseman Casey Blake is having season-end (09/2011): Blake did not travel to Pittsburgh for the Dodgers' game against the Pirates on Thursday, remaining in Los Angeles to have tests in advance of the operation Tuesday.

Frustrating season hasn't affected Dodger Casey Blake's determination (08/2011): He's 13 years deep into a career he never dreamed would last even 10 seasons, but the end never has seemed farther away to Dodgers third baseman Casey Blake than it does now.

Dodgers' Casey Blake doesn't know when he will return (07/2011): The ailing third baseman, who has a pinched nerve in his neck, is on the disabled list for the third time this season. Blake has sat out 42 games this season. Casey Blake said he has tried to push through the discomfort. He has rested completely. He has received different forms of treatment.