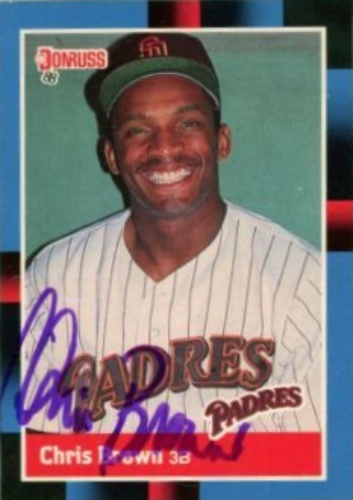 Christopher Maurice Brown (born May 5, 1989) is an American singer, songwriter, dancer, graffiti artist and actor. According to Billboard, Brown is one of the most influential and successful R&B singers ever, with several considering him the "King of R&B" alongside Usher and R. Kelly. His musical style has been defined as polyhedric, with his R&B being characterized by several influences from other genres, mainly hip hop and pop music. His lyrics develop predominantly over themes of sex, lovesickness, regret, romantic love, fast life, desire, and the difficulty of managing emotions. Being described by media outlets and critics as one of the biggest talents of his time in urban music, Brown gained a cult following, and wide comparisons to Michael Jackson for his stage presence as a singer-dancer. More about Chris Brown

Current items with a signature of Chris Brown

These are the most current items with a signature of Chris Brown that were listed on eBay and on other online stores - click here for more items.

Traded items with a signature of Chris Brown

If you're interested in Chris Brown Rookie cards you might want to take a look at our sister site that specializes in Baseball Rookie Cards only.

The most expensive item with a signature of Chris Brown (JSA Graffiti CHRIS BROWN Signed Autographed FRAMED CD Album) was sold in June 2013 for $499.99 while the cheapest item (1988 O Pee Chee #112 Chris Brown signed/autographed card San Diego Padres) found a new owner for $0.01 in November 2013. The month with the most items sold (8) was October 2008 with an average selling price of $4.53 for an autographed item of Chris Brown. Sold items reached their highest average selling price in June 2013 with $256.99 and the month that saw the lowest prices with $0.99 was December 2008. In average, an autographed item from Chris Brown is worth $4.99.

Most recently, these items with a signature of Chris Brown were sold on eBay - click here for more items.

Chris Brown: I Didn't Get Beat Up at Meek Mill's Party (02/11/15): Singer says he wasn't even involved in Grammy night fight.

Chris Brown, Tyga Announce 'Fan of a Fan' Album Release Date (01/24/15): Mark it on the calendar. Chris Brown and Tyga are slated to release their Fan Of A Fan: The Album next month, Breezy confirmed on...

Chris Brown Returns to Court After Rehab Dismissal (12/13/14): The 24-year-old R&B singer spent the weekend in jail after being arrested after his dismissal from a Malibu treatment facility for violating its rules. read more

Chris Brown On Coming To Terms With Rihanna Assault (11/2014): Breezy shares his thoughts on Ri-Ri, Drake and Karrueche Tran in heartfelt interview...

Chris Brown Offers Advice To Ex-Baltimore Raven Ray Rice (09/2014): The singer also revealed he still talks to his therapist twice a week. Chris Brown has weighed in on the controversy surrounding footballer Ray Rice, offering advice and drawing on his own experiences following his 2009 assault conviction.

Chris Brown's neighbor threatens to shoot him for trespassing (07/2014): Veronica Linares LOS ANGELES, July 30 (UPI) -- Chris Brown's new neighbor is prepared to use legal force if the troubled singer ever steps onto his property.

Chris Brown: Will He Go To BET Awards? — Latest News (06/2014): Because of potentially awkward run-ins, Chris can’t seem to make up his mind whether to attend the BET Awards in Los Angeles on June 2 or not.

Chris Brown Headed Back To Jail (05/2014): Chris Brown is back in jail, sentenced to another 131 days after admitting he’d violated the terms of his probation.… READ ON

Chris Brown told to return to rehab for 2 months (02/2014): LOS ANGELES (AP) — A California judge ordered Chris Brown to remain in an anger-management rehab program and told the pop singer to return to court in two months.

Chris Brown Excused From Washington, D.c. Court Appearance (11/2013): Embattled star Chris Brown has been given permission to skip a day in court in Washington, D.C. so he can concentrate on a lockdown rehab stint.The...

Chris Brown says arrest for beating up Rihanna was “biggest wake-up call” (10/2013): R&B star Brown attacked the singer in 2009 after a pre-Grammys party, leaving her bloodied and bruised. Now Brown, 24, has admitted: “It was probably one of the most troubling times in my life.

Chris Brown Opens Up About Rihanna, Karrueche Tran Love Triangle (09/2013): In the cover story, the singer opens up about his love triangle with Rihanna and Karrueche Tran, his anger issues, and Jay Z getting a pass for his checkered past.

Chris Brown Ordered To Complete 1,000 More Hours Of Community Service (08/2013): R&B singer Chris Brown appears in court with his attorney Mark Geragos for a probation violation hearing on August, 16 2013 in Los Angeles, California. Brown's probation has been reinstated and he must perform 1,000 hours of community service.

Rogers pulls sponsorship after outcry over Chris Brown show (07/2013): Rogers says it's pulling its sponsorship of an upcoming Chris Brown concert in Dartmouth after people on Twitter called for a boycott of the show.

Chris Brown leaves duet with Rihanna OFF his new album? (06/2013): Breakups are hard for us regular human beings but, when you're a celebrity, things get jsut that little bit more painful. From endless press speculation about who did what and with who, to seeing pics of your former lover out...

Rihanna And Chris Brown Gossip Round Up: Did The Couple Get Engaged In Hawaii? (02/2013): The Couple Are Said To Be Already Planning Their Wedding!

Chris Brown Posts ‘You Are The Father’ Pic: Is He Going To Be A Dad? (01/2013): Chris and Rihanna both use Instagram to share intimate photos, so why not use the social media app to announce a pregnancy!

Chris Brown Rushes To Rihanna's Side After Partying With Elton John? (10/2012): Apparently Rushed To Ri's Recording Studio After Leaving The Party Early...