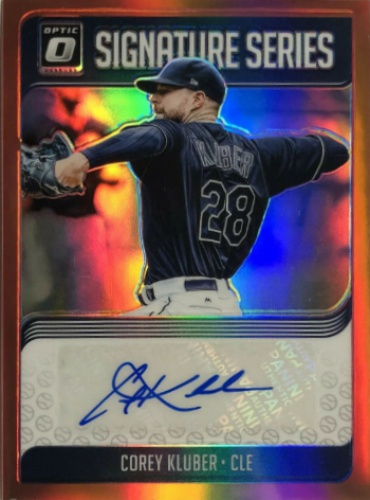 Corey Scott Kluber (born April 10, 1986) is an American professional baseball pitcher for the Tampa Bay Rays of Major League Baseball (MLB). He previously played in MLB for the Cleveland Indians, Texas Rangers and New York Yankees. He made his MLB debut in 2011 as a member of the Indians. A power pitcher, Kluber achieves high strikeout rates through a two-seam sinker and a breaking ball that variously resembles a slider and a curveball. More about Corey Kluber

Current items with a signature of Corey Kluber

These are the most current items with a signature of Corey Kluber that were listed on eBay and on other online stores - click here for more items.

Traded items with a signature of Corey Kluber

If you're interested in Corey Kluber Rookie cards you might want to take a look at our sister site that specializes in Baseball Rookie Cards only.

The most expensive item with a signature of Corey Kluber (Corey Kluber signed 2015 Game Used Fielding Glove w/ Sidsgraphs COA Indians Cy) was sold in November 2017 for $1150.00 while the cheapest item (Corey Kluber - 2021 Topps Archives Signature Series (1) Box Break Video Link) found a new owner for $0.55 in February 2021. The month with the most items sold (35) was May 2021 with an average selling price of $30.00 for an autographed item of Corey Kluber. Sold items reached their highest average selling price in December 2016 with $179.00 and the month that saw the lowest prices with $0.99 was November 2011. In average, an autographed item from Corey Kluber is worth $24.99.

Most recently, these items with a signature of Corey Kluber were sold on eBay - click here for more items.

Rays ask Corey Kluber to continue his success vs. White Sox (04/16/22): The Tampa Bay Rays are looking to bounce back after a series opening loss to the Chicago White Sox.

Corey Kluber signs one-year deal with Rays after spending 2021 season with Yanke (12/01/21): The 35-year-old Kluber is reportedly getting an $8 million deal

Rays look to solidify rotation with Corey Kluber (11/2021): Could the Rays' unconventional approach help lead to a return to form for Kluber?

Yankees' Corey Kluber returns to rotation after three-month IL stint and struggl (08/2021): The Yankees, however, do now have some stability in the rotation

Yankees' Kluber confident of return this season (07/2021): Corey Kluber threw 25 pitches Friday in his first mound session since being placed on the 60-day injured list, and expressed confidence he will return from his shoulder injury this season.

Yanks' Kluber could resume throwing in few days (06/2021): Yankees starter Corey Kluber could begin a flat-ground throwing program in the next few days, manager Aaron Boone said, but the right-hander's return from a shoulder injury remains pegged at two months.

Yanks' Kluber (shoulder) out at least 2 months (05/2021): The Yankees announced Wednesday that starter Corey Kluber will miss at least two months with a shoulder injury and that first baseman Luke Voit will also head to the injured list with a right oblique strain.

Kluber's goal: Prove staff isn't Cole 'and the rest' (02/2021): Corey Kluber said he understands the perception that the New York Yankees' rotation is Gerrit Cole "and the rest," but says the group hopes to "take away those question marks" this season.

Kluber excited to join Yanks; DJ relieved to return (01/2021): Limited to one inning in two years, Corey Kluber believes his ability will show with the retooling New York Yankees. He finalized his contract on the day AL batting champion DJ LeMahieu finished a $90 million, six-year contract to remain in pinstripes.

Rangers turn down $18M option on Kluber for '21 (10/2020): Former Cy Young Award winner Corey Kluber becomes a free agent after the Rangers turned down an $18 million option for the 2021 season. Texas did say it was interested in re-signing Kluber to a lesser deal.

Kluber shut down 4 weeks with shoulder injury (07/2020): Rangers starter Corey Kluber will be out at least four weeks after suffering a shoulder injury in his first start.

Rangers' Kluber back 10 months after arm broken (03/2020): Corey Kluber faced major league hitters for the first time in 10 months -- in a new uniform, no less -- and said he didn't feel any different.

Kluber glad to join Texas, put 'trying' '19 in past (12/2019): Corey Kluber is returning to Texas to pitch for the Rangers. The two-time Cy Young Award winner will leave it to others to say whether his hometown team has its next ace.