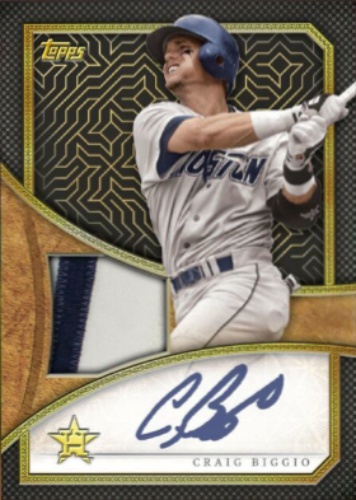 Craig Alan Biggio (/ˈbɪdʒioʊ/; born December 14, 1965) is an American former second baseman, outfielder and catcher in Major League Baseball who played his entire career from 1988 through 2007 for the Houston Astros. A seven-time National League (NL) All-Star often regarded as the greatest all-around player in Astros history, he is the only player ever to be named an All-Star and to be awarded Silver Slugger Award at both catcher and second base. With longtime teammates Jeff Bagwell and Lance Berkman, he formed the core of the "Killer B's" who led Houston to six playoff appearances from 1997 to 2005, culminating in the franchise's first World Series appearance in 2005. At the end of his career, he ranked sixth in NL history in games played (2,850), fifth in at bats (10,876), 21st in hits (3,060), and seventh in runs scored (1,844). His 668 career doubles ranked sixth in major league history, and are the second-most ever by a right-handed hitter; his 56 doubles in 1999 were the most in the major leagues in 63 years. More about Craig Biggio

Current items with a signature of Craig Biggio

These are the most current items with a signature of Craig Biggio that were listed on eBay and on other online stores - click here for more items.

Traded items with a signature of Craig Biggio

If you're interested in Craig Biggio Rookie cards you might want to take a look at our sister site that specializes in Baseball Rookie Cards only.

The most expensive item with a signature of Craig Biggio (1996 Craig Biggio Houston Astros Game Used & Signed Baseball Jersey) was sold in July 2022 for $2800.00 while the cheapest item (Craig Biggio 1994 UD Collector's Choice #255 SILVER SIGNATURE ASTROS) found a new owner for $0.55 in February 2020. The month with the most items sold (55) was March 2008 with an average selling price of $19.50 for an autographed item of Craig Biggio. Sold items reached their highest average selling price in October 2018 with $279.00 and the month that saw the lowest prices with $3.50 was November 2014. In average, an autographed item from Craig Biggio is worth $29.99.

Most recently, these items with a signature of Craig Biggio were sold on eBay - click here for more items.

Jays prospect Cavan Biggio hopes to be part of an impressive new wave | The Star (02/01/19): Biggio’s slash line caught up to his lineage during a breakthrough Double-A season.

"Craig Biggio Day" at Minute Maid Park (01/2015): Who knew 28 years ago when Craig Biggio started his Major League Baseball career in Houston that it would culminate with a celebration fit for, well, a hall of famer?

Craig Biggio could be a top candidate for the Astros job (09/2014): In this day and age, experience is not really necessary.

Craig Biggio opens up about Hall of Fame vote (03/2014): Former Houston Astros second baseman Craig Biggio is in Kissimmee, Florida this week to lend a helping hand to some of the young players on the roster.

Why one idiot didn’t vote for Craig Biggio (01/2014): CINCINNATI, OH – Craig Biggio is a cheater – at least that’s what Jerry Dowling of Cincinnati, Ohio says. Dowling isn’t a baseball writer he’s a sports cartoonist; but for some reason he gets to vote on who should get …

JAWS: Craig Biggio (12/2013): Craig Biggio should have been elected to the Hall of Fame last year. His chances might be worse now.

Photos: Craig Biggio and Astros host annual Sunshine Kids party at Minute Maid P (10/2013): Sunshine Kids, the non-profit organization dedicated to children with cancer, hosted the event to give kids and their families the opportunity to hit pitches thrown by the Astros legend along with the opportunity to play at the ballpark.

Phillies draft Craig Biggio's son, Cavan, who will not sign (06/2013): The Phillies used their 29th-round pick Saturday on a second baseman with rich baseball bloodlines who will never play for them.

Jersey retirement highlights Craig Biggio's legend at Seton Hall (04/2012): During three years in South Orange, Biggio became one of the best Pirates ever