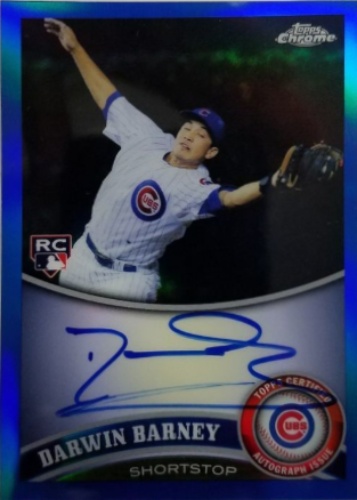 Darwin James Kunane Barney (born November 8, 1985) is an American former professional baseball infielder and current coach. He played in Major League Baseball (MLB) for the Chicago Cubs, Los Angeles Dodgers, and Toronto Blue Jays. As a member of the Cubs in 2012, he won both the Rawlings Gold Glove Award and the Fielding Bible Award in recognition of his defensive skills at second base. More about Darwin Barney

Current items with a signature of Darwin Barney

These are the most current items with a signature of Darwin Barney that were listed on eBay and on other online stores - click here for more items.

Traded items with a signature of Darwin Barney

If you're interested in Darwin Barney Rookie cards you might want to take a look at our sister site that specializes in Baseball Rookie Cards only.

The most expensive item with a signature of Darwin Barney (Chicago Cubs SIGNED Darwin Barney Majestic Sz 48 Authentic Jersey COA Certified) was sold in October 2021 for $129.99 while the cheapest item (DARWIN BARNEY CHICAGO CUBS PROSPECT SIGNED 8X10 PHOTO) found a new owner for $0.01 in July 2010. The month with the most items sold (13) was July 2011 with an average selling price of $9.99 for an autographed item of Darwin Barney. Sold items reached their highest average selling price in October 2021 with $68.99 and the month that saw the lowest prices with $0.01 was October 2009. In average, an autographed item from Darwin Barney is worth $10.00.

Most recently, these items with a signature of Darwin Barney were sold on eBay - click here for more items.

The Dodgers sign Darwin Barney to a one-year deal (12/03/14): The Dodgers have a solid backup infielder now.

Dodgers Avoid Arbitration With Darwin Barney (12/02/14): The Dodgers have reached agreement on a one-year deal with utility infielder Darwin Barney to avoid arbitration, the team announced. Los Angeles also tendered contracts to its remaining arb-eligible players, per the release. Barney will receive a $2.525MM salary next … Continue reading →

Darwin Barney could play shortstop for Los Angeles Dodgers: Metro League roundup (08/12/14): A recap of the top links from in and around the Metro League.

Darwin Barney (11/2013): Cubs infielder Darwin Barney joins the DK Show to talk about how he spends the offseason, whether he follows trade rumors, and his first impressions on new manager Rick Renteria. …

Waiver claim reunites former OSU teammates Darwin Barney, Cole Gillespie in Chic (07/2013): Barney and Gillespie helped the Beavers win the national title in 2006, and now they're teammates with the Cubs.

Darwin Barney singles, doubles, homers as Cubs beat Astros 3-1 (06/2013): With a chance to complete the cycle in the seventh inning, the former Southridge and OSU standout flies out to deep center field.

Cubs' Darwin Barney comes within 1 inning of error-less record (09/2012): The former Oregon State star was three outs from breaking Placido Polanco's major league record of 141 games without an error at second base.

Darwin Barney sets NL record for errorless games at 114, just barely (08/2012): Darwin Barney is charged with an error but it is reversed.