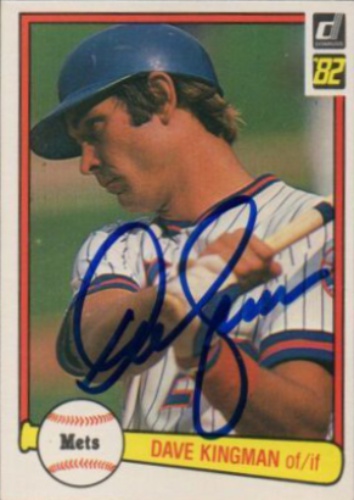 Current items with a signature of Dave Kingman

These are the most current items with a signature of Dave Kingman that were listed on eBay and on other online stores - click here for more items.

Traded items with a signature of Dave Kingman

If you're interested in Dave Kingman Rookie cards you might want to take a look at our sister site that specializes in Baseball Rookie Cards only.

The most expensive item with a signature of Dave Kingman (DAVE KINGMAN KONG CHICAGO CUBS ERA SIGNED GAME USED BAT BECKETT COA) was sold in April 2020 for $399.00 while the cheapest item (Dave Kingman Signed Baseball Card) found a new owner for $0.01 in September 2014. The month with the most items sold (26) was March 2008 with an average selling price of $13.50 for an autographed item of Dave Kingman. Sold items reached their highest average selling price in December 2015 with $37.50 and the month that saw the lowest prices with $0.99 was October 2009. In average, an autographed item from Dave Kingman is worth $10.00.

Most recently, these items with a signature of Dave Kingman were sold on eBay - click here for more items.

Kingman Photo | Joy to the World (12/06/18): The home of David and Marilyn Preston at 661 Shadow Mountain Drive is decorated with more than 350,000 Christmas lights this year, including a backyard display new to the extravagant set-up that was featured on ABC’s “Great Christmas Light Fight” in 2016. One special addition is a 22-foot pixel tree

A's slugger Dave Kingman should show more regret (06/23/11): A few days ago I saw a nice little story about Dave Kingman, former slugger for several major-league baseball teams, lastly the Oakland A's in 1986. Kingman hit 35 home runs that year but could not get a job the next....

Former Giants, A's slugger Dave Kingman still can connect (06/19/11): Kingman, who played for the Giants and A's, is a hit during minor league team's promotion

Father's Day/Dave Kingman Celebration highlights homestand (06/13/11): STOCKTON, Calif.-After a quick weekend road trip, the Stockton Ports return home for another seven-game homestand starting on Monday, June 13. The Ports will face off against the High Desert Mavericks and the Rancho Cucamonga Quakes for the first time this season.