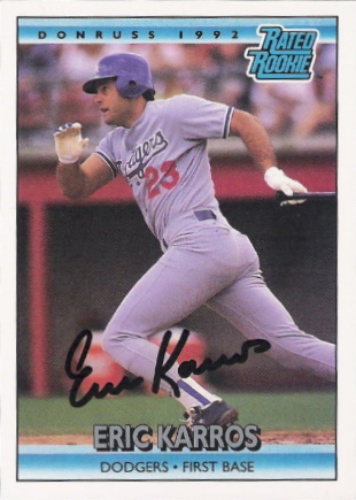 Eric Peter Karros (born November 4, 1967) is an American former professional baseball first baseman. Karros played in Major League Baseball (MLB) from 1991 to 2004 for the Los Angeles Dodgers, Chicago Cubs, and Oakland Athletics. He was the National League Rookie of the Year in 1992 and won a Silver Slugger Award in 1995. Karros currently works as a sportscaster, covering the Dodgers on Spectrum SportsNet LA. More about Eric Karros

Current items with a signature of Eric Karros

These are the most current items with a signature of Eric Karros that were listed on eBay and on other online stores - click here for more items.

Traded items with a signature of Eric Karros

If you're interested in Eric Karros Rookie cards you might want to take a look at our sister site that specializes in Baseball Rookie Cards only.

The most expensive item with a signature of Eric Karros (Eric Karros Signed Los Angeles Dodgers Bobblehead PSA AK64921) was sold in June 2022 for $299.95 while the cheapest item (Eric Karros signed autographed 8x10 photo DODGERS) found a new owner for $0.01 in November 2009. The month with the most items sold (15) was February 2008 with an average selling price of $4.99 for an autographed item of Eric Karros. Sold items reached their highest average selling price in October 2016 with $139.97 and the month that saw the lowest prices with $0.99 was December 2018. In average, an autographed item from Eric Karros is worth $9.50.

Most recently, these items with a signature of Eric Karros were sold on eBay - click here for more items.

MLB Analyst Eric Karros Talks Oakland’s Playoff Chances (09/19/13): FOX Broadcaster, Eric Karros, joined Jason Ross and talked about the Oakland Athletics chances in the playoffs and their pursuit of their first World Series appearance since 1990. Eric also talked about what it takes […]

Fox Sports’ Eric Karros Recaps The Giants World Series Sweep (10/29/12): Former MLB player Eric Karros, of Fox Sports, came on the show with Grant to recap the World Series. Karros talked about the dominance of the Giants’ pitching this postseason, the effect that Justin Verlander’s [...]

Eric Karros Discusses Changes Needed For Second Half Of MLB Season (07/2012): Fox Sports’ Eric Karros was on with Jason today to talk about the second half of the MLB season. Eric first discussed what the Los Angeles Dodgers need to do in terms of making the [...]

UCLA baseball alum Eric Karros honored at Dodger Stadium (06/2012): Daily Bruin Sports blog checking in on the Bruins, bringing you news from around the Web and following the games as they happen live.

FOX Announcers Thom Brennaman and Eric Karros Are Bad at This Viral Marketing Th (05/2011): Some thoughts on Fox's attempt at viral marketing at MLB games over the weekend.