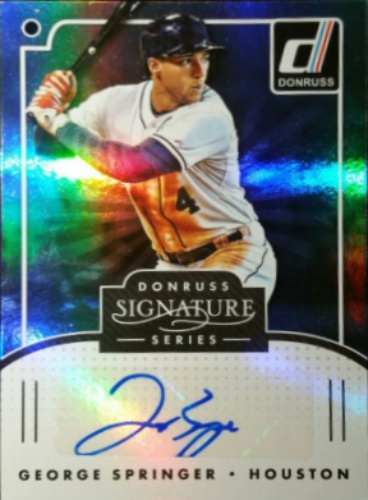 George Chelston Springer III (born September 19, 1989) is an American professional baseball outfielder for the Toronto Blue Jays of Major League Baseball (MLB). He played for the Houston Astros from 2014 to 2020. More about George Springer

Current items with a signature of George Springer

These are the most current items with a signature of George Springer that were listed on eBay and on other online stores - click here for more items.

Traded items with a signature of George Springer

If you're interested in George Springer Rookie cards you might want to take a look at our sister site that specializes in Baseball Rookie Cards only.

Most recently, these items with a signature of George Springer were sold on eBay - click here for more items.

Jays CF Springer 'doing OK' after outfield collision (10/09/22): Toronto center fielder George Springer was carted off the field after he collided with shortstop Bo Bichette in the eighth inning of the Blue Jays' 10-9 loss to the Seattle Mariners in Game 2 on Saturday.

Slugger Springer back from IL as Blue Jays' DH (08/16/22): Blue Jays outfielder George Springer was activated off the injured list and he was in the team's lineup against the Orioles as the designated hitter.

Springer out of All-Star Game; AL adds Seager (07/2022): Blue Jays center fielder George Springer has decided to not play in the All-Star Game so he can rest his right elbow. Rangers shortstop Corey Seager has been added to the American League roster in his place.

Blue Jays' George Springer leaves game vs. Rays after spraining ankle on catch a (05/2022): Springer was replaced in the lineup with Raimel Tapia

Blue Jays' Springer (knee) lands on IL a 3rd time (08/2021): The Blue Jays on Tuesday placed outfielder George Springer on the 10-day injured list with a sprained left knee he injured during the Blue Jays' weekend series with the Mariners in Seattle.

Jays' Springer back, set 'to play as hard as I can' (06/2021): Saying that he finally feels "like myself," three-time All-Star outfielder George Springer returned to the Toronto Blue Jays' lineup Tuesday night for only his fifth game this year.

'Frustrated' Springer likely out more than 10 days (05/2021): George Springer, who returned to the IL on Wednesday after aggravating his strained right quadriceps, is "frustrated," GM Ross Atkins said, and likely will be out longer than 10 days.

Springer to make Blue Jays debut as DH vs. Nats (04/2021): George Springer, saying he was "sick and tired of being on the IL" with a strained oblique and a right quad strain, will make his Blue Jays debut vs. the Nationals on Wednesday.

Blue Jays 2021 season preview: Projected lineup, rotation and three questions as (03/2021): Toronto is looking build upon a bounce-back season in 2020

Springer: Echoes of Astros in Jays' young core (01/2021): New Blue Jays star George Springer said Wednesday that he thinks Toronto's promising young core is similar to the group he played with that led Houston to its first World Series title in 2017.

MLB rumors: Blue Jays and Mets are in on George Springer; are the Cubs really co (12/2020): Here's the latest from the MLB hot stove

MLB free agency: Full list of 147 players on the market, including J.T. Realmuto (10/2020): Free agents can begin signing with new teams next week

Astros' Springer heckled during boobird swing (02/2020): The boobird swing continued for the Houston Astros during Wednesday's game against the New York Mets in Port St. Lucie, Florida. George Springer received the brunt of the heckling, but said he's not focusing on the fans while at the plate.

Altuve, Astros show up in World Series, win Game 3 in DC 4-1 (10/2019): From the moment George Springer jumped on the game's third pitch for a single, then quickly swiped a base, to the way he and his teammates sprinted off the field after the final out a little past midnight Saturday, the Houston Astros were suddenly aggressive and energetic. Yes, the Fall Classic

Quadriceps injury shuts down Astros rookie slugger George Springer (07/2014): Springer got off to a slow start following his mid-April call-up and his strikeout total leads the league, but he's smacked 20 homers with a .900 OPS in 61 games since early May to rank as one of the league's better all-around players during that span.

George Springer Making Transition From UConn To Minors (06/2012): The path from draft day to the major leagues is long and arduous, even for a first-round pick. But there are nights, moments, when a quantum leap seems to be made.