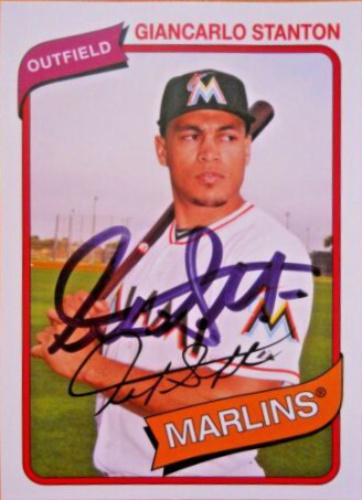 Giancarlo Cruz-Michael Stanton (born November 8, 1989), formerly known as Mike Stanton, is an American professional baseball designated hitter and outfielder for the New York Yankees of Major League Baseball (MLB). He made his MLB debut in 2010 as a member of the then-Florida Marlins, with whom he played until the end of the 2017 season. Stanton has twice led the National League (NL) in home runs; he hit 59 home runs in 2017, the most in 16 years. Known for his prodigious physical strength and ability to regularly hit long home runs, Stanton stands 6 feet 6 inches (1.98 m) tall and weighs 245 pounds (111 kg). He bats and throws right-handed. More about Giancarlo Stanton

Current items with a signature of Giancarlo Stanton

These are the most current items with a signature of Giancarlo Stanton that were listed on eBay and on other online stores - click here for more items.

Traded items with a signature of Giancarlo Stanton

If you're interested in Giancarlo Stanton Rookie cards you might want to take a look at our sister site that specializes in Baseball Rookie Cards only.

Most recently, these items with a signature of Giancarlo Stanton were sold on eBay - click here for more items.

Yankees Beat Guardians in Game 5, Advancing to ALCS (10/18/22): Giancarlo Stanton and Aaron Judge gave the Yankees an early lead in Game 5 of their division series and Nestor Cortes and the bullpen made it last. Next up: the Houston Astros.

Guardians' pitching decision backfires vs. Yankees as Aaron Civale serves up thr (10/18/22): Cleveland stuck with Civale in the winner-take-all Game 5; he got one out and gave up three runs

Yanks expect LeMahieu back Friday for O's series (09/29/22): Yankees infielder DJ LeMahieu is expected to be activated off the injured list before Friday's series opener against Baltimore. Also, manager Aaron Boone said Wednesday that Giancarlo Stanton is not expected to return to the outfield in the postseason.

Sizzling Yankees get stronger as Stanton returns (06/2022): Giancarlo Stanton, who has 11 home runs and 35 RBIs this season, has returned to the Yankees lineup after time on the injured list for right ankle inflammation.

For the Yankees, a Tough Stretch Starts With a Slew of Injuries (05/2022): A series against the rival Tampa Bay Rays will be played without Giancarlo Stanton, Aroldis Chapman and several other key players.

Yankees radio broadcaster John Sterling mistakenly calls Giancarlo Stanton flyou (04/2022): 'It is high! It is far! It is gone! ... but caught'

Giancarlo Stanton's monster performance might have been the best series in Yanke (09/2021): Stanton drove in more runs than Boston scored across a crucial three-game sweep for New York

Giancarlo Stanton homers twice, ties career-high with five RBI as Yankees top Tw (06/2021): Stanton had not driven in five runs in a game since joining Yanks in 2018

Yankees reinstate slugger Giancarlo Stanton from injured list (05/2021): Stanton has been on the shelf since May 13

MLB free agency: How opt-out clauses became no-brainers for players to decline (11/2020): When Giancarlo Stanton and J.D. Martinez signed, there was a good chance they'd opt out... then 2020 happened

MLB playoffs: Giancarlo Stanton's two-homer game features 458-foot laser, puts h (10/2020): Stanton joined Gehrig and Jackson... then followed it up with a bang in his next at-bat

Yankees' Giancarlo Stanton not expected to opt out of massive contract, per repo (09/2020): Stanton has at least $218 million owed to him through the 2027 season

Yanks' Stanton 'disappointed' over latest injury (08/2020): Yankees star Giancarlo Stanton said Monday that he shares fans' disappointment after he landed on the injured list again, this time with a hamstring strain.

MLB Buy or Sell: Yankees' Giancarlo Stanton primed for rebound; Angels' Shohei O (07/2020): Should we buy into Stanton's hot start through three games? What about the Padres -- are they for real?

Yankees' Giancarlo Stanton suffers calf strain, could be out for Opening Day (02/2020): It's already been a rough spring for Yankee injuries

Yankees vs. Astros: Giancarlo Stanton out of New York's lineup for ALCS Game 6 (10/2019): Stanton got the start in Friday night's Game 5

Bryce Harper To The New York Yankees Won't Happen, Raising The Pressure On Gianc (02/2019): With the Yankees deciding not to pursue Bryce Harper, Giancarlo Stanton faces a ton of pressure in 2019.

What Is Giancarlo Stanton Thinking? (03/2015): Coming off his best season and a devastating fastball to the face, the game's most powerful hitter surprised everyone by signing a $325 million deal to work for a notoriously unreliable owner.

Giancarlo Stanton was 'angered' over $325M offer (02/2015): © Marc Serota/Getty Images Giancarlo Stanton was initially upset over the Marlins' $325 million offer. First world problems right here. "I think they were thinking I was going to be like, ‘Oh, well, sign me up!'” Stanton told Reiter.

Inside The Details Of Giancarlo Stanton's Mega-Contract With Marlins (11/2014): By now, you've heard that the Miami Marlins have inked Giancarlo Stanton to the richest contract in sports history. But, when you look at how the $325 million deal is structured, plus award bonuses, it could amount to even more still. Here's all the details

Giancarlo Stanton Finds New Perspective On Life After Scary Beanball (10/2014): Giancarlo Stanton’s career flashed before his eyes. Stanton was struck in the face by a...

Giancarlo Stanton is clobbering the ball (04/2014): Miami Marlins outfielder is chasing more pitches but leads the league in RBIs

Giancarlo Stanton, Marlins not discussing contract extension (01/2014): Stanton, 24, came to terms with the club on a one-year, $6.5 million deal to avoid the arbitration panel, but the two sides haven't begun negotiating a contract extension that would keep Stanton in Miami beyond 2016 -- his last year of arbitration eligibility.

Phillies relentless in pursuit of Giancarlo Stanton, according to report (10/2013): It's hard to blame Amaro Jr. for being persistent in his pursuit of Stanton, as he is considered one of the best young outfielders in the game.

Giancarlo Stanton expected to remain with Marlins (09/2013): Loading... Any industry insider told Frisaro that he doesn't "see any scenario" where the Marlins part ways with their slugger. Any source added that the Marlins want to build around Stanton, not trade him away.

Giancarlo Stanton does the "Single Ladies" dance (08/2013): Get the latest Sports Wrap Up newsletter delivered to your email. Sign up now!