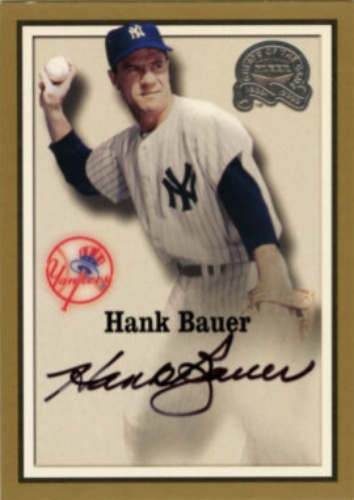 Henry Albert Bauer (July 31, 1922 – February 9, 2007) was an American right fielder and manager in Major League Baseball. He played with the New York Yankees (1948–1959) and Kansas City Athletics (1960–1961); he batted and threw right-handed. He served as the manager of the Athletics in both Kansas City (1961–62) and in Oakland (1969), as well as the Baltimore Orioles (1964–68), guiding the Orioles to the World Series title in 1966, a four-game sweep over the heavily favored Los Angeles Dodgers. This represented the first World Series title in the franchise's history. More about Hank Bauer

Current items with a signature of Hank Bauer

These are the most current items with a signature of Hank Bauer that were listed on eBay and on other online stores - click here for more items.

Traded items with a signature of Hank Bauer

If you're interested in Hank Bauer Rookie cards you might want to take a look at our sister site that specializes in Baseball Rookie Cards only.

The most expensive item with a signature of Hank Bauer (6 CUT AUTO HANK BAUER FRANK BROOKS ROBINSON PALM SP LEGENDARY SIGNATURE CUTS 1/1) was sold in February 2022 for $799.99 while the cheapest item (Hank Bauer signed 3x5) found a new owner for $0.59 in September 2008. The month with the most items sold (23) was May 2008 with an average selling price of $14.99 for an autographed item of Hank Bauer. Sold items reached their highest average selling price in December 2015 with $35.23 and the month that saw the lowest prices with $3.75 was June 2019. In average, an autographed item from Hank Bauer is worth $11.58.

Most recently, these items with a signature of Hank Bauer were sold on eBay - click here for more items.

Football Announcer Hank Bauer Suspended for Jewish Joke (08/28/14): San Diego Chargers radio analyst Hank Bauer was suspended from announcing the team’s final preseason game for invoking a Jewish stereotype in an exchange with his on-air colleague. Click here for the rest of the article...

Pulse of The People: Harry Tutunjian and Hank Bauer call on county to stay withi (09/2012): Nearly two years ago, New York state approved legislation requiring municipalities to comply with a 2 percent property tax cap. The tax cap was implemented in reaction to our state having one of the highest tax burdens in the entire country.