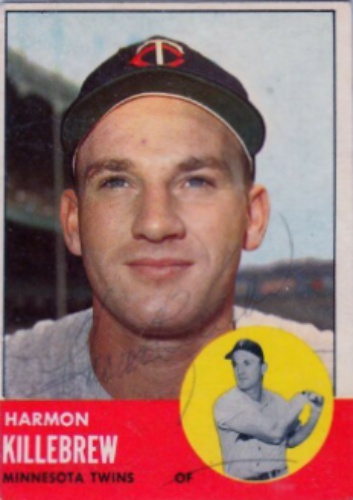 Harmon Clayton Killebrew Jr. (/ˈkɪlɪbruː/; June 29, 1936 – May 17, 2011), nicknamed "The Killer" and "Hammerin' Harmon", was an American professional baseball first baseman, third baseman, and left fielder. He was a prolific power hitter who spent most of his 22-year career in Major League Baseball with the Minnesota Twins. At the time of his retirement Killebrew had the fifth-most home runs in major league history. He was second only to Babe Ruth in American League (AL) home runs, and was the AL career leader in home runs by a right-handed batter. Killebrew was inducted into the National Baseball Hall of Fame in 1984. More about Harmon Killebrew

Current items with a signature of Harmon Killebrew

These are the most current items with a signature of Harmon Killebrew that were listed on eBay and on other online stores - click here for more items.

Traded items with a signature of Harmon Killebrew

If you're interested in Harmon Killebrew Rookie cards you might want to take a look at our sister site that specializes in Baseball Rookie Cards only.

Most recently, these items with a signature of Harmon Killebrew were sold on eBay - click here for more items.

MLB Hall Of Fame Committee To Vote On Old-Timers For Induction Into Cooperstown (12/06/18): The Eras Committee, a 16-member board formerly known as the Veterans Committee, will consider 10 men, who are no longer eligible for election by the Baseball Writers' Association of America, to be elected to the Hall of Fame.

1971 Major League Baseball All-Star Game (07/05/16): The 1971 Major League Baseball All-Star Game , the 42nd such game, was played on July 13, 1971. The all-stars from the American League and the National League faced each other at Tiger Stadium, home of the Detroit Tigers. The American League won by a score of 6–4. This was the third ti

10 Interesting Facts About Harmon Killebrew (06/2014): Harmon Killebrew was one of the best baseall players in the history of the sport. Here are 10 interesting facts about him. Contributor: Tom Harrington Published: Jun 13, 2014

Scotch Pines wins inaugural Walter Johnson vs. Harmon Killebrew Challenge (08/2013): One of golf’s most intriguing formats has made its way to the Western Treasure Valley. Over the past two weeks members from Weiser’s Rolling Hills Golf Course and Payette’s Scotch Pines Golf Course pa

Valuable Minnesota memorabilia: Harmon Killebrew's autograph, Millers jerseys (04/2013): On and on ... George Johnson has been collecting baseball cards since he was a child. Back then, nearly half a century ago, he never

Minneapolis re-dedicates ballpark to Harmon Killebrew (08/2012): On a warm summer night, there's nothing better than watching the boys of summer play ball -- and one renovated field of dreams is adopting the name of a local legend.

Hall of Famer Harmon Killebrew, 74, dies of cancer (08/2011): MINNEAPOLIS (AP) -- Harmon Killebrew, the affable, big-swinging Hall of Famer whose tape-measure home runs made him the cornerstone of the Minnesota Twins and perhaps the most popular player in the team's 51-year history, died Tuesday after battling esophageal cancer. He was 74.

Harmon Killebrew Field Opens in Lakeville (06/2011): Harmon Killebrew's legend lives on through a baseball filed built for kids who otherwise, could not play the game he loved...

Harmon Killebrew's little-known role in Mariners history (05/2011): Upon his death last week, Hall of Famer Harmon Killebrew was rightly lauded for numerous accomplishments on and off the baseball field.

By The Numbers: The Forgotten Slugger – Harmon Killebrew (04/2011): Let’s not forget a great slugger from the past – who coincidentally wore number 3, the same number as The Bambino – Harmon Clayton Killebrew.