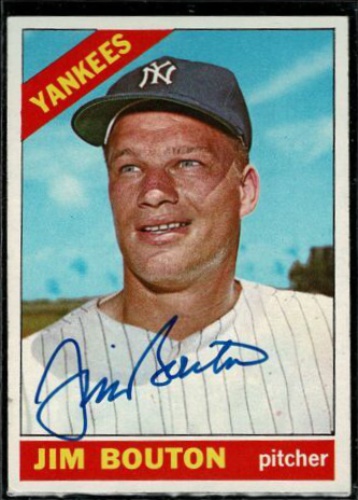 James Alan Bouton (/ˈbaʊtn/; March 8, 1939 – July 10, 2019) was an American professional baseball player. Bouton played in Major League Baseball (MLB) as a pitcher for the New York Yankees, Seattle Pilots, Houston Astros, and Atlanta Braves between 1962 and 1978. He was also a best-selling author, actor, activist, sportscaster and one of the creators of Big League Chew. More about Jim Bouton

Current items with a signature of Jim Bouton

These are the most current items with a signature of Jim Bouton that were listed on eBay and on other online stores - click here for more items.

Traded items with a signature of Jim Bouton

If you're interested in Jim Bouton Rookie cards you might want to take a look at our sister site that specializes in Baseball Rookie Cards only.

The most expensive item with a signature of Jim Bouton (Vintage Jim Bouton Yankees Signed Spalding 42-213 Model Glove AUTO JSA COA) was sold in January 2012 for $361.00 while the cheapest item (NYY Jim Bouton Auto Signed 3x5 Index Card JSA SOA) found a new owner for $0.10 in July 2009. The month with the most items sold (69) was July 2019 with an average selling price of $29.99 for an autographed item of Jim Bouton. Sold items reached their highest average selling price in April 2018 with $89.00 and the month that saw the lowest prices with $1.72 was October 2014. In average, an autographed item from Jim Bouton is worth $9.99.

Most recently, these items with a signature of Jim Bouton were sold on eBay - click here for more items.

Jim Bouton’s dad is mourned (12/27/14): A memorial service for the former Yankee pitcher's father will be held in Emerson.

Jim Bouton Plays Not My Job (08/08/14): The former Yankees pitcher tells us the secrets of the locker room. (This segment originally broadcast on April 14, 2012.)

Ball Four by Jim Bouton is the Best Audio Book Ever (06/08/12): The book Ball Four isn’t about affiliate marketing , but it is about marching to a different drummer and challenging yourself. So, in that respect, it i s something of a mirror for affiliate marketers.

Former Yankees Pitcher Jim Bouton Plays Not My Job (04/2012): Bouton's classic baseball memoir Ball Four , first published in 1970, is just out as an e-book. Bouton famously wrote about shenanigans in baseball, but compared to other sports, baseball players are hardly immoral at all. We're going to ask him about people who really know how to cheat.

VIDEO: American Idol's William Hung, Yankees legend Jim Bouton among the attract (07/2011): TORRINGTON — It was not a typical night at Fuessenich Park.

Titans, Tri-State Bringing in William Hung and Jim Bouton for Fourth of July Fes (04/2011): TORRINGTON — In an interesting twist to an American tradition of baseball on the Fourth of July, the Torrington Titans are bringing in a special guest.