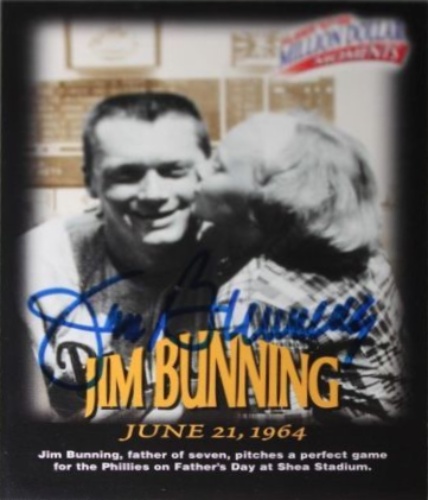 James Paul David Bunning (October 23, 1931 – May 26, 2017) was an American professional baseball pitcher and politician who represented Kentucky in both chambers of the United States Congress. He was the sole Major League Baseball athlete to have been elected to both the United States Senate and the National Baseball Hall of Fame. More about Jim Bunning

Current items with a signature of Jim Bunning

These are the most current items with a signature of Jim Bunning that were listed on eBay and on other online stores - click here for more items.

Traded items with a signature of Jim Bunning

If you're interested in Jim Bunning Rookie cards you might want to take a look at our sister site that specializes in Baseball Rookie Cards only.

Most recently, these items with a signature of Jim Bunning were sold on eBay - click here for more items.

50 years later: Jim Bunning's Father's Day perfect game (06/22/14): Jim Bunning is the father of nine children, so why wouldn't it be the Hall of Famer to do something extraordinary on Father's Day?

Jim Bunning doesn’t like how Major League Baseball shut Mark Cuban out of the ow (06/21/14): He seems to have really wanted this man to own the Cubs.

Jim Bunning made Father's Day perfect (06/14/14): Phillies pitcher Jim Bunning gave fans a game to remember in 1964. June 1964: Jim Bunning was a 32-year-old father of seven. He was also the pitching ace of the upstart Philadelphia Phillies.

Promo Preview: Jim Bunning to be Celebrated on June 12 (02/2014): On February 13th, the Reading Fightin Phils will announce their full promotional schedule for the 2014 season in conjunction with the first day of individual ticket sales.

GOP Leader Mitch McConnell praises former Sen. Jim Bunning for willingness to st (09/2013): HIGHLAND HEIGHTS, Ky. — Some three years after helping to push baseball Hall-of-Famer Jim Bunning out of the U.S. Senate, Republican Leader Mitch McConnell is singing his praises as a political leader who wasn't afraid to stand up for his beliefs in Washington, even when it meant standing alone.

Jim Bunning gives to NKU (11/2011): Jim Bunning, the former U.S. Senator from Southgate, stressed the importance of a college education during a banquet celebrating his donation of his Congressional papers and some baseball memorabilia to Northern Kentucky University.