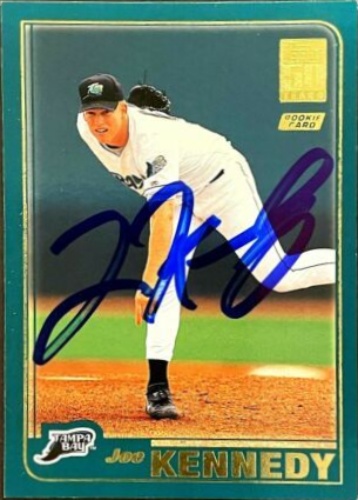 Joseph Patrick Kennedy (September 6, 1888 – November 18, 1969) was a prominent American businessman, investor and politician. He is known for his own political prominence as well as that of his children and was the patriarch of the Irish-American Kennedy family, which included President John F. Kennedy, Attorney General and Senator Robert F. Kennedy, and longtime Senator Edward M. "Ted" Kennedy. More about Joe Kennedy

Current items with a signature of Joe Kennedy

These are the most current items with a signature of Joe Kennedy that were listed on eBay and on other online stores - click here for more items.

Traded items with a signature of Joe Kennedy

The most expensive item with a signature of Joe Kennedy (KENNEDY CLAN AUTHENTIC SIGNED FIRST DAY COVERS-JOE KENNEDY,ROSE, RFK, TED, JACKIE+7) was sold in May 2015 for $234.50 while the cheapest item (2002 Donruss Studio #184 Joe Kennedy signed/autographed card Devil Rays) found a new owner for $0.01 in October 2013. The month with the most items sold (5) was May 2008 with an average selling price of $5.99 for an autographed item of Joe Kennedy. Sold items reached their highest average selling price in March 2013 with $202.50 and the month that saw the lowest prices with $0.01 was October 2013. In average, an autographed item from Joe Kennedy is worth $7.48.

Most recently, these items with a signature of Joe Kennedy were sold on eBay - click here for more items.

Rep. Joe Kennedy Appointed To Energy And Commerce Committee (01/10/15): Kennedy will serve on the Health; Commerce, Manufacturing and Trade; and Oversight and Investigations subcommittees.

AP Interview: Joe Kennedy reflects on first House term, bats down talk of politi (01/01/15): BOSTON — U.S. Rep. Joe Kennedy is wrapping up his first term in Congress, saying he remains committed to the bread and butter of local constituent services while batting down talk of future higher office.

Joe Mathieu Talks To The Candidates: Rep. Joe Kennedy On ISIS Response (09/2014): U.S. Rep. Joseph Kennedy told WBZ's Joe Mathieu that Congress has an obligation and a responsibility to weigh in on airstrikes and any other military action against ISIS terrorists in Syria.

Joe Kennedy: Faith is a blessing amid cancer fight (07/2014): Two years ago, I wrote an article about my 8-year-old granddaughter Kayla, who had just been diagnosed with leukemia. We were devastated. Well, thank God, she recently celebrated her 11th birthday.

Joe Kennedy III gets great-uncle Ted’s diploma (05/2014): When U.S. Rep. Joseph Kennedy III agreed to deliver a commencement addresses at the University of Virginia Law School, he didn’t realize he’d be receiving a diploma too.