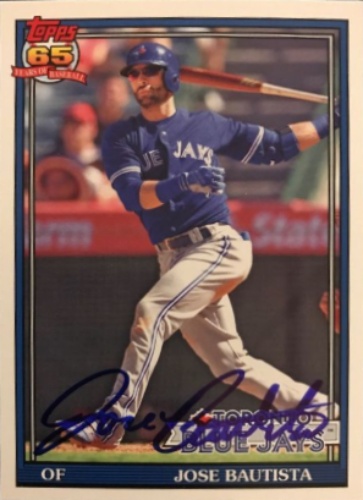 Current items with a signature of Jose Bautista

These are the most current items with a signature of Jose Bautista that were listed on eBay and on other online stores - click here for more items.

Traded items with a signature of Jose Bautista

The most expensive item with a signature of Jose Bautista (Jose Bautista Signed Toronto Blue Jays Canada Jersey) was sold in November 2011 for $500.00 while the cheapest item (Jose Bautista Blue Jays Pirates Signed Card VALUABLE!!) found a new owner for $0.75 in November 2010. The month with the most items sold (47) was July 2011 with an average selling price of $49.99 for an autographed item of Jose Bautista. Sold items reached their highest average selling price in April 2018 with $224.99 and the month that saw the lowest prices with $0.99 was February 2010. In average, an autographed item from Jose Bautista is worth $34.36.

Most recently, these items with a signature of Jose Bautista were sold on eBay - click here for more items.

Olympic baseball rosters: José Bautista, Melky Cabrera playing for Dominican; Ju (05/26/21): Bautista and Cabrera will be suiting up for the Dominican Republic in next week's qualifying round

MLB free agent Jose Bautista shows off his pitching form in continued attempt to (04/07/20): The six-time MLB All-Star hopes to return to the league this season

Sources: D.R. adds Franco for Olympic qualifying (03/02/20): The Dominican Republic is adding No. 1 overall prospect Wander Franco and veteran slugger Jose Bautista to its roster as it attempts to qualify for the Olympics.

Did the Toronto Blue Jays have a clubhouse problem? Jose Bautista says no, but R (01/2015): R.A. Dickey's answers did not quite match Jose Bautista’s

Jose Bautista Sons Hack Columnist On Twitter (10/2014): Toronto Sun sports columnist Steve Simmons is known as a bit of a curmudgeon and a troll in the world of Canadian sports media, so a lot of people will be happy to learn that he got his ass handed to him by Blue Jays star Jose Bautista on Twitter today. Read more...

Toronto Blue Jays’ can ‘keep getting better’ thanks to young players: Jose Bauti (09/2014): Bautista enjoyed one of his best years

Toronto Blue Jays’ Jose Bautista among players understandably critical of team’s (07/2014): In the aftermath of one of the most dynamic deadline days in history, some players were feeling a tad betrayed

Jose Bautista on facing Masahiro Tanaka: Not 'that much special' (03/2014): Toronto slugger not excited for Japanese star's first big-league start

Jose Bautista leads Jays past Phillies in spring training (02/2014): Jose Bautista kept up his torrid start to the spring, hitting two doubles and driving in two runs Thursday that sent the Toronto Blue Jays over the Philadelphia Phillies 7-5.

Blair: Rumoured deal for Jose Bautista makes no sense, yet (11/2013): The Jays slugger has a team-friendly contract that makes him a valuable asset to Toronto, but does GM Alex Anthopoulos have the patience to wait until Bautista suddenly becomes worth more to somebody else than he is to the Jays

Blue Jays’ Jose Bautista done for the season with hip injury (09/2013): On the advice of a New York hip specialist, the Toronto Blue Jays slugger was shut down with a bone bruise in his left hip

Jose Bautista injury: Blue Jays star placed on 15-day DL (08/2013): The injury occurred when Bautista made a sliding catch. Toronto initially had removed Bautista early from the first game of Tuesday's double-header against the Yankees and listed him as "game-to-game."

Jose Bautista teaches his former Blue Jays coach a lesson (06/2013): Red Sox third base coach Brian Butterfield considers Toronto right fielder Jose Bautista one of his all-time favorite players to coach. And it’s no wonder. When he’s on, Bautista is one of the best all-around players in baseball. Saturday afternoon, Bautista did it all.

Jose Bautista homers twice as Blue Jays beat Rays, plus more AL scores (05/2013): Jose Bautista homered twice and drove in the winning run with a 10th-inning single, leading the Toronto Blue Jays to a 4-3 victory over the Tampa Bay Rays on Wednesday.

Jose Bautista’s return means little in Yankees rout of Blue Jays (04/2013): Jose Bautista returned from a four-game absence caused by back spasms on Friday, in time for the Blue Jays’ 9-4 loss to the New York Yankees

Blue Jays’ Jose Bautista cheers from afar as Dominican team wins WBC (03/2013): Jose Bautista has spent the past six weeks in Florida, but on Tuesday night he left his heart in San Francisco

Blue Jays' Jose Bautista pitches managers (10/2012): What qualities should the next Blue Jays manager have? Someone with ...

Jose Bautista making quick progress, closer to return (07/2012): Injured Blue Jays slugger Jose Bautista is recovering more quickly than expected from his sore left wrist and could be swinging a bat and hitting off the tee soon.

Griffin: Blue Jays’ Jose Bautista heating up with weather (05/2012): Home run king puts fans' minds at ease with home run surge. The way slugger sees it, the reason for the resurgence is clear.

Tao of Stieb: 30 Jays in 30 Days - Jose Bautista (03/2012): Jose Bautista has evolved from a handy utility man into a transcendent star, could he break through and win the AL MVP Award this season?

HBT: Jose Bautista's OK with all the drug tests (01/2012): “Moneyball” was nominated for several Academy Awards, and over at the website Buzzsugar, they give some advice on how to throw a “Moneyball”-themed Oscar party. The upshot: Serve beer and peanuts! Wear baseball jerseys! Decorate the room with gloves, caps and memorabilia!

Bats: Can Jose Bautista Sneak Away With the M.V.P.? (11/2011): Who will emerge from a crowded field to win the A.L. Most Valuable Player award?

Jose Bautista Ejected After Tirade At Umpire (08/2011): TORONTO -- First, Jose Bautista made sure he had umpire Bill Welke's attention. Then he got tossed for a profane tirade. Finally, he said goodbye by throwing his equipment on the field.

Jose Bautista bigger than our backyard (07/2011): It's easy to think about Jose Bautista as the local phenomenon.

Jose Bautista: Blue Jays Home Run Slugger Remains Unknown (05/2011): You probably don't know much, if anything, about Jose Bautista of the Toronto Blue Jays, who has smacked 73 home runs since the start of last season. What does this say about baseball?