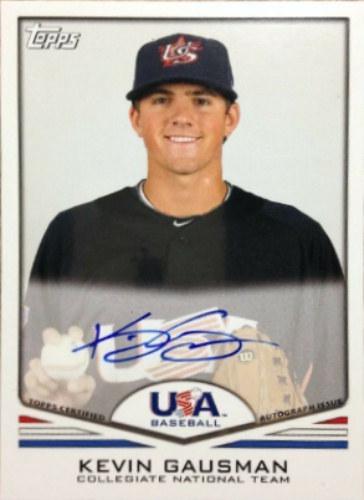 Kevin John Gausman (born January 6, 1991), nicknamed "Gaus", is an American professional baseball pitcher for the Toronto Blue Jays of Major League Baseball (MLB). He previously played for the Baltimore Orioles, Atlanta Braves, Cincinnati Reds, and San Francisco Giants. Before his professional career, Gausman attended Louisiana State University (LSU) and played college baseball for the LSU Tigers, with whom he was an All-American. The Orioles selected him in the first round (4th overall) of the 2012 MLB draft. He made his MLB debut in 2013. He was an All Star in 2021. More about Kevin Gausman

Current items with a signature of Kevin Gausman

These are the most current items with a signature of Kevin Gausman that were listed on eBay and on other online stores - click here for more items.

Traded items with a signature of Kevin Gausman

Most recently, these items with a signature of Kevin Gausman were sold on eBay - click here for more items.

RHP Gausman leaves Jays' win with cut on finger (10/03/22): Toronto's Kevin Gausman left Sunday's start after three innings because of a cut on his right middle finger. The right-hander is in line to start Game 2 of a wild-card series next Saturday.

Red Sox's seven-game winning streak snapped by Blue Jays' power and starter Kevi (06/28/22): It's a big week for the Blue Jays and they started it off right

Kevin Gausman and Blue Jays' power display snap Red Sox's seven-game winning str (06/28/22): It's a big week for the Blue Jays and they started it off right

RHP Cobb reportedly nearing deal with Giants (11/2021): Alex Cobb would give the reigning NL West champion Giants a key veteran near the front of the rotation after the departure of All-Star righty Kevin Gausman to the Blue Jays on a $110 million, five-year contract.

Giants tap Webb for G1, Gausman for G2 of NLDS (10/2021): Logan Webb will start for the Giants in Game 1 of their National League Division Series, with Kevin Gausman taking the mound for Game 2.

Gausman returns to Giants, takes $18.9M offer (11/2020): Kevin Gausman is returning to the Giants for the 2021 season after accepting the team's $18.9 million qualifying offer Wednesday.

Kevin Gausman likely to start again Tuesday (03/2015): In case you were now sure that Kevin Gausman was headed to the bullpen for the regular season, hold that thought.

Kevin Gausman, Marco Gonzales make MLB playoff debuts (10/2014): Kevin Gausman #39 of the Baltimore Orioles throws a pitch in the fourth inning against the Detroit Tigers during Game Two of the American League Division Series at Oriole Park at Camden Yards on

Kevin Gausman optioned to Norfolk, Wieters catches bullpen, and other notes (05/2014): After a spot start in which he allowed five runs in four innings against Detroit on Wednesday, pitching prospect Kevin Gausman was sent back to Triple-A Norfolk on Thursday.

Blitz: Kevin Gausman, Mike Wright garnering attention in Norfolk (04/2014): There are no apparent slots in the Orioles starting rotation, but pitching prospects Kevin Gausman and Mike Wright are off to hot starts for Triple-A Norfolk.

Orioles RHP Kevin Gausman is leaving a lasting impression (03/2014): With all five rotation spots slotted and the bullpen not an option given his projected future as a front-line starter, Orioles right-hander Kevin Gausman likely will be heading soon to Triple-A.