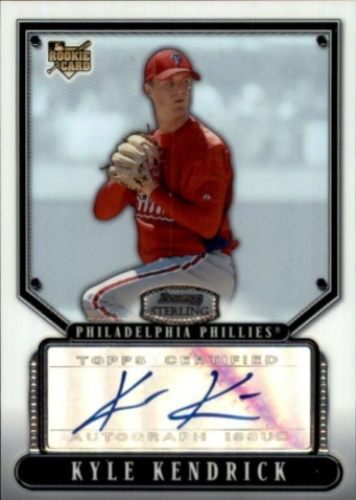 Current items with a signature of Kyle Kendrick

These are the most current items with a signature of Kyle Kendrick that were listed on eBay and on other online stores - click here for more items.

Traded items with a signature of Kyle Kendrick

The most expensive item with a signature of Kyle Kendrick (2008 rawlings world series baseball philadelphia phillies kyle kendrick signed) was sold in October 2016 for $79.99 while the cheapest item (KYLE KENDRICK SIGNED 8X10 PHILADELPHIA PHILLIES PHOTO) found a new owner for $0.01 in November 2011. The month with the most items sold (21) was October 2009 with an average selling price of $9.99 for an autographed item of Kyle Kendrick. Sold items reached their highest average selling price in October 2016 with $79.99 and the month that saw the lowest prices with $0.99 was September 2014. In average, an autographed item from Kyle Kendrick is worth $5.00.

Most recently, these items with a signature of Kyle Kendrick were sold on eBay - click here for more items.

Meet Jean Segura, the shortstop who hoodwinked Kyle Kendrick and an umpire (12/03/18): You may remember Jean Segura from a play that was actually pretty funny, once you pulled your fist out of the wall.

Former Phillie Kyle Kendrick will be the Colorado Rockies' Opening Day starter (03/19/15): For the most part, Philadelphia fans weren’t upset to see Kyle Kendrick and the Phillies part ways after last season, but it seems the right-hander is receiving a warm welcome in his new home – Colorado.

New Rockies pitcher Kyle Kendrick works out of trouble in debut (03/08/15): Kyle Kendrick wasn't thinking about damage control when he took the mound at Tempe Diablo Stadium on Friday to face the Los Angeles Angels.

Rockies pitcher Kyle Kendrick still has work to do (03/2015): TEMPE, Ariz. — Kyle Kendrick wasn't thinking about damage control when he took the mound at Tempe Diablo Stadium on Friday to face the Los Angeles Angels.

Kyle Kendrick getting interest from Twins (12/2014): Kyle Kendrick may have a new home this season. (Scott Cunningham/Getty Images)

Phillies stay or go: Kyle Kendrick (10/2014): Cast your vote on whether or not the Phillies should keep starting pitcher Kyle Kendrick.

VIDEO: Remember when Phillies' Kyle Kendrick, perhaps on move soon, was pranked (07/2014): Phillies pitcher Kyle Kendrick could be traded for real by July 31st, possibly to the Yankees, Orioles, Pirates or Blue Jays as a starter or to the Brewers or Tigers as a reliever.

Kyle Kendrick, bullpen falter as Phillies fall to Marlins (05/2014): Marcell Ozuna hit a grand slam and drove in five runs to help power the Miami Marlins past the Philadelphia Phillies 14-5 on Wednesday.

Phillies notes: Kyle Kendrick may be a steal this year (02/2014): Kyle Kendrick is earning $7.675 million on a one-year contract this season, the last time Kendrick will have to deal with the arbitration system. He'll become a free agent next offseason.

Happy Birthday, Kyle Kendrick (08/2013): Kyle has had a long and illustrious career, during which he has gone from golden boy, to weak link, to scapegoat, to weak link again, to scapegoat again, then back to golden boy for a little while until earlier this year , when he just started sort of blending in with the background.

Phillies, Kyle Kendrick throttled by San Francisco Giants (07/2013): The right-hander didn't make it out of the third inning as the Phillies lost for the ninth time in 10 games.

Have a night, Kyle Kendrick (06/2013): We may not have a magical baseball stadium that turns garbage into reusable baseball, but we do have Kyle Kendrick hitting a triple.

Inside the Phillies: After a stumble, Kyle Kendrick gets back on track (05/2013): The foundation of the Phillies is their pitching. It would have to be, of course, because if you tried to build something on top of this offense it would come crumbling down like a house of cards.

Phillies find their focus in Queens, down Mets behind shutout effort from Kyle K (04/2013): NEW YORK — The Phillies had lost their last three, four of their last six, eight of their last 11 and much, if not all, of their recent mystique as they arrived Friday at Citi Field.

Phillies Notes: Phillies' Kyle Kendrick can use spring to tinker (02/2013): CLEARWATER, Fla. - One of the upshots of Kyle Kendrick's being guaranteed a rotation spot this winter is the freedom of a spring without worries. The results of his Grapefruit League appearances are meaningless.

Kyle Kendrick pitches Phillies to win over Braves (09/2012): PHILADELPHIA - The Philadelphia Phillies did all their scoreboard watching before taking the field, and then...

Kyle Kendrick and six relievers scatter six hits in Philadelphia's 4-2 win over (08/2012): Jimmy Rollins drove in a pair of runs as Phillies won for the fifth time in the last seven games.

Phillies Notes: Kyle Kendrick ready to pitch in whatever role required (07/2012): Even as Kyle Kendrick has flourished this July with a scoreless streak of 182/3 innings, there are unfulfilled goals. Kendrick has started 111 games in the majors, but it is only through injuries to other Phillies arms that he finds himself in the starting rotation during the last two seasons.

Kyle Kendrick Remains Cursed While Police Continue Search for Stolen World Serie (04/2011): ​The good news is that Phillies pitcher and Washington native Kyle Kendrick was told yesterday that a fifth suspected burglar was arrested for the break-in into his Mount Vernon home in which wa