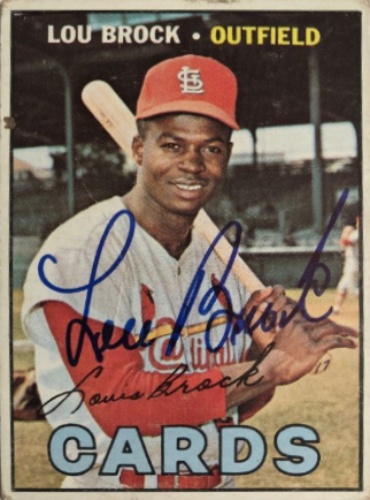 Current items with a signature of Lou Brock

These are the most current items with a signature of Lou Brock that were listed on eBay and on other online stores - click here for more items.

Traded items with a signature of Lou Brock

If you're interested in Lou Brock Rookie cards you might want to take a look at our sister site that specializes in Baseball Rookie Cards only.

Most recently, these items with a signature of Lou Brock were sold on eBay - click here for more items.

Lou Brock, St. Louis Cardinals legend and Baseball Hall of Famer, dies at 81 (09/07/20): Brock was known for his speed on the basepaths

Hall of Famer Brock, Cardinals legend, dies at 81 (09/07/20): Lou Brock, the St. Louis Cardinals' speedster who was a first-ballot member of Baseball's Hall of Fame, has died at 81, the team told ESPN.

Baseball Hall of Famer Lou Brock encourages others with diabetes “to manage it & (10/08/14): FRANKLIN (WITI) — He was a player who could do it all on the baseball diamond. Hitting, running, fielding — you name it, Lou Brock excelled at it. Now, the Hall of Famer is long past his playing days, but he’s still looking for that big hit. For 19 seasons, Lou Brock was able to […]

40 years ago, Lou Brock committed grand larceny (09/2014): Dan O'Neill looks back on the anniversary of the 'Base Burlgar' breaking the single-season steals record with No. 105.

John Lowe's Past Time: Exciting Lou Brock helped create this baseball fan (06/2014): The Cardinals' Lou Brock is tagged out at home plate by Bill Freehan of the Tigers in the fifth inning of Game 5 of the 1968 World Series at Tiger Stadium.

Cardinals legend Lou Brock talks World Series, Boston memories (10/2013): The Cardinals and Red Sox on Wednesday will meet up for the fourth time in the World Series, with the Redbirds winning two of those championships.

Lou Brock a FanFest favorite (07/2012): Lou Brock summoned 10-year-old Lou Fincher to help him answer a question supplied by his dad, Roger, about comparing base runners of different eras.

Hall-of-Famer, Lou Brock talks about Diabetes Awareness (03/2012): The St. Bernards Health & Wellness Institute played host to one of the most famous St. Louis Cardinals of all-time, Lou Brock.  But the Hall-of-Famer was visiting Region 8 to help spread a message of health.

Lou Brock the latest Cardinals great to enjoy 'Night' (01/2012): Lou Brock is part of a St. Louis Cardinals ' trilogy, a procession of Baseball Hall of Famers walking through the doors of the Vanderburgh 4-H Center serving as the featured guest for the annual Night of Memories.

Lou Brock will drum up World Series interest on the ' Today ' show (10/2011): REMEMBER THE BROCKABRELLA: None other than one of the greatest Cardinals of all time, Lou Brock, will be on the " Today " show tomorrow morning with the World Series trophy.

Ex-Cub, Cardinal Lou Brock Talks About Diabetes (04/2011): Baseball Hall of Famer Lou Brock is in the Chicago area Tuesday, visiting with patients at Advocate Christ Medical Center and talking about his battle with diabetes.