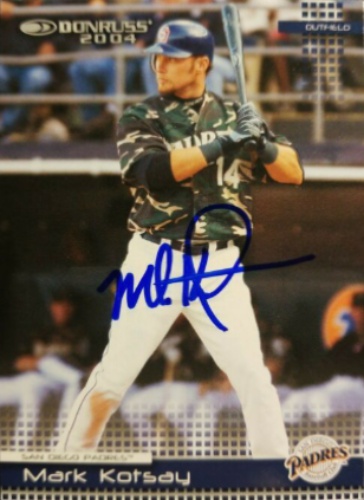 Mark Steven Kotsay (born December 2, 1975) is an American professional baseball manager and former outfielder. He is the manager for the Oakland Athletics of Major League Baseball (MLB). As a player, Kotsay appeared in 1,914 MLB games for the San Diego Padres, Florida Marlins, Athletics, Atlanta Braves, Boston Red Sox, Chicago White Sox, and Milwaukee Brewers. He coached for the Padres and Athletics before becoming manager of Oakland before the 2022 season. More about Mark Kotsay

Current items with a signature of Mark Kotsay

These are the most current items with a signature of Mark Kotsay that were listed on eBay and on other online stores - click here for more items.

Traded items with a signature of Mark Kotsay

The most expensive item with a signature of Mark Kotsay (MARK KOTSAY OAKLAND A'S Original SIGNED AUTOGRAPHED GAME WORN Baseball JERSEY) was sold in October 2021 for $195.00 while the cheapest item (Autographed Mark Kotsay 2000 Fleer Tradition Marlins) found a new owner for $0.01 in May 2020. The month with the most items sold (15) was October 2008 with an average selling price of $11.00 for an autographed item of Mark Kotsay. Sold items reached their highest average selling price in July 2016 with $53.00 and the month that saw the lowest prices with $0.10 was April 2015. In average, an autographed item from Mark Kotsay is worth $4.24.

Most recently, these items with a signature of Mark Kotsay were sold on eBay - click here for more items.

A's hiring Kotsay as manager to replace Melvin (12/20/21): The A's are promoting from within. Mark Kotsay, who played 4 seasons in Oakland and joined the coaching staff in 2016, will take over for Bob Melvin.

Athletics nearing managerial hire; Mark Kotsay among candidates, per report (12/2021): The A's had narrowed their search to six finalists, as of the last public update

MLB rumors: Mark Kotsay entered Giants manager interviews as favorite (10/2019): The Giants still are searching for their next manager, but they reportedly had a favorite entering interviews.

Mark Kotsay to retire after 2013 season (09/2013): A herniated disc in his back suffered in 2003 caused Kotsay a series of pains throughout his career, requiring several epidural injections and, eventually, two surgeries. He did not have the first surgery until spring training of 2007, and played in just 233 games the three following years.

PITTSBURGH -- The San Diego Padres have signed first baseman/outfielder Mark Kot (08/2012): Kotsay was eligible for free agency at the end of the season. The 36-year-old went into Sunday's game against the Pittsburgh Pirates hitting .275 with one home run and nine RBIs in 55 games.

Milwaukee Brewers wobble on Mark Kotsay's aging legs (10/2011): ST. LOUIS - Randy Wolf got a second chance to get it right and now the Milwaukee Brewers have a second life, knowing they will play at least one more game at their friendly retractable dome.