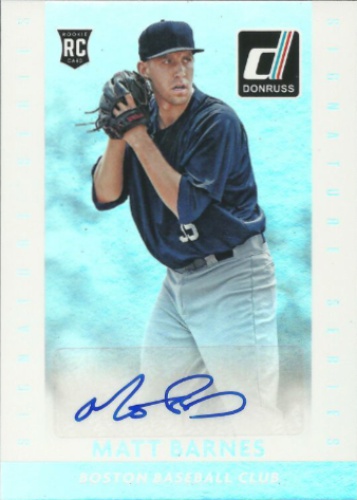 Matthew Kelly Barnes (born March 9, 1980) is an American former professional basketball player who played 14 seasons in the National Basketball Association (NBA). Barnes was drafted in the second round of the 2002 NBA draft by the Memphis Grizzlies. He won an NBA championship with the Golden State Warriors in his last season with the league in 2017. He currently is a basketball analyst for ESPN as well as NBC Sports California for Sacramento Kings games. More about Matt Barnes

Current items with a signature of Matt Barnes

These are the most current items with a signature of Matt Barnes that were listed on eBay and on other online stores - click here for more items.

Traded items with a signature of Matt Barnes

The most expensive item with a signature of Matt Barnes (MATT BARNES AUTO SIGNED CLIPPERS GAME USED JERSEY GAI) was sold in July 2010 for $299.99 while the cheapest item (Matt Barnes autographed signed card auto Los Angeles Lakers Magic UCLA) found a new owner for $0.01 in December 2011. The month with the most items sold (12) was August 2021 with an average selling price of $6.99 for an autographed item of Matt Barnes. Sold items reached their highest average selling price in January 2020 with $99.99 and the month that saw the lowest prices with $0.74 was June 2019. In average, an autographed item from Matt Barnes is worth $6.14.

Most recently, these items with a signature of Matt Barnes were sold on eBay - click here for more items.

Matt Barnes, Nick Pivetta join fellow MLB players in unity against owners (02/04/22): Boston Red Sox pitchers Matt Barnes and Nick Pivetta are among many Major League Baseball players Friday who have taken to Twitter to show their solidarity in the ongoing lockout.

Fixing Matt Barnes might be the most important challenge facing Red Sox (01/19/22): The fall of All-Star closer Matt Barnes was sudden last summer, a development that cost him the closer's role and a spot on the playoff roster. John Tomase looks back at what went wrong and if he's salvageable.

Matt Barnes melts down again in loss to Rays, Red Sox fall to a season-high five (08/11/21): Barnes has taken the loss in three of his past four appearances

Red Sox sign closer Barnes to 2-year extension (07/11/21): Closer Matt Barnes has signed a two-year extension with the Red Sox that runs through the 2023 season and includes a club option for 2024.