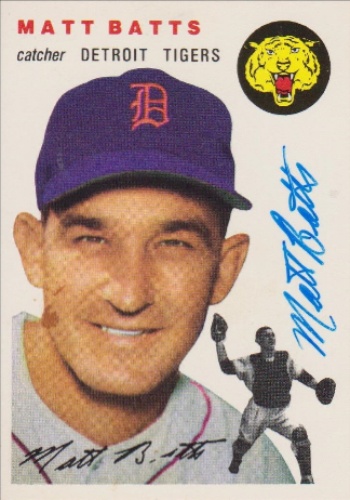 Matthew Daniel Batts (October 16, 1921 – July 14, 2013) was an American professional baseball player. He played in Major League Baseball (MLB) as a catcher from 1947 through 1956 for the Boston Red Sox, St. Louis Browns, Detroit Tigers, Chicago White Sox and Cincinnati Reds, with brief trades to Baltimore and Cleveland. A slap hitter, Batts played mostly backup roles over the course of his career; during parts of ten MLB seasons, he appeared in 546 games with a .269 batting average, 26 home runs, and 219 runs batted in. More about Matt Batts

Current items with a signature of Matt Batts

These are the most current items with a signature of Matt Batts that were listed on eBay and on other online stores - click here for more items.

Traded items with a signature of Matt Batts

The most expensive item with a signature of Matt Batts (MATT BATTS SENATORS SIGNED AUTOGRAPH AUTHENTIC RAWLINGS OAL BASEBALL JSA RARE) was sold in July 2016 for $459.95 while the cheapest item (Matt Batts Autographed Card - Detroit Tigers) found a new owner for $0.50 in January 2010. The month with the most items sold (4) was January 2011 with an average selling price of $2.25 for an autographed item of Matt Batts. Sold items reached their highest average selling price in July 2016 with $232.47 and the month that saw the lowest prices with $0.95 was March 2012. In average, an autographed item from Matt Batts is worth $4.97.

Most recently, these items with a signature of Matt Batts were sold on eBay - click here for more items.

Matt Batts, 91; Red Sox catcher with ‘Summer of ’49’ team (08/02/13): Catcher Matt Batts, who played for the Boston Red Sox from 1947 to 1951, was a resource for the late David Halberstam, author of “Summer of ’49,” which chronicled the American League pennant race between the Yankees and Red Sox, which New York won on the season’s final weekend.

Matt Batts keeps Rams in check in 9-3 win (03/09/13): Batts (2-0) scattered nine hits and struck out four in a season-long outing. He retired the first two hitters of all eight innings, but all nine hits came with two out.