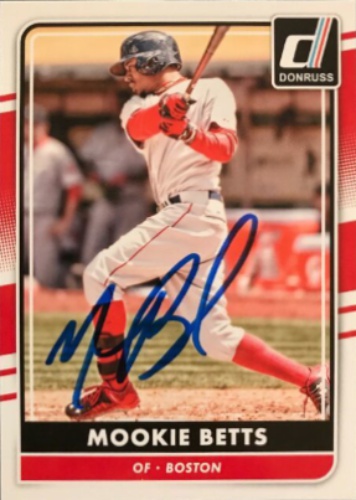 Markus Lynn "Mookie" Betts (born October 7, 1992) is an American professional baseball right fielder for the Los Angeles Dodgers of Major League Baseball (MLB). He previously played for the Boston Red Sox. In 2018, while with the Red Sox, he became the first player in MLB history to win the Most Valuable Player, Silver Slugger, Gold Glove, batting title, and World Series in the same season. More about Mookie Betts

Current items with a signature of Mookie Betts

These are the most current items with a signature of Mookie Betts that were listed on eBay and on other online stores - click here for more items.

Traded items with a signature of Mookie Betts

If you're interested in Mookie Betts Rookie cards you might want to take a look at our sister site that specializes in Baseball Rookie Cards only.

The most expensive item with a signature of Mookie Betts (Mookie Betts 2014 Bowman Chrome Autos Gold Refractors Autographed Rookie) was sold in August 2021 for $24000.00 while the cheapest item (Iconic Ink Boston Red Sox Mookie Betts Benintendi Bradley Autograph Signed A1) found a new owner for $0.50 in August 2019. The month with the most items sold (40) was August 2020 with an average selling price of $184.99 for an autographed item of Mookie Betts. Sold items reached their highest average selling price in June 2022 with $680.44 and the month that saw the lowest prices with $3.25 was December 2015. In average, an autographed item from Mookie Betts is worth $107.75.

Most recently, these items with a signature of Mookie Betts were sold on eBay - click here for more items.

Dodgers' Mookie Betts explains how his leadership style changed when he was trad (07/19/22): Betts will be starting for the NL in front of his home fans in Tuesday night's All-Star Game

Dodgers get Betts back, but drop finale to Padres (07/04/22): Mookie Betts was reinstated from the injured list Sunday and was in the lineup against the Padres, playing right field.

Dodgers' Betts hopeful stay on IL will be short (06/20/22): Mookie Betts is hoping that his latest stint on the injured list only lasts a couple weeks.

Dodgers' Mookie Betts heading to injured list with cracked rib as the injuries m (06/2022): Betts was hurt in an outfield collision Wednesday night

With 'frustrating' hip issue healed, Dodgers' Mookie Betts is 'ready to go' this (03/2022): Dodgers outfielder Mookie Betts said the bone spur in his right hip that hampered him last season is no longer an issue.

Dodgers star Mookie Betts, locked in during MLB lockout, bowls a perfect game (01/2022): The owners imposed the current MLB work stoppage, but at least one player is striking

What if neither the Dodgers or the Red Sox won the Mookie Betts trade? (12/2021): Shipping Mookie Betts to the Dodgers for prospects shook Red Sox Nation to its core, but as our John Tomase writes, two years removed from the transaction neither side appears to be the big winner.

MLB's most popular jerseys: Mookie Betts tops list for second consecutive season (10/2021): Overall, the defending World Series champion Dodgers had the most players in the top 10 with four

LOOK: Mookie Betts retrieves first home run ball for Cincinnati Reds rookie TJ F (09/2021): The Dodgers star got the ball back from a fan so the Reds rookie could keep the memento from his first homer

Betts back from 16-game absence, hitless in win (08/2021): The Dodgers' Mookie Betts was activated from the injured list and went 0-for-3 with a walk Thursday night against the Padres, his first game since Aug. 7.

Life after Mookie Betts: How the Red Sox are built to win without him (04/2021): A lot has changed since Boston won the World Series in 2018. But, if you believe manager Alex Cora, not as much as you might think.

Dodgers fans troll Red Sox with 'Thank you for Mookie Betts' billboard next to F (03/2021): It's quite the troll job by fans of the defending champions

Dodgers star Mookie Betts gets engaged to longtime girlfriend Brianna Hammonds (01/2021): The two have been dating for 15 years

Social media reacts to the Dodgers winning the 2020 World Series (10/2020): The Dodgers won after a controversial pitching change by the Rays and more big plays from Mookie Betts.

Here's how 2020 MLB stat leaders like Shane Bieber, Mookie Betts stack up to the (09/2020): How close did this year's leaders some to setting some 60-game records?

Mookie Betts a late addition to Dodgers' lineup for doubleheader on Thursday fol (08/2020): Betts said he would not have played Wednesday night no matter what

Phillies' J.T. Realmuto explains how Mookie Betts' deal impacts free agent outlo (07/2020): Realmuto will be the No. 1 free agent on the market this offseason

Mookie Betts surprises shoppers in Tennessee with free groceries (05/2020): An act of kindness from the Dodger outfielder

How a shortened 2020 MLB season would make Mookie Betts even more important to t (04/2020): Getting to the postseason won't be quite as easy with a shortened regular season

Samson: Mookie Betts could wind up a free agent without ever playing a game with (03/2020): David Samson discussed the issue of service time if the 2020 season is canceled

Betts draws cheers, drives in run in Dodger debut (02/2020): Mookie Betts still has some work to do as he settles in with the Los Angeles Dodgers.

Did the Dodgers just win the winter? How bad is this for the Red Sox? Grading th (01/2020): As the 2018 AL MVP heads to Hollywood, we break down the Boston-Los Angeles blockbuster.

One window the Red Sox probably won't open into a potential Mookie Betts trade (11/2019): Red Sox fans need no reminder of the havoc a negotiating window can wreak upon a potential trade. But 16 years after the A-Rod deal fell through, will there be similarities with Mookie Betts?

Chaim Bloom, Red Sox brass address Mookie Betts' future in Boston (10/2019): Chaim Bloom was introduced as Chief Baseball Officer of the Boston Red Sox on Monday and was immediately faced with questions regarding the future of Mookie Betts.