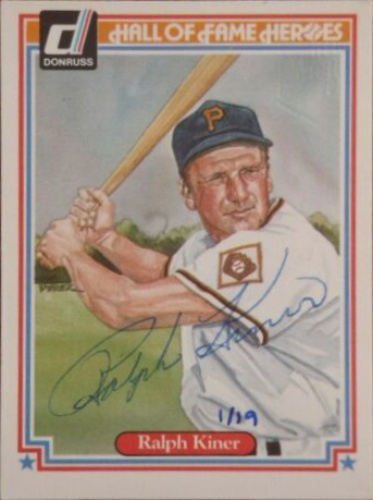 Ralph McPherran Kiner (October 27, 1922 – February 6, 2014) was an American Major League Baseball player and broadcaster. An outfielder, Kiner played for the Pittsburgh Pirates, Chicago Cubs, and Cleveland Indians from 1946 through 1955. Following his retirement, Kiner served from 1956 through 1960 as general manager of the Pacific Coast League San Diego Padres. He also served as an announcer for the New York Mets from the team's inception until his death. Though injuries forced his retirement from active play after 10 seasons, Kiner led all of his National League contemporaries in home runs between 1946 and 1952. He was elected to the Baseball Hall of Fame in 1975. More about Ralph Kiner

Current items with a signature of Ralph Kiner

These are the most current items with a signature of Ralph Kiner that were listed on eBay and on other online stores - click here for more items.

Traded items with a signature of Ralph Kiner

If you're interested in Ralph Kiner Rookie cards you might want to take a look at our sister site that specializes in Baseball Rookie Cards only.

Most recently, these items with a signature of Ralph Kiner were sold on eBay - click here for more items.

Former Mets Broadcaster Ralph Kiner Among 10 Frick Finalists (10/03/14): Former slugger Ralph Kiner and longtime announcer Dick Enberg are among the 10 finalists for the 2015 Ford C. Frick Award presented by the Hall of Fame for excellence in baseball broadcasting.

Mets unveil tribute to Ralph Kiner on Citi Field wall (03/31/14): The Mets honored late broadcaster Ralph Kiner during a pregame ceremony Monday. They unveiled a permanent Kiner logo on the left-field wall at Citi Field that features a microphone, Kiner’s...

Mets will honor Ralph Kiner with uniform patch (02/17/14): The Mets will wear a patch to honor long time broadcaster Ralph Kiner through the 2014 season. Kiner had been in the Mets announcing booth since their birth back in 1962. He passed away earlier this month.

The mind of Ralph Kiner (03/2013): Baseball Hall of Famer Ralph Kiner , a Rancho Mirage resident, is set to begin his 67th consecutive year in the Majors. / Crystal Chatham/The Desert Sun

Ralph Kiner Reflects on 50 Years as a Mets Voice (04/2012): The Hall of Fame slugger Ralph Kiner began broadcasting for the Mets in their first year and is still going a half century later.