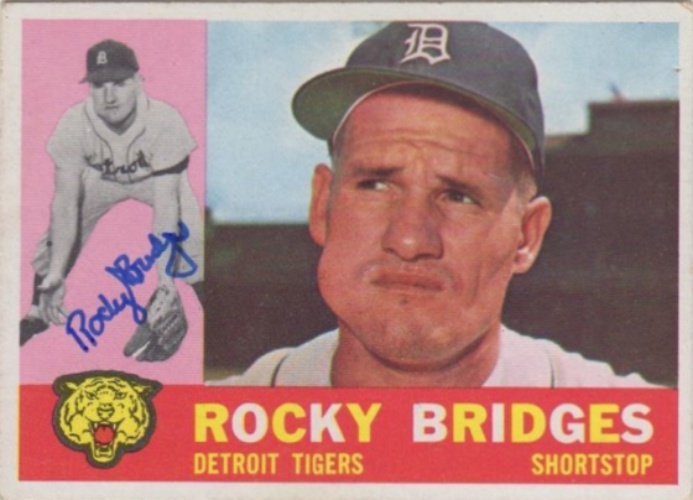 Everett Lamar "Rocky" Bridges (August 7, 1927 – January 27, 2015) was a middle infielder and third baseman with an 11-year career in Major League Baseball from 1951 to 1961. Bridges played for the Brooklyn Dodgers, Cincinnati Redlegs and St. Louis Cardinals of the National League, and the Washington Senators, Detroit Tigers, Cleveland Indians and Los Angeles Angels of the American League. More about Rocky Bridges

Current items with a signature of Rocky Bridges

These are the most current items with a signature of Rocky Bridges that were listed on eBay and on other online stores - click here for more items.

Traded items with a signature of Rocky Bridges

The most expensive item with a signature of Rocky Bridges (Rocky Bridges Signed Baseball; Dodgers, Reds, Angels +4) was sold in May 2011 for $79.95 while the cheapest item (Rocky Bridges 1951 Dodgers Reds Senators Tigers Indians Angels Signed 3x5) found a new owner for $0.40 in March 2012. The month with the most items sold (8) was December 2009 with an average selling price of $5.04 for an autographed item of Rocky Bridges. Sold items reached their highest average selling price in May 2011 with $79.95 and the month that saw the lowest prices with $0.99 was February 2012. In average, an autographed item from Rocky Bridges is worth $4.99.

Most recently, these items with a signature of Rocky Bridges were sold on eBay - click here for more items.

Former Everett Giants manager Rocky Bridges dies at the age of 87 (03/01/15): Rocky Bridges, a journeyman infielder for seven major-league teams, including the Washington Senators, who was one of baseball's all-time great characters, with a quip for every occasion, died Jan. 28 at a hospice in Coeur d'Alene, Idaho. He was 87.

Remembering the late, great Rocky Bridges (02/09/15): With all the buildup to Super Bowl XLIX, we didn't get a chance to give Rocky Bridges a proper sendoff. The colorful, wise-cracking former major league player and longtime minor-league manager recently died. He was 87.

Rocky Bridges, journeyman ballplayer with colorful quips, dies at 87 (02/07/15): Mr. Bridges, a former shortstop for the Washington Senators, was known as one of baseball?s great raconteurs.

Bisons Organization Saddened by Passing of Former Manager, Rocky Bridges (01/30/15): The Buffalo Bisons organization is deeply saddened to learn of the passing of the team's first manager at Coca-Cola Field, Rocky Bridges. He was 87 years old.

ROCKY BRIDGES: 'He was just as funny at home' (01/2015): On a national level, Rocky Bridges may have been known as the king of the one-liners during a long career managing at the minor league level. But to his kids, he was known as a pretty good dad.

STAGE VIEWS: Elmer Gantry Star Charlie Pollock On Rocky, Bridges of Madison Coun (10/2014): What are your current/upcoming projects? Right now I am playing Elmer Gantry in Elmer Gantry at the Signature Theater in DC. It is a great undiscovered American musical, and I am honored to get to play this role.

Understudies from Rocky, Bridges of Madison County, Bullets, Big Fish, Beautiful (03/2014): Musicals Tonight! continues its ongoing salute to Broadway and Off-Broadway standbys, understudies and alternates March 23 at 7 PM with its latest edition of At This Performance&, which is held at The Lion Theatre.

For Rocky Bridges, baseball really was fun and games (07/2011): Former major league journeyman and coach, and longtime minor league manager, is 83 and can still tell hilarious stories and jokes. He doesn't believe that many current players actually enjoy the sport as he did. Rocky Bridges never took himself too seriously.