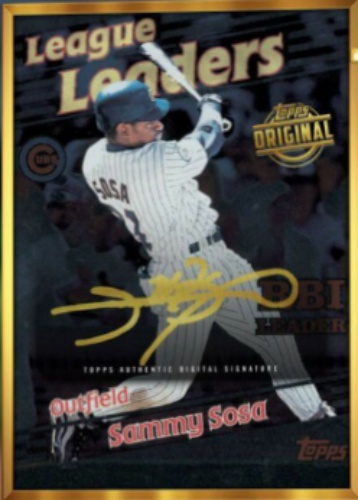 Samuel Peralta Sosa (born November 12, 1968), nicknamed "Slammin' Sammy", is a Dominican-American former professional baseball right fielder. He played in Major League Baseball (MLB) for 19 seasons, primarily with the Chicago Cubs. After playing for the Texas Rangers and Chicago White Sox, Sosa joined the Cubs in 1992 and became regarded as one of the game's best hitters. Sosa hit his 400th home run in his 1,354th game and his 5,273rd at-bat, reaching this milestone quicker than any player in National League history. He is one of nine players in MLB history to hit 600 career home runs. More about Sammy Sosa

Current items with a signature of Sammy Sosa

These are the most current items with a signature of Sammy Sosa that were listed on eBay and on other online stores - click here for more items.

Traded items with a signature of Sammy Sosa

If you're interested in Sammy Sosa Rookie cards you might want to take a look at our sister site that specializes in Baseball Rookie Cards only.

The most expensive item with a signature of Sammy Sosa (Baseball Signed by All but one of The 24 Modern Hitters of 500 HR-Sammy Sosa) was sold in March 2018 for $6500.00 while the cheapest item (Sammy Sosa signed autographed photo with display CUBS) found a new owner for $0.01 in October 2010. The month with the most items sold (40) was June 2008 with an average selling price of $59.73 for an autographed item of Sammy Sosa. Sold items reached their highest average selling price in June 2018 with $249.99 and the month that saw the lowest prices with $8.00 was February 2013. In average, an autographed item from Sammy Sosa is worth $49.99.

Most recently, these items with a signature of Sammy Sosa were sold on eBay - click here for more items.

How ex-Cubs OF Sammy Sosa could still make Hall of Fame (01/26/22): While one annual, decade-long debate is over, its not the end of Sammy Sosas Hall of Fame candidacy.

Hall of Fame: Ex-Cubs OF Sammy Sosa not elected, falls off ballot (01/25/22): Sosa falls off the Hall of Fame writers' ballot after not being elected in his 10th and final year of eligibility

Baseball Hall of Fame 2022: Sammy Sosa set for one final swing at Cooperstown (01/17/22): Despite 609 career home runs and seven All-Star appearances, the former Cubs slugger hasn't come close to being elected in his nine years.

Should playing days' 'Fame' play a factor in Hall of Fame cases like Sammy Sosa? (01/26/21): For those who don't care about Sosa's alleged PED ties, here's an additional component to consider

Sammy Sosa thinks Cubs will eventually welcome him back to Wrigley Field: 'That (06/15/20): The former Cubs slugger currently has a fractured relationship with the franchise

How Sammy Sosa's historic June turned the 1998 home run race into a two-slugger (06/2020): Twenty-two years ago, Sosa stormed onto the scene with a record-breaking month of June

Sammy Sosa continues to languish on Hall of Fame ballot; is he right in saying h (01/2020): Sosa doesn't enjoy near the support of Bonds and Clemens

Sammy Sosa continues fade in Hall of Fame voting, barely survives for '16 (01/2015): Sammy Sosa probably has one more shot on the Hall of Fame ballot before putting his faith in a future Veterans Committee.

JAWS and the 2015 Hall of Fame ballot: Sammy Sosa (12/2014): With his Hall of Fame support slipping for two straight voting cycles, Sammy Sosa is more likely to fade off the ballot in 2015 than find his way into Cooperstown.

Sammy Sosa Rumors Heat Up After Cubs Hire Manny Ramirez (05/2014): Could Sammy Sosa return to the Chicago Cubs in some capacity?This is a question which CSNChicago.com Cubs Insider Patrick Mooney tried to answer in his May 25 article: "The cold war between the...

Sammy Sosa: “The Cubs know where to find me” (04/2014): Sammy Sosa talked about not being invited to Wrigley Field's 100th birthday party.

2014 Hall of Fame profile: Sammy Sosa (12/2013): Sosa's case starts and ends with home runs. Sure, there was more to his career than just power -- he stole 234 bases, he rated as a fantastic defender in right field during his 20s, and he eventually developed good plate discipline in his early 30s.

Sammy Sosa Bought A $7.6 Million Oceanfront Home In Miami (11/2013): The home is right on the beach and has a pool, koi pond, a courtyard, and a terrace overlooking the ocean. Nelson Gonzalez, the listing agent, told the Real Deal Sosa's new pad "is one of the most beautiful homes in all of Golden Beach.”

Kap’s exclusive interview with Sammy Sosa (10/2013): The former Cubs slugger talks about a desire to make amends with the Cubs organization, the difficulties of losing to the Marlins in 2003, miscommunication on his way out of Chicago that led to some ill feelings and more! Click …

TTYM: Eminem Crashes Michigan Game, Smack-Talking 7-Year Old And Sammy Sosa Is T (09/2013):   by @TaraLipinskyMore Columns here. Jet’s Fight Crew In case you haven’t heard –  Jets’ fans have an awful reputation of getting angry and belligerent during games. I have no idea why. Story via CBS New York Can […]

Anthony Adams mocks Sammy Sosa ’s Pinterest page with a Pinterest page of his ow (02/2013): Anthony Adams hasn't played in the NFL since being cut by the Chicago Bears last offseason and is currently taking college courses while waiting for another opportunity in the league. Luckily for us, Adams' loss is our gain as the … Continue reading →

Baffoe: Outcasting Sammy Sosa Is Hypocritical (01/2013): Sammy Sosa is one of the game’s Marlboro Men, a mascot of old that seems so wrong today.

COLUMNIST: Hometown writers saying no to Sammy Sosa (11/2012): Sammy Sosa probably has a better chance of winning a Powerball jackpot than getting into the Baseball Hall of Fame next year.

Wisch: Would Fans Want Sammy Sosa Back At Wrigley? (09/2012): I don’t think they want to see No. 21 tap his heart at home plate any time in the foreseeable future – and probably for much longer.