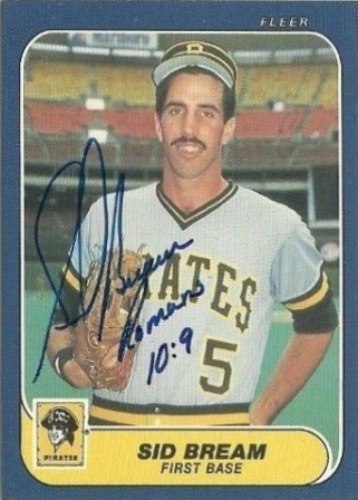 Sidney Eugene Bream (born August 3, 1960) is an American former professional baseball first baseman. From 1983 through 1994, he played in Major League Baseball (MLB) for the Los Angeles Dodgers (1983–85), Pittsburgh Pirates (1985–90), Atlanta Braves (1991–93), and Houston Astros (1994). He is best remembered for his game-winning run scored in the 1992 National League Championship Series (NLCS) that sent the Braves to the World Series. More about Sid Bream

Current items with a signature of Sid Bream

These are the most current items with a signature of Sid Bream that were listed on eBay and on other online stores - click here for more items.

Traded items with a signature of Sid Bream

The most expensive item with a signature of Sid Bream (Sid Bream Signed Bobblehead With Inscriptions) was sold in April 2018 for $200.00 while the cheapest item (Sid Bream Atlanta Braves Autographed 1992 Upper Deck Card #495. See description) found a new owner for $0.50 in June 2019. The month with the most items sold (13) was December 2017 with an average selling price of $3.99 for an autographed item of Sid Bream. Sold items reached their highest average selling price in April 2018 with $200.00 and the month that saw the lowest prices with $0.99 was February 2019. In average, an autographed item from Sid Bream is worth $9.95.

Most recently, these items with a signature of Sid Bream were sold on eBay - click here for more items.

Braves coach returns a bat that his idol Sid Bream once gave him (07/27/14): Already a subscriber? Subscribe today for full access on your desktop, tablet, and mobile device. Already a print edition subscriber, but don't have a login?

Sid Bream Hates His Name: Athletes' Replies To Fans (11/12/13): A few weeks back we asked you to send along any notes or letters you've received after writing to pro athletes. Varsity Letters is a hopefully semi-regular feature in which we share some of our favorites. Please send your athlete responses to me at barryp@deadspin.com . Read more...

Sid Bream Going To Game, Hoping For A Pirates Win In Play-In Game (09/30/13): Despite his history playing against the Pirates, former Pirate Sid Bream says he's still pulling for the Pirates in the playoffs and is even more excited for their fans to get the playoff team they've long deserved.

Former Brave Sid Bream wows fans at expo (01/2013): CHATSWORTH — Without his most famous play, Sid Bream believes he would’ve fallen into obscurity and not many would remember him.

Young hunter has winning trip with Sid Bream (07/2012): Wyatt Boatwright has never been one to play with toys. But put a rifle or fishing rod in his hand, and suddenly he's like a kid in a candy store.