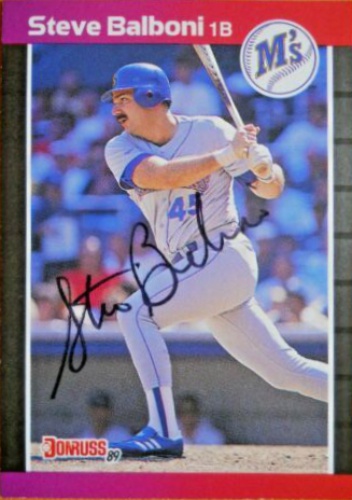 Stephen Charles Balboni (/bælˈboʊni/; born January 16, 1957) is an American former Major League Baseball player, who played for the New York Yankees, Seattle Mariners, Kansas City Royals, and Texas Rangers. He was a player with home run power and a tendency to strike out. He was nicknamed "Bye Bye" because of his home run hitting prowess. He was also known by the nickname "Bones", which is a malapropism for Balboni. He is also known for the "Curse of the Balboni", an idea written about by Rany Jazayerli which said no baseball team with a player hitting more than 36 home runs for that team could win the World Series. Since Balboni was the last player to hit 36 home runs and win a World Series, (1985 Royals), the curse bore his name. The curse ran from 1985 until Luis Gonzalez and the Arizona Diamondbacks won the 2001 World Series. More about Steve Balboni

Current items with a signature of Steve Balboni

These are the most current items with a signature of Steve Balboni that were listed on eBay and on other online stores - click here for more items.

Traded items with a signature of Steve Balboni

The most expensive item with a signature of Steve Balboni (STEVE BALBONI 2 SIGNED AUTOGRAPHED OAL BASEBALL! Royals, Yankees! 1985 WSC!) was sold in June 2020 for $73.99 while the cheapest item (STEVE BALBONI AUTO SIGNED 1987 Topps 240 Kansas City KC Royals AUTOGRAPH Omaha) found a new owner for $0.01 in September 2012. The month with the most items sold (12) was March 2022 with an average selling price of $3.00 for an autographed item of Steve Balboni. Sold items reached their highest average selling price in December 2018 with $25.00 and the month that saw the lowest prices with $0.49 was December 2010. In average, an autographed item from Steve Balboni is worth $2.99.

Most recently, these items with a signature of Steve Balboni were sold on eBay - click here for more items.

Nats Journal: Giants scout Steve Balboni saw Nationals as ‘best team in baseball (10/22/14): After Steve Balboni scouted the Nationals for the Giants, he viewed them as the most complete team in the playoffs.

Steve Balboni, or adopting random favorite baseball players (01/17/14): So many players come and go from the league and make almost no impression on us at all. Sometimes a guy comes into the league and we take an instant dislike to them, no matter how many household appliances they save from a burning building.