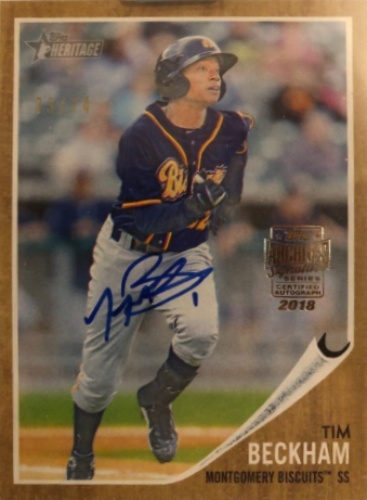 Timothy Lamar Beckham (born January 27, 1990) is an American professional baseball infielder in the Minnesota Twins organization. He previously played in Major League Baseball (MLB) for the Tampa Bay Rays, Baltimore Orioles, and Seattle Mariners. Beckham was the first overall selection of the 2008 MLB draft by the Rays, and received a signing bonus of $6.15 million. He made his MLB debut in 2013, and played for the Rays through 2017, when they traded him to Baltimore. More about Tim Beckham

Current items with a signature of Tim Beckham

These are the most current items with a signature of Tim Beckham that were listed on eBay and on other online stores - click here for more items.

Traded items with a signature of Tim Beckham

The most expensive item with a signature of Tim Beckham (TIM BECKHAM SIGNED AUTO BASEBALL BAT #1 PICK RAYS ESM) was sold in July 2008 for $127.50 while the cheapest item (Autograph Tim Beckham Rookie Baseball Card 333/499 Razor) found a new owner for $0.75 in July 2022. The month with the most items sold (10) was December 2010 with an average selling price of $14.99 for an autographed item of Tim Beckham. Sold items reached their highest average selling price in August 2008 with $55.12 and the month that saw the lowest prices with $0.75 was July 2022. In average, an autographed item from Tim Beckham is worth $13.53.

Most recently, these items with a signature of Tim Beckham were sold on eBay - click here for more items.

Tim Beckham injury: Rays IF tears ACL, out for part of 2014 (12/13/13): While the former first overall pick wasn't likely to make the major league roster out of spring training, he seemed poised to be one of the first call-ups in the event the Rays required middle infield help.

Rays Prospect Tim Beckham Jukes Catcher to Evade Tag at Home Plate (06/02/13): It’s only been five years, but it seems like forever ago that the Rays made Tim Beckham the No. 1 overall pick in the MLB draft. The 23-year-old is now in his third year at the Triple-A level and has yet to sniff the major leagues. Beckham showed off the athleticism that once made him […]