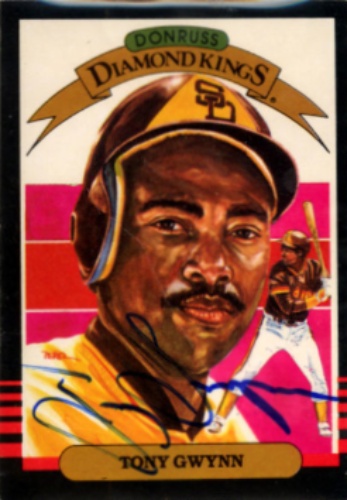 Anthony Keith Gwynn Sr. (May 9, 1960 – June 16, 2014), nicknamed "Mr. Padre", was an American professional baseball right fielder, who played 20 seasons (1982–2001) in Major League Baseball (MLB) for the San Diego Padres. The left-handed hitting Gwynn won eight batting titles in his career, tied for the most in National League (NL) history. He is considered one of the best and most consistent hitters in baseball history. Gwynn had a .338 career batting average, never hitting below .309 in any full season. He was a 15-time All-Star, recognized for his skills both on offense and defense with seven Silver Slugger Awards and five Gold Glove Awards. Gwynn was the rare player in his era that stayed with a single team his entire career, and he played in the only two World Series appearances in San Diego's franchise history. He was inducted into the Baseball Hall of Fame in 2007, his first year of eligibility. More about Tony Gwynn

Current items with a signature of Tony Gwynn

These are the most current items with a signature of Tony Gwynn that were listed on eBay and on other online stores - click here for more items.

Traded items with a signature of Tony Gwynn

If you're interested in Tony Gwynn Rookie cards you might want to take a look at our sister site that specializes in Baseball Rookie Cards only.

Most recently, these items with a signature of Tony Gwynn were sold on eBay - click here for more items.

Tony Gwynn's bat was his magic wand (05/09/20): Let's keep this simple: Tony Gwynn could hit. "Some hitters use bats as more of a battering ram," one former teammate said. "Tony used his bats more as a paintbrush."

Baseball begins Tony Gwynn Legacy with 3-2 victory over Utah (02/23/19): San Diego State baseball opened up the 2019 Tony Gwynn Legacy by defeating University of Utah, 3-2, on Feb. 22 at Tony Gwynn Stadium. Sophomore left fielder Matt Rudick delivered a go ahead RBI single in the bottom of the eighth inning to help lift the Aztecs (4-1) to a win. Rudick’s RBI came after.

Tony Gwynn Jr.: Manny Machado Signing With Padres Is Good For Baseball (02/22/19): Former MLB outfielder Tony Gwynn Jr., now an analyst for the San Diego Padres on television and radio, believes that former Orioles infielder Manny Machado signing with a low-profile team such as the Padres is a good thing for baseball.

Baseball begins Tony Gwynn Legacy with 3-2 victory over Utah (02/2019): San Diego State baseball opened up the 2019 Tony Gwynn Legacy by defeating University of Utah, 3-2, on Feb. 22 at Tony Gwynn Stadium. Sophomore left fielder Matt Rudick delivered a go ahead RBI single in the bottom of the eighth inning to help lift the Aztecs (4-1) to a win. Rudick’s RBI came after.

Tony Gwynn items set for auction (04/2015): More than 100 items from Tony Gwynn's career, including All-Star Game rings, a pair of Silver Slugger batting awards and some of the original contracts he signed, will be put up for auction.

Is there room in today's baseball for another Tony Gwynn Sr.? (01/2015): There have never been many players like Tony Gwynn Sr., with his combination of high batting averages and very few strikeouts. But one does wonder if today's game even allows for such a player, at least one as great as Gwynn was.

Author Rich Wolfe: Tony Gwynn: He Left His Heart in San Diego (11/2014): KUSI has an exclusive look at the new book about Tony Gwynn's life by Rich Wolfe

Plans to dedicate stretch of I-15 to Tony Gwynn (10/2014): A stretch of Interstate 15 could soon be named after the late Tony Gwynn.

Tony Gwynn Parkway runs into a wall of money (09/2014): Caltrans estimates it would cost $400,000 to change signs. But could lightning strike?

Tony Gwynn Day Declared Under Acting Governor (07/2014): SACRAMENTO — A San Diego lawmaker who briefly filled in as governor declared Tony Gwynn Day in honor of the late Padres baseball player. Assembly Speaker Toni Atkins proclaimed Wednesday as a day to remember the Hall of Famer who spent his entire career with the Padres.

Aztecs Rally Around Tony Gwynn Bobblehead (05/2014): Hall of Famer Tony Gwynn isn't with his San Diego State Aztecs as they head to the NCAA regionals for the second straight season. Then again, he is there.

Tony Gwynn to coach Aztecs baseball amid treatment (02/2014): SAN DIEGO – Tony Gwynn has returned for another season as the head coach of San Diego State’s Aztecs baseball team, despite recent cancer treatments. In 2012, Gwynn underwent surgery to remove a tumor from his right cheek in 2012. …

Watch Tony Gwynn Jr. let glove do the talking when heckler pipes up (04/2013): Tony Gwynn Jr. , come back. Don’t care if you hit a buck fifty, that you’re currently batting .207 at triple-A Albuquerque. Baseball could use more of this kind of humor.

Nothing guaranteed for Strasburg, just ask Tony Gwynn (10/2012): Tony Gwynn knew he'd eventually be asked to comment on "the most competitive young player I've ever met."

Tony Gwynn Might Have A Frank McCourt Problem With Padres As Investor (06/2012): Hall of Famer Tony Gwynn reportedly wants to buy the San Diego Padres as part of a group led by Thomas Tull, the CEO of Legendary Entertainment. Current team owner John Moores is looking to sell the Major League Baseball team for $800 million.

RAMSEY: Tony Gwynn brings his Aztecs to Air Force (04/2012): Tony Gwynn awoke on Valentine's Day after undergoing 14 hours of surgery to remove a malignant growth from his right cheek. Earlier this week, he described how he felt when he opened his eyes. "Great," he said. "I felt great." That's how Gwynn greeted the world after...

By The Numbers: Tony Gwynn And Smokeless Tobacco In Baseball (03/2012): For Tony Gwynn, his repeated use of chewing tobacco during his twenty year career has caused his recent struggles with mouth cancer.

Tony Gwynn is in good spirits following complicated surgery (02/2012): Doctors who operated on Tony Gwynn said it appears the Hall of Fame outfielder's cancer has not spread.

Tony Gwynn says he's 'about back to normal' (02/2011): LOS ANGELES — The most famous smile in San Diego couldn't be seen over the phone line, but it could be heard. It could be heard when Tony Gwynn light-heartedly talked about how much easier it was to hit a baseball than fight for his life.

Tony Gwynn: Back in the Swing of Things (01/2011): The former Padre makes one of his first appearances since completing cancer treatment.