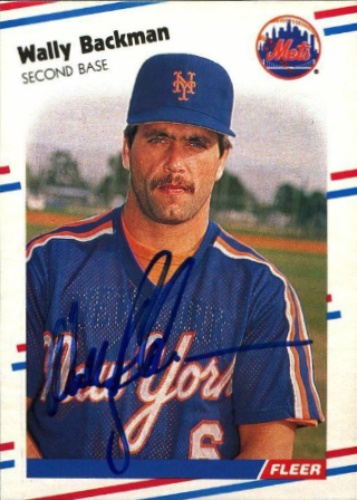 Walter Wayne Backman (born September 22, 1959) is an American former Major League Baseball second baseman. He is best known for his time with the New York Mets from 1980-1988 and was a member of their 1986 World Series-winning team. He was also the former manager for the Las Vegas 51s, the Mets' AAA minor league team, from 2013 to 2016. He served as the bench coach for the Pericos de Puebla of the Mexican Baseball League in 2017. He is currently the manager of the Long Island Ducks of the Atlantic League of Professional Baseball. More about Wally Backman

Current items with a signature of Wally Backman

These are the most current items with a signature of Wally Backman that were listed on eBay and on other online stores - click here for more items.

Traded items with a signature of Wally Backman

The most expensive item with a signature of Wally Backman (Wally Backman New York Mets 1986 WSC Signed Baseball Lot) was sold in July 2019 for $149.99 while the cheapest item (1983 Topps - signed card - WALLY BACKMAN) found a new owner for $0.01 in October 2014. The month with the most items sold (11) was December 2010 with an average selling price of $9.99 for an autographed item of Wally Backman. Sold items reached their highest average selling price in January 2017 with $49.00 and the month that saw the lowest prices with $0.97 was December 2012. In average, an autographed item from Wally Backman is worth $6.00.

Most recently, these items with a signature of Wally Backman were sold on eBay - click here for more items.

Wally Backman will not join the major league coaching staff with the Mets in 201 (10/04/14): Backman has been offered the opportunity to manage the Mets' Triple-A affiliate in Las Vegas once again, but it's unclear whether he will return.

Mets won't add Wally Backman to coaching staff next season (10/04/14): He managed the Las Vegas club to a postseason appearance this year and earned the Pacific Coast League's manager of the year award.

Mets not giving Wally Backman promotion (10/02/14): Despite continued success at the minor league level, Backman will not be promoted to the staff next season, a source told Record baseball columnist Bob Klapisch. Backman has been offered the Class AAA Las Vegas managerial job once again, but it’s uncertain if he will return.

Mets could make coaching staff change, shuffling Wally Backman and Tim Teufel (09/23/14): Backman is currently on the Mets staff for the final nine games of this season after guiding the minor league affiliate to the playoffs for a second straight season.

Report: Wally Backman Could Stick With Mets For 2015 (09/23/14): The Mets are keeping their front office intact, and manager Terry Collins is expected to return next season. Then there's the case of fan favorite Wally Backman.

Mets could make coaching staff change, shuffling Wally Backman and Tim Teufel (09/2014): Backman is currently on the Mets staff for the final nine games of this season after guiding the minor league affiliate to the playoffs for a second straight season.

Triple-A baseball: Wally Backman battling way back up to top (05/2014): Wally Backman knows what it takes to win in professional baseball. He was a World Series champion as a player in 1986 with the New York Mets, has been a successful manager in the minor leagues and

Wally Backman Returns as 51s Manager in 2014 (01/2014): LAS VEGAS: The Las Vegas 51s professional baseball team of the Pacific Coast League (PCL), Triple-A affiliate of the New York Mets, announced today, in conjunction with the Mets Media Relations Department, that Wally Backman will return as manager for the Mets Triple-A affiliate for the 2014 season.

Wally Backman likely to be invited back to manage Mets' Triple-A club, Sandy Ald (09/2013): Backman led the Triple-A team in Las Vegas to an 81-63 record and a division title

Wally Backman reportedly irks Mets with comments about how to fix Ike Davis' swi (06/2013): The Triple-A manager later said he was "sorry if [he] ruffled any feathers."

Wally Backman’s Inspiring Speech to His Team Included a Sea of Expletives (04/2012): The guy manages with a relatively delicate touch.

Ex-Met Wally Backman still dreaming big (05/2011): NEW BRITAIN — Wally Backman admits he’d rather be on another field, but as he iced his arm Wednesday afternoon after throwing batting practice to the Binghamton Mets players he manages, the former New York Mets infielder smiled.